Posted on 4 Sep 2015 by The Manufacturer

Professor Sir Mike Gregory from the Cambridge Institute for Manufacturing gives his retrospective account of the past, present and future outlook of the UK manufacturing sector ahead of his retirement this month.

At first glance many of the products we use today look pretty similar to the ones we were using 50 years ago.

Aeroplanes; cars; washing machines; fridges; televisions, and lawnmowers all look pretty much the same. A bit sleeker and neater perhaps, but completely recognisable in both form and function. 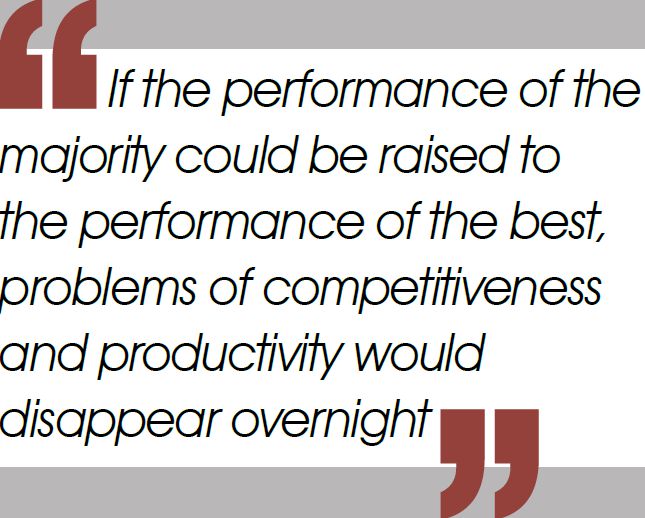 The same might be said for factories. Cleaner and tidier no doubt and with rather fewer people, but still machines processing materials as they flow more or less smoothly through the plant.

So has anything really changed or has it just got a bit more efficient? In fact I would like to argue that things have changed dramatically.

It should be no surprise that the things we use have remained largely people-shaped and people-sized.

The way they are made, however, has raced ahead in ways that are not obvious on the surface – and I believe we are on the brink of a rapid acceleration in the pace of change for manufacturing.

It is customary to observe that manufacturing as a proportion of the economy has declined. Some of that decline is simply a re-labelling of activities from inside to outside the factory, but much is real, reflecting the growth of services which was only to be expected as societies became more affluent. 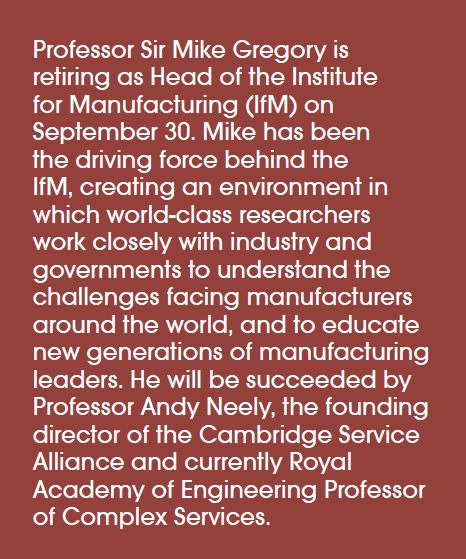 At the risk of stretching the analogy too far, our modern understanding recognises that manufacturing can be the ‘brain’ of the economy – integrating and co-ordinating ideas and actions to achieve strategic purposes.

Modern manufacturing is increasingly recognised as the full cycle from understanding markets through design, production, distribution and service and increasingly connected digitally.

It is also true that when we look at people we don’t see the brain at all, rather like manufacturing. Most people have never been inside a factory and seen the complexity of what goes on.

It is this very ‘invisibility’ of manufacturing that masks the huge progress that has been made in the past 50 years and the revolution to come.

It used to be said that manufacturing was about materials, men (and women), machines and money and perhaps those are useful perspectives on the changes that have taken place.

Materials used to be fairly straightforward. Typically metals, they would be mined and refined and then delivered in various forms to factories where they would be shaped to meet the needs of the product.

Today we have a wide variety of materials from plastics to ceramics, and most recently graphene – all capable of being configured in different ways so that materials themselves can be designed to suit particular applications. Still to come is the much wider use of natural materials.

Fifty years ago we would have seen factories full of people. Many would have been doing practical hands-on jobs using individual machines to shape materials.

The speed and accuracy of production depended very heavily on the skills of people on the shop floor. Today there are roughly the same numbers of people doing professional and managerial jobs as there are manual jobs.

Some of the practical skills have been captured in automated machinery, software and planning.

In the wider manufacturing system there have also been dramatic changes. Armies of people progressing orders and scheduling production have been replaced by computer systems.

Even the final transactions which used to take place in shops are now done over the internet. Almost everything can now be ordered from the comfort of our armchairs.

Many machines look very much the same as they did 50 years ago. The functions of cutting, forming and coating materials have not changed dramatically though there are some new entrants such as lasers and, more recently, additive processing machines.

But the real step forward is in sensing and control. Where once sophisticated skills were needed to set and run machines, today tested programmes can be downloaded to fashion a huge range of products.

And the machines can be networked together globally as well as locally so that operations can be monitored from wherever is convenient.

The reawakening of interest in manufacturing has led to a realisation that banks could do more to assist manufacturers.

It has been increasingly recognised that small and growing companies used to be well served by local banks and managers who really understood the businesses and could provide support and guidance rather than just money. There is some evidence of a welcome return to this style of banking.

So what do we need to do in education, research and practice to take advantage of these trends and opportunities?

Education is at the root of a robust modern industrial economy.

Education of the general public to understand the role of manufacturing in the economy. Education in schools to stimulate interest and enthusiasm for the foundational principles of science and technology. Education at universities to ensure that the UK has the people to keep it in the first division of technological nations.

Research is needed not just to uncover new scientific insights but to explore how these insights can be translated into technologies and in due course wealth creating activities.

Research is also essential to understand how to make better use of the things we already know. Nowhere is this more important than in understanding how to make goods using less energy and less material and extending their life rather than throwing them away prematurely.

Sharing and developing good practices is at the heart of a healthy industrial economy. There are huge opportunities for industry, academe and government to come together to make appropriate expertise rapidly available to companies where they need it when they need it.

I have had the privilege of being involved with manufacturing and observing the fascinating trends and developments. There has never been a more exciting time.

Modern manufacturing can provide interesting jobs, raise standards of living for producers and users and do all this while preserving the planet for future generation. Big challenges. Great fun!