Posted on 7 Sep 2021 by The Manufacturer

Smart manufacturing is the buzz-phrase of the moment, but is there enough tangible advice out there on how to implement the concept? We talked to two pioneering companies who are working together to put theory into practice.

Smart manufacturing is an often-used buzz-phrase with management consultants, IT providers and security experts, among many others, all of which have plenty to say on the benefits.

“I think one of the problems at the moment is that what you read is still very theoretical,” says Alan Mucklow, Managing Director, UK, Eire and National Distributors at Yamazaki Mazak. “But for large parts of the UK’s manufacturing supply chain, theory is not enough. They need practical advice, not just about the benefits, but about how they can actually implement Industry 4.0.

Mazak has helped dozens of subcontract manufacturers across the UK implement a smarter manufacturing approach, including Beverston Engineering, a precision engineering company based on Merseyside that manufactures precision machine parts for critical industries including aerospace, pharmaceutical, oil and gas.

“We’re always looking for better ways of doing things and cutting out waste, and Industry 4.0 was one of the tools I discovered about three or four years ago through a Liverpool City Region project called LCR 4.0, in partnership with Liverpool John Moores University,” says Owner and Director, Rod Wah. “We upgraded the network and once that was in place, Mazak engineers came in and installed the smart boxes, configured our machines to work with MT Connect and the software.”

“Beverston approached us because they wanted to be able to take data from the machine and integrate it into their ERP system,” says Alan. “The first phase was to monitor the machines with MT Connect, which then exports the data to the Smooth Monitor AX software sitting on their server.

“From there we can take the data, run data enquiries and integrate into their MRP systems. In effect iSmart factory has created a seamless integration of factory and office network.” 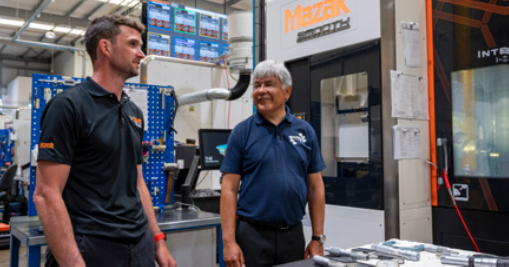 Network security was a  key issue for Beverston. “The security of the Mazak smart boxes was a key feature. Obviously, if you’re connecting all your machines to the internet, you need excellent security,” says Rod.

“The Smooth Monitor AX software has been really a good visual tool. We have a large screen on the shop floor which continually monitors the status of the machines. Everybody can see where machines are down or if there’s an alarm on the maintenance guys can instantly see what’s going on.

“We have screens in the office as well that show the managers and the supervisors live information, so if they see a machine has stopped for any reason they can instantly react and go out and see what the problem is.” The overall effect for Beverston has been dramatic.

“Although we’re only fairly early on in the project, we have seen a reduction of 23 per cent on setting time and downtime, and we have seen a relative 40 per cent increase in machine utilisation. That’s just come naturally without doing anything really other than monitoring and showing the information to people.”

“The modern machine tool and factory is capable of generating huge amounts of data,” says Alan. “The key lies in using protocols and technology like MT Connect and Smooth Monitor AX to collect and sort the data, to aid decision-making.”

He concludes: “Collaboration between machine manufacturer and user is the key to implementing smart manufacturing. You need to be able to trust, troubleshoot and problem solve together to take the theory and put it into practice.”

Other stories from The Manufacturer