Rolls-Royce has been making significant strides towards the augmentation of its electrification offering to the world via three important projects in Europe and the UK.

Between seizing controlling interest in a Berlin-based electricity storage firm, pioneering a revolutionary electrical power system for the Ministry of Defence, and launching an advanced manufacturing hub for efficient jet engines in Bristol – and all in the first month of a new decade -Rolls-Royce could be said to be ‘taking charge’ of the EV marketplace.

The “electric revolution” is one means by which countries – not least the UK – are seeking to reduce their carbon emissions output. Another obvious benefit, for manufacturing purposes, is the innovative production, storage, and consumption of energy sources both in manufacture and the products themselves. (More ‘power’ to those with an integrated circular economy piece).

But Rolls-Royce appears to be satisfying all aspects of the electrification criteria with ‘shocking’ dexterity.

The first announcement made by Rolls-Royce was a new facility in Bristol that will focus on carbon-fibre composites used in the aerospace industry.

Beginning this month, the company will develop lighter fan blades and cases that will significantly reduce the weight of the Rolls-Royce UltraFan engine demonstrator, a new design that will lower aircraft fuel consumption and CO2 emissions by at least 25% compared to previous iterations.

The carbon-fibre composites fan system is capable of saving almost 700kg per aircraft, the equivalent of seven passengers with luggage.

Rolls-Royce has been developing carbon-fibre materials for many decades and already uses the technology for various parts within its engines. Its techniques have been developed in partnership with the National Composites Centre in Bristol, and the Rolls-Royce University Technology Centre at the University of Bristol.

In addition to being a “low-energy, very low emission” facility using automated materials and processes, the launch of the £25m Bristol-based manufacturing hub will also mean 150 new jobs are created in the city.

Rolls-Royce has developed a three-point environmental approach to achieving its net zero carbon target by 2030:

The Tempest programme is a fighter jet concept currently under development in the United Kingdom for the Royal Air Force (RAF) and the Italian Aeronautica Militare (AMI).

‘Team Tempest’ is a consortium consisting of the Ministry of Defence (MoD), Leonardo, BAE Systems, MBDA, and Rolls-Royce to replace the Eurofighter Typhoon class by 2035 with a new aircraft (Tempest) that will be able to fly unmanned, incorporate AI, and possess directed-energy weapons such as laser, microwaves and particle beams.

Then in 2017 it launched the second phase of the E2SG programme which saw huge investment in an integrated electrical facility, as well as a second electrical generator and an energy storage system to manage the supply of power.

Rolls-Royce is now exploring the viability of using dual spool generation in its engine to influence its “operability, responsiveness and efficiency”, while developing a Power Manager intelligent control system which uses AI to make real time judgements about the aircraft’s electrical supply and demand requirements while optimising other factors.

Rolls-Royce also intends to showcase a full-scale demonstrator of an advanced power and propulsion system as part of the Tempest programme. 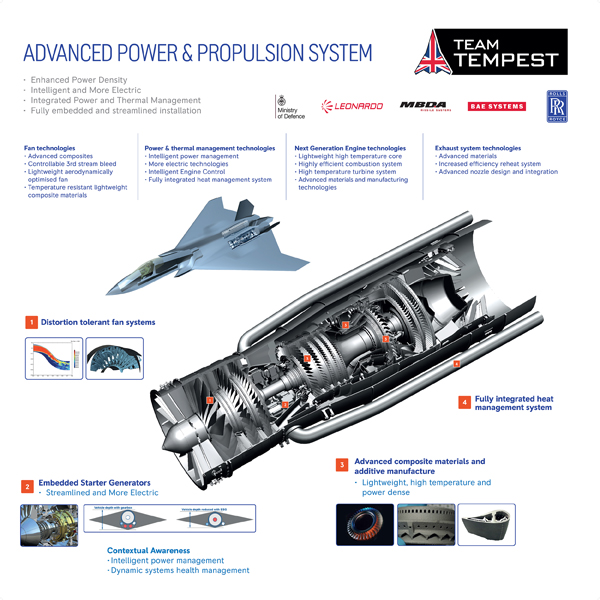 The third arm in Rolls-Royce’s recent electrification expansion announced this month is a more than 73% share it acquired in German electricity storage specialist Qinous, up from a nearly 20% stake acquired in 2018.

It will also absorb all other financial interests related to Qinous, including Berlin-based investment holdings company IBB Beteiligungsgesellschaft.

Qinous is a relatively young battery storage systems and associated control systems start-up, with a global footprint in storage solutions.

The collaboration will give rise to a product range that will enable the configuration of solutions from 30 kW/30kWh to several megawatts. “The range of services and deliverables covers the needs of commercial enterprises, municipal utilities, energy suppliers, and even sizeable industrial plants,” added Cordelia Thielitz, vice president of Rolls-Royce’s Microgrid Solutions business.