Rolls-Royce is leading the “largest national engineering collaboration the UK has ever seen” to build a series of mini nuclear power stations that it claims could deliver up to £400bn in global exports, 40,000 skilled jobs, and affordable, low-carbon electricity for decades to come.

The announcement by Rolls-Royce outlines a bold strategy to revolutionise the UK’s position in the global energy market, with a portfolio of small modular reactors (SMR) across parts of the UK and Wales that early reports indicate received an initial £18m grant from the government in November 2019, matched by the consortium.

A joint investment of £500m between Rolls-Royce and the government was proposed some months earlier. 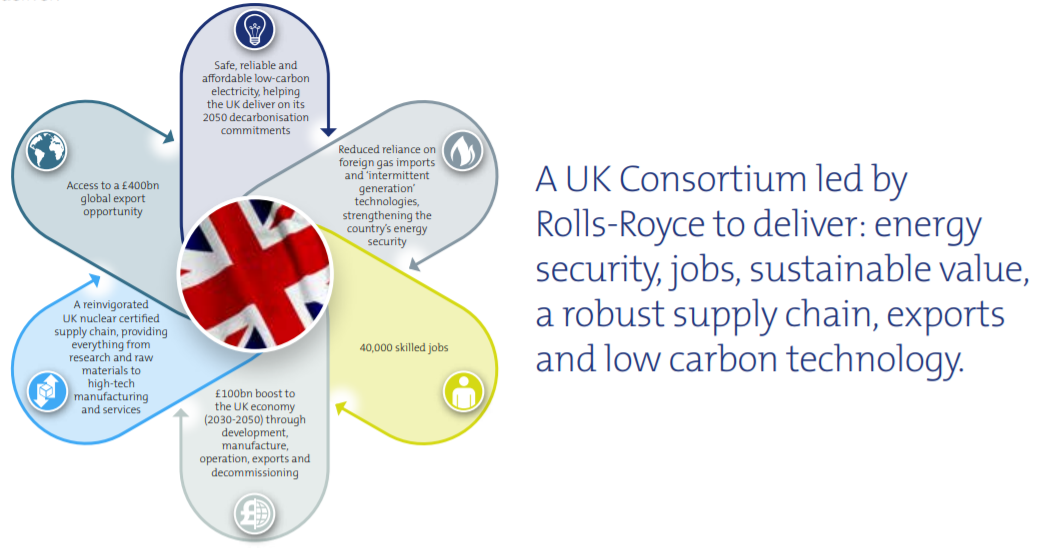 The consortium will also build manufacturing sites where the small pre-fabricated modules will be made before being taken to their respective locations for construction.

One of the locations under consideration is Moorside, Cumbria and Wylfa, North Wales, where proposals for large-scale reactors have, according to newspaper reports, been recently scrapped.

A type of nuclear fission reactor manufactured off site and then brought to location for assembly. (There are, however, various studies that present concerns about the means to transport SMRs safely).

SMRs do not necessarily need to be connected to the large power grid and can increase power supplies from other modules if needed.

They can be particularly useful in remote areas where there may be a lack of trained workers and potentially higher shipping costs.

SMRs use new fuel approaches allowing for higher fuel utilisation and longer fuel cycles. Longer intervals between refuelling can decrease the risk of proliferation and radiation escape. In remote areas where access can be difficult, longer fuel life can be very positive.

Although all SMRs are subject to regulatory approval, the consortium has plans to deliver as many as 16 mini nuclear power stations elsewhere, including Trawsfynydd in Snowdonia, North Wales, with the first SMR up and running by 2028.

Rolls-Royce said it wants to develop its UK SMR approach “from the ground up based on the needs of energy utility companies and operators”, promising “reliable and affordable, low-carbon electricity”.

Nuclear power currently produces around 20% of the UK’s electricity requirement. It is estimated that each SMR is capable of producing one fifth of the energy the latest generation of large reactors can, such as Hinkley Point C in Somerset by EDF.

“Our world needs more low-carbon power than ever. So, we’re leading a UK consortium to develop an affordable power plant that generates electricity using a small modular reactor – an intelligent way to meet our future energy needs” – Rolls-Royce.

“The global energy sector is facing increasing pressure to produce more power more quickly and in more places with more certainty of availability cost, capacity and flexibility and lower input costs and a smaller environmental impact. Satisfying both has called for a new approach. Our UK SMR concept is the answer,” it added.

Rolls-Royce claims its SMR design will:

“At every point in the development of our UK SMR solution, we have sought to take a modular approach to drive down the cost of electricity to as low as practically possible, whilst at the same time building in multiple layers of fault prevention and protection to make sure the technology is safe in all modes of operation” – Rolls-Royce.