The way manufacturers talk about servitization these days, you’d think it was something new and shiny, but it’s as old as razor blades. Nick Peters reports on the background of offering Products-as-a-Service.

The concept of servitization has moved on radically since Gillette’s original business model, but the essence remains the same: how can a manufacturer improve profitability, market share and long-term revenue streams by turning from a pure product producer into a product-as-a-service provider – from providing outputs to providing outcomes.

It’s a common feature of life – a phenomenon does not get analysed until someone gives it a name.

The term ‘servitization’ first appeared, as far as I can tell, in 1988 in a report for the European Management Journal in an article by Sandra Vandermerwe and Juan Rada, Servitization of business: Adding value by adding services.

The common razor was the original model in the early 20th century, whereby the manufacturer’s profits were all made on replaceable blades, not the razor.

American photocopying companies in the 1950s adopted the model successfully, keeping the machine cost low and making money on the specialised papers required by the wet copying process.

It was the development of xerography – ‘dry writing’ – in 1959 by the Haloid company (soon to change its name to Xerox) that caused a revolution in servitization.

The xerographic machines were very expensive, so Haloid leased them to companies with a per-copy fee on top. It was hugely popular and Xerox dominated the market until anti-trust actions and a new technological revolution in photocopying from Japan swept all before it.

This article first appeared in the March issue of The Manufacturer magazine. To subscribe, please click here.

What Xerox hit upon, and what came to define the impact of servitization of a manufactured product, was that the company moved from providing an output to providing an outcome, in this case document management.

This is now commonplace. For example, in the consumer market, the mobile phone industry is largely outcome-based because most customers, who would balk at the outright retail cost of a phone, will happily pay a service fee that amortises the phone’s value over the length of the contract with a supplementary fee for the use of the network’s voice and data signals.

In manufacturing, servitization was championed by Rolls-Royce plc, way ahead of its time.

Its power-by-the-hour service was introduced close to 60 years ago, offering operators of the De Havilland DH125 business jet (later the Hawker Siddeley HS125) an hours-based service contract on its Viper engines.

The operator didn’t mind paying full fees when the engines performed well, which meant there was a strong incentive on the part of Rolls-Royce to ensure downtime was kept to a minimum.

It is a model that Rolls-Royce uses to this day. Servitization was, however, a niche area until the arrival of digitisation, which changed everything.

There was only a small handful of companies who could offer a service-enhanced manufactured product as Rolls- Royce did, which is why its power-by-the-hour has entered the manufacturing lexicon as the standout example of the model.

Today, the speed with which digital storage and data transmission have come down in price has made servitization possible for a wide array of businesses. But, why bother? If your product is popular with customers, why mess with success?

It is a reasonable argument to make, but as a study conducted by The Manufacturer with Microsoft demonstrates, companies who think they are in the output-only game are quite likely to be offering service as a free sales incentive that ends up eating into profitability.

Better to improve the service offering and wrap it together with the product in a way that provides an improved experience for the customer, while turning employees such as field-service technicians from cost-centres into profit-centres.

Cheap, digital-friendly sensors in the product provide the data that can trigger a service call, while digital twinning and AR (augmented reality) reduce maintenance times, and therefore downtime.

Four traits of a servitization company 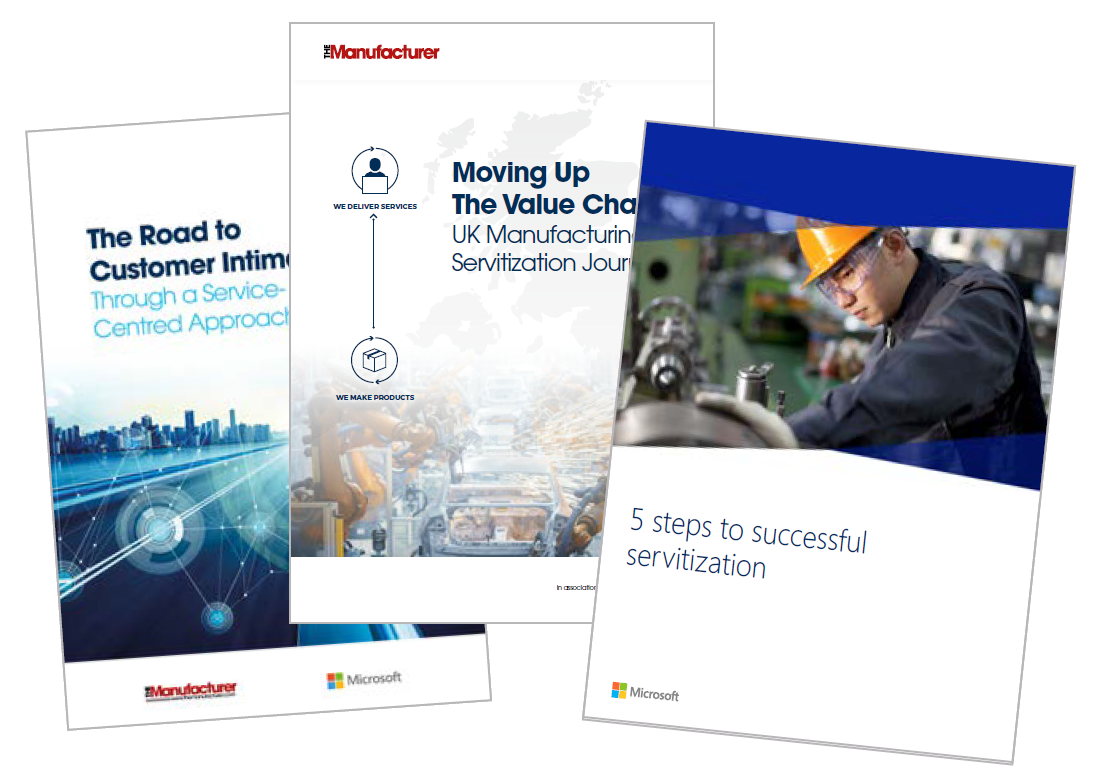 The journey from being a business that moves from output to outcomes requires planning, a keen understanding of customer needs and a firm grasp of how to make technology the enabler.