Seven ways to ‘level up’ regional productivity in UK manufacturing

Long-term policies that support regional productivity levels, extra funding for SMEs, and the bolstering of existing industrial initiatives, are among a raft of recommendations by a cross-party think tank for ensuring the future of Britain’s manufacturing industry.

A seven-point plan highlighting key areas for strengthening manufacturing capabilities in regional parts of the UK has been published by the independent Manufacturing Commission, supported by Policy Connect.

The Level Up Industry report, endorsed by House of Lords Peer, Lord Karan Bilimoria, who is also Chairman of the Commission, calls on government and industry to adopt new and fixed targets for supporting and reinforcing manufacturing capabilities across the country, much in the style of the government’s commitment to become net zero by 2050.

It also encourages authorities to focus the debate around regional manufacturing on “the realities of the role…of the communities and regional economies in which it exists”, and less on “broadly abstract” discussions concerning the industry’s purely economic value to society.

The ERA Foundation, which supports activities that “bridge the gap between research and commercialisation in engineering”, and the Manufacturing Technologies Association (MTA) were critical advising bodies for the report.

The 7 Level Up Industry recommendations

The long-term policy recommendations put forward in the Level Up Industry report come just weeks before the UK government’s Spring Budget, set to be announced on 11 March.

The last Budget was in October 2018 – so it could be argued that this imminent statement is a crucial one for UK manufacturing, particularly with the ever-shifting landscape set in motion by Brexit.

The former Chancellor of the Exchequer, Sajid Javid, who has championed a “levelling up” of British industry, said in his March Budget preamble that the government would usher in a “decade of renewal”, unleashing Britain’s potential, and begin a new chapter for the UK economy.

The Treasury Department also vowed to boost spending on vocational education – a seemingly positive step towards getting the UK’s future workforce properly equipped for the jobs our industry is building in the era of Industry 4.0.

It claimed it will prioritise the environment, while pledging £100bn to fund an “infrastructure revolution” (for example, transport spending) over the next few years that will be “transformative for every part of our country”.

Big government investment projects that are typically biased to where “economic growth and high productivity are concentrated” could also be reviewed, according to the BBC. 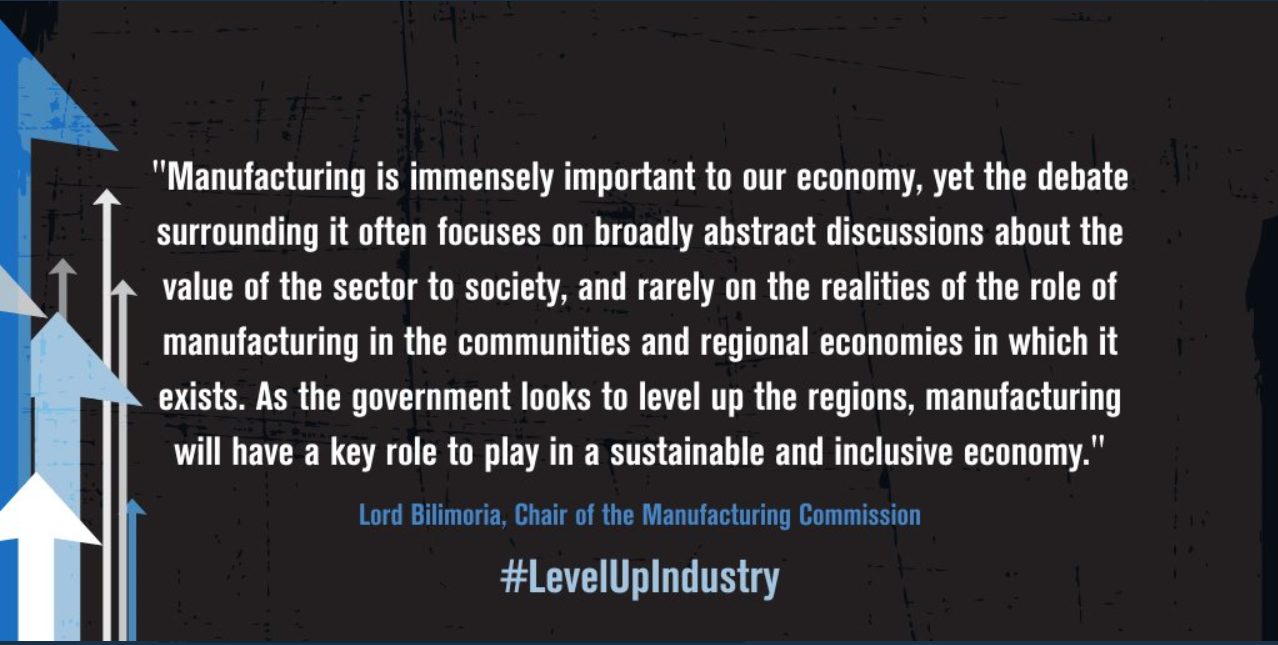 “This report comes at a key time for UK manufacturing. New markets exposed as a function of Brexit, supply chains being shortened by more reshoring, and a new minister responsible for our Industrial Strategy.

“We must however (as this report suggests) not fail to recognise the need for effective mechanisms to convert government policy and funding into meaningful, sustained benefits to our SME manufacturers.

“An analogy made by Lord Bilimoria was that a business with only a CEO and shop workers will never be as effective as one with middle management tasked to convert strategy into output.”