Posted on 4 May 2016 by The Manufacturer

Lower costs, fewer maintenance and upgrading headaches, easier scaling of IT systems to business needs, the ability to compare projected with actual costs in real time, greater agility – what’s not to like about cloud computing?

And yet, while nobody questions that the future lies in the cloud, there are some deep-rooted concerns about moving IT systems to the cloud.

A new survey by the Cloud Security Alliance (CSA), and Skyhigh Networks confirms that perceived security risks remain a major hurdle for a wider adoption of cloud technology.

Businesses are still uncomfortable with company information not being stored on their premises.

High-profile security breaches and the threat of data being subject to ‘snooping’ have further exacerbated this unease over the past few years.

However, this is not the whole story, and certainly not for the UK manufacturing sector.

Manufacturing in the cloud

According to two Exact commissioned independent studies of UK SMEs from 2015, The Exact Small Business Efficiency Index and Exact 2015 SME Cloud Barometer, more than two thirds of UK manufacturers – the vast majority of which were businesses with less than 50 employees – believed that technology is key to addressing the sector’s challenges.

These ranged from providing accurate cost estimates through delivering projects on time to getting paid. 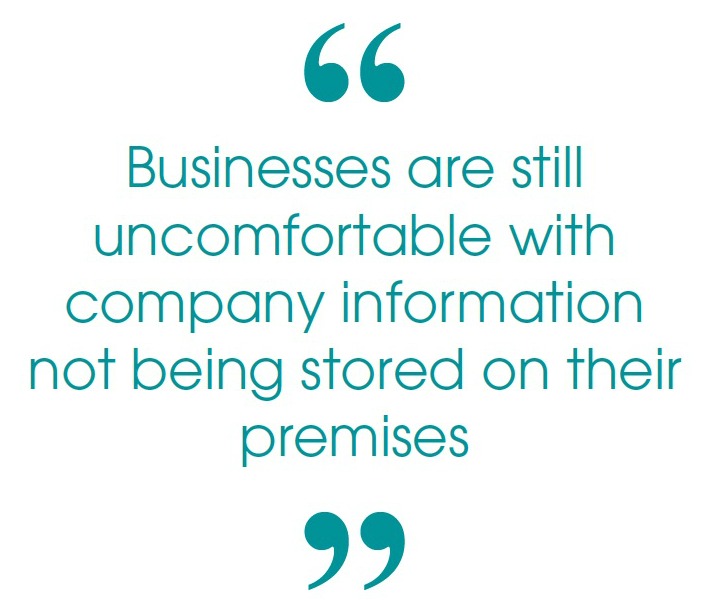 Nearly a third of manufacturing businesses had already moved to cloud software to manage their financial, business and planning processes – more so than peers in other sectors.

This is not surprising given that ‘heavy users’ of cloud software – defined as those SMEs across various sectors with three or more online systems – achieved far higher revenue growth and more than double the profit of those using fewer cloud products.

Those that have made the switch also said it increased productivity and made it easy to collaborate with third parties, such as supply chain or outsourcing partners.

What is surprising, however, is that nearly a third of manufacturers stated that, rather than being a turn-off, security was one of the drivers for them to adopt online solutions – second only to IT cost considerations.

More striking still, 80% of respondents among SME manufacturers reported that, since moving to the much-berated cloud, they had either seen no change in the number of security incidents or that their number had actually decreased.

Based on the results of the research, it appears that security may be a far lesser concern among SMEs than it is for larger enterprises, as the CSA research implies.

One major reason for this may be that – rather than water down IT security – a move to the cloud may increase how secure SME data is kept.

At first glance, having your file, email and application servers close at hand at your own offices, may instil a sense of security. However, the opposite could be the case.

A small manufacturer would be hard-pressed to put in place the dedicated financial and personnel resources needed to maintain an intricate web of IT security measures.

In comparison, a cloud specialist, such as a SaaS (Software as a Service) provider can offer SMEs much more stringent data security, back-up processes and access control – without the ‘strings’ attached to on-premises security.

So, rather than a cause of fear, the cloud can be a boon for SME manufacturers in terms of both security and business growth.

Jumping in at the (not so) deep end

While security is an important consideration, the decision to jump – or not to jump – into the cloud ultimately should be driven by a business’s growth ambitions.

Exact’s research suggests that manufacturers have to bite the bullet and jump if they want to stay competitive and grow.

This is because Cloud technology can help address some fundamental issues that they are struggling with.

For instance, a potential £24.7bn in extra revenue is currently being jeopardised because manufacturers cannot respond to requests for proposal in time.

Inaccurate cost estimates threaten margins, and not getting invoices paid puts their cash flow on the line; because skilled staff is hard to come by, a significant number of projects are delivered late.

A common denominator in all of the above is limited visibility of operational and financial data to base decisions on.

The sector’s documented overreliance on spreadsheets and other manual processes renders data analysis cumbersome. For example, the information needed to compile realistic cost estimates or production schedules is often spread across different formats and locations.

Gaining access to better insights into all operational functions is therefore critical for SME manufacturers. Company data must be visible in real time, providing a single view of the business. Only then can firms manage costs more proactively and identify bottlenecks that may affect delivery schedules before they can cause havoc.

By giving SME manufacturers this ‘dashboard perspective’ on their business, cloud technology could become an important ally in helping them meet the challenge of taking their operations real time and becoming more responsive and astute in the process.

Made Smarter urges manufacturers to turn pain into empowerment