The ‘green manufacturing’ supply chain has been notable for its lack of British presence. There have been efforts to change this and its value should be sufficient encouragement to get involved, Ruari McCallion reports.

The consensus at the 2013 meeting of the World Economic Forum at Davos, Switzerland, is that, in terms of energy consumption, there will be the equivalent of two new ‘Europes’ by 2025.

The market in the connected area of ‘green’ technology was, at that time, estimated at about €2tn and it is expected to more than double, to €4tn – more than the combined GDP of Germany and Turkey.

Clearly, this size of market represents a massive business opportunity. Just in the UK, the renewables sector includes wind power, solar and tidal, with plans advancing for a tidal barrage in Swansea Bay and undersea turbines by Scotland’s Island of Islay.

While the Government has announced that onshore wind farms have effectively reached the end of the road, the offshore segment remains very firmly in place.

Some of the largest developments in the world will be in the waters around the UK, which already has as much capacity as the rest of the world combined.

So it’s a bit surprising that British companies were not heavily involved in the supply chain from outset. 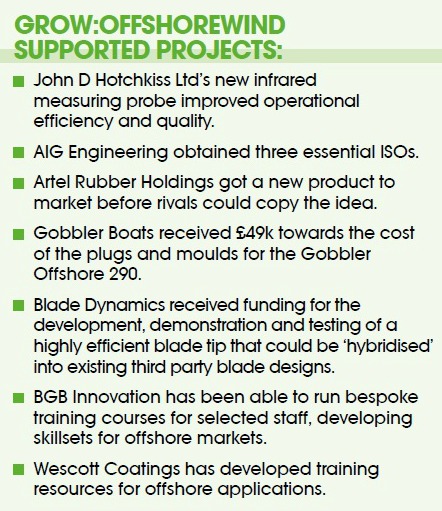 “In 2013, offshore wind power projects had less than 10% UK content,” said Dominic Brown, head of GROW:OffshoreWind, which was set up by the UK government and is delivered by RenewableUK, Grant Thornton and the Advanced Manufacturing Research Centre, and whose partners include Alstom; Siemens; Areva, and DB Wind.

He says that the supply chain is in much better shape and that GROW is working with Tier One suppliers in order to help the supply chain’s understanding of their requirements.

“Content has now increased greatly,” he maintains. “Statoil Dudgeon was talking of UK content of up to 50% at the last renewables conference.”

While the review of support for renewables is not yet complete, commitments to 10GW of offshore wind capacity remain.

The national offshore wind programme consists of more than 40 projects with an estimated investment value of £80bn – £100bn.

It may not sound much but £20,000 would enable the employment of an external consultant to help a company understand requirements and, for example, achieve the right ISO certification so that it will be identified as a suitable supplier in online bidding portals, for example.

“We have supported more than 350 businesses with grant funding since we were established.”

Funding is in place to the end of 2015 but has not been confirmed thereafter. Time to get that application in if you want to ensure a share.