Malcolm Wheatley reports on the automotive industry’s stunning achievements over the past 40 years, but says very significant risks lie down the road.

In 2001, The Economist remembered Ford’s Halewood plant on Merseyside in the 1970s as ‘the worst car factory in the world’. “The Ford Escorts it churned out were dodgy, its workers were bolshie, and the place was a battleground of class warfare,” was how it summed up the plant. 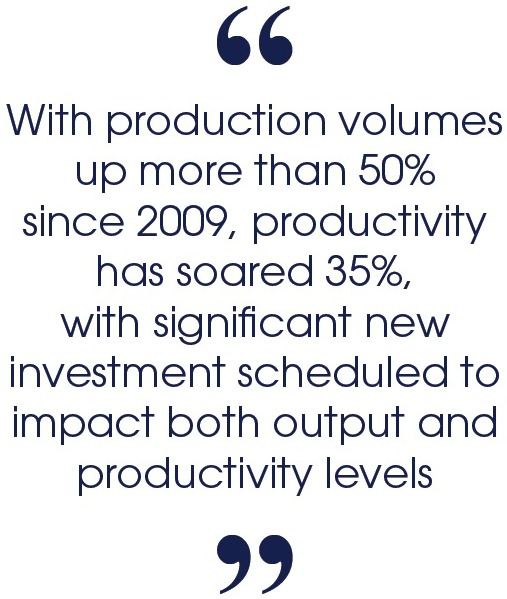 It’s a transformation reflected throughout the UK’s entire automotive sector. Gone are the days of strike-bound plants, inefficiently churning out moribund models for a largely domestic market. These days, the sector is efficient and vibrant, and a major export success story.

Figures released by industry body the Society of Motor Manufacturers and Traders (SMMT), for instance, showed that the UK built 118,000 vehicles during July, on course for annual 2016 production of more than 1.7 million units.

Underpinned by volume producers such as Toyota, Nissan, Honda and GM, and supplemented by niche marques such as Aston Martin, Bentley, Jaguar, Rolls-Royce, and Land Rover, the Office for National Statistics calculates that Britain’s automotive industry is the country’s third-largest employer, with more than 160,000 people directly involved in production and a further 78,000 in the supply chain.

Collectively, one vehicle is produced every 20 seconds, 80% of which are exported. Don’t forget, too, the country’s nine bus and coach manufacturers, and Leyland Trucks, the UK’s largest medium and heavy duty truck manufacturer.

With production volumes up more than 50% since 2009, productivity has soared 35%, with significant new investment scheduled to impact both output and productivity levels.

Sunderland’s Nissan plant, for instance — already the UK’s single biggest vehicle assembly site, producing one in three UK built cars — announced a £100m investment last year, to equip it for the production of the new generation Nissan Juke, which will be built alongside the firm’s Qashqai, Note, and LEAF models.

Compare the UK’s automotive sector with its peers in North America and Europe, and one thing quickly stands out, said Will Shepherd, a partner heading the manufacturing practice at LCP Consulting, and a former operations executive at FIAT.

“The UK automotive industry is very good at ‘high variety, low volume’ manufacturing, which is a difficult trick to pull off profitably,” he observed. “Achieving it calls for real discipline in areas such as kitting and sequencing—look at Jaguar Land Rover, for instance, and you’ll see that it is extremely advanced at this.”

Tier 1 manufacturers, too, are getting in on the act. Coventry-based Brose UK, which produces window regulators and seat structures for carmakers such as Nissan, Toyota, and Jaguar Land Rover, has doubled its manufacturing footprint in recent years, seeing sales rise to £195m over the past twelve months.

And in addition, said Brose UK managing director Juergen Zahl, the business has been investing in its UK-based technical and design capabilities.

“Our UK operations are increasingly important to the broader Brose group,” he noted. “If you look at our welding experts, you’ll see no difference between here and Germany, and locating design capabilities here as well will give us improved speed and flexibility when making design changes.”

Similarly, the industry is getting better at harnessing technical expertise to drive innovation and improve manufacturing efficiencies, said Carl Perrin, director of the Institute for Advanced Manufacturing and Engineering, a collaboration between automotive manufacturer, Unipart and Coventry University.

“It’s about having manufacturing engineers and designers who are flexible and agile, and who get the big picture,” he pointed out. “It’s not about taking a narrow functional perspective, but about being better at working faster and smarter.”

As an example, he highlighted the recent development of a lightweight exhaust for Aston Martin, in partnership with MetLase, Unipart’s powertrain application business. This involved first designing and testing a lighter prototype exhaust system, and then developing an efficient and cost-competitive production process to overcome the challenges of manufacturing lightweight technology.

The result: a lightweight exhaust that offered a 50% weight saving, yet still delivered the same acoustic and driving performance as its heavier counterparts.

Nor is such innovation necessarily confined to established players within the industry, or established technologies. Llandrindod Wells-based Riversimple, for instance, is developing a hydrogen-based fuel cell for automotive powertrain applications, and has been driving a road-legal prototype, the Riversimple Rasa, since January. Powered by an 8.5 kW fuel cell delivering the equivalent of 250 mpg, it weighs just 580kg and has a 300-mile range.

Autonomous vehicles are another rapidly evolving area of automotive innovation, and Tier 1 and Tier 2 automotive supplier RDM Group is behind the autonomous ‘pods’ recently trialled in Milton Keynes.

Responding to a tender from Innovate UK and the Transport Systems Catapult, to design an autonomous vehicle from the ground up, brought the company into contact with consortium partner Oxford University, and resulted in a successful trial of autonomous pod technology, explains Miles Garner, director of sales and marketing for RDM.

Now, he adds, RDM has developed its own autonomous control system and driverless vehicle in the form of ‘Pod Zero’, with talks already underway with governments, universities, and theme parks about providing a ‘first mile, last mile’ transport solution.

That said, the technology innovation most likely to shape the automotive in the near to medium is electric vehicles. A number are already on the roads – Nissan’s LEAF, for instance – and worldwide, the number of electric vehicles on the road is expected to grow sharply over the next 20 years. One estimate reckons that global sales of electric vehicles will hit 41 million by 2040, representing 35% of new light vehicle sales.

“It’s a complete change in the way cars are powered, and at present rates of improvement in battery energy density we’re just a few years away from 200 mile range vehicles costing less than £20,000 – the tipping point at which an electric vehicle becomes a mass market proposition.”

“The car industry goes through these watershed moments every few years, and electric vehicles will be a similar phenomenon: there will be a massive change in the industry’s supply chains, and in its supplier base,” he noted. “Some will adapt, but others will go to the wall.”

“Longer term, aftermarket manufacture tends to be a declining market, as vehicles are better designed, better built, and tend to last longer – so from a growth perspective, there’s an obvious challenge,” he pointed out. “But electric vehicles would hit us harder, and we are already starting to think about our strategy.”

Likewise, GKN Driveline, which is the world’s largest manufacturer of drivetrain systems for cars. Although electric vehicles threaten to disrupt the industry’s status quo, GKN sees more opportunities than threats, according to the business’s chief executive Phil Swash.

For more than 15 years, he noted, GKN has been investing in the development of compact transmissions which turn an electric motor’s high output speeds into instant torque, and transmit it to the axle.

That long term investment is now starting to pay off, with high profile programmes for BMW, Porsche, Volvo and Mitsubishi taking production to the 300,000 unit milestone.

“Compared to the huge volumes that we manufacture for conventional vehicles, electric drives are still a small part of our operations,” said Swash. “We have never seen electric vehicle technologies as a niche business, however, and with up to 40% of new vehicles set to be electrified within the next few years, the market opportunities are strong.”

The threat posed by electric vehicles, however, pales into insignificance compared to two more pressing challenges that the automotive sector must address.

The first is raising the level of domestically-sourced content in UK-built vehicles – a challenge that the government has spent several years addressing through the Automotive Investment Organisation, a body within the department of UK Trade & Investment, and one which works closely with the Automotive Council.

Raising this level of local content, say insiders, would do much to address the UK’s annual trade deficit in vehicle production, currently estimated by the UK’s Office for National Statistics at £5.5bn.

The strategy: persuade large multinational Tier 1 suppliers to locate in the UK, and simultaneously re-shore some of the £3bn or so of foreign-sourced content identified by the Automotive Council as being capable of being manufactured in the UK.

At Birmingham-based Tier 1 and 2 manufacturer of plastic injection-moulded interior and lighting products, Barkley Plastics – where around 70% of output goes to the automotive sector, business development manager Matt Harwood can already point to a number of products re-shored from Europe, including a switch pack for the BMW Mini.

“The contracts tend to be a ‘slow burn’ at the beginning, as the development times are long, but once we’re awarded the work, automotive manufacturing can be more stable than supplying other industries, as the volumes are more predictable,” he said.

The second challenge, of course, is Brexit – not to mention the fall in the value of sterling since the referendum. And the automotive industry’s views are quite clear, said the SMMT’s chief executive, Mike Hawes.

“The government must now maintain economic stability, and secure a deal with the European Union which safeguards UK automotive interests. This includes securing tariff free access to European and other global markets, ensuring we can recruit talent from the European Union and the rest of the world, and making the UK the most competitive place in Europe for automotive investment.”

And should the government’s concentration waver, headline-making pronouncements by the respective heads of Jaguar Land Rover and Nissan have called into question continued investment in UK operations if Britain exits the Single Market.

Back at BM Catalysts, though, managing director Toby Massey is less certain. More than 50% of the company’s output is exported, and a high proportion of raw material inputs are imported. A slumping pound won’t help UK sales, he pointed out, and two-way tariff walls would be bad news for exports.

And as regards the push to attract major Tier 1 automotive manufacturers to the UK, the uncertainty around Brexit has put a stop to a number of well-advanced dialogues, said automotive insider Gane of Vendigital, who has been close to some of the discussions.

“It’s all up in the air again,” he reported. “Not much will happen until there’s more clarity on exactly what Brexit looks like for the industry.”

Given that the industry exports 80% of its output, those sentiments are likely to be widely shared.