UK car manufacturing had a stable March with overall production volumes up 1.9%.

According to new SMMT calculations, the UK car manufacturing industry is more productive than ever before. Year-to-date output is steady, but the outlook is positive with new models starting production. 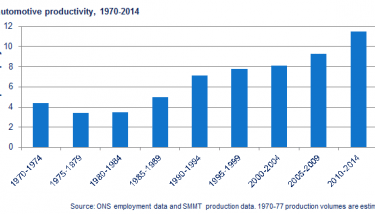 The figures come as new analysis by SMMT reveals productivity in UK automotive manufacturing is at an all-time high. Looking at the past five year period, 11.5 vehicles were produced a year for each person employed in the industry.

Comparatively, for the period from 2005 to 2009, the figure was 9.3 vehicles produced per employee per year.

Mike Hawes, SMMT chief executive, said, “‘Built in Britain’ is more than just a brand: our automotive industry is increasingly competitive on a global scale. The latest production figures are yet more evidence of that, and with £1bn worth of fresh manufacturing investments announced by three UK manufacturers in March alone, the future is optimistic.

“Productivity figures prove that the UK is not only making a diverse range of vehicles which are in high demand around the world, but that manufacturers, supported by a flexible workforce, are producing them more efficiently than ever.”

Chris Sumner, MD of FANUC UK , commented: “Today’s positive SMMT statistics show an increase in UK automotive manufacturing output for March, building on the growth we saw in February. This is a result of the technological investment car manufacturers have made within the supply chain, and we’re continuing to see this reflected in the quantity of outputs.

The appetite within the automotive industry for new technologies is still apparent as we’re seeing a strong interest for collaborative robots; the ability for human operators to work hand-in-hand with automated machines, which will further transform production efficiencies over the next year.”