The performance of the UK manufacturing sector remained subdued in August, as the continued strength of the consumer goods sector was again offset by lacklustre output growth and the ongoing downturn in the capital goods industry, according to the latest Markit/CIPS Purchasing Manager’s Index.

The Purchasing Manager’s Index (PMI) dipped slightly to 51.5 in August – from 51.9 in July and well below the average for the current near two-and-a-half year sequence of expansion (54.2). 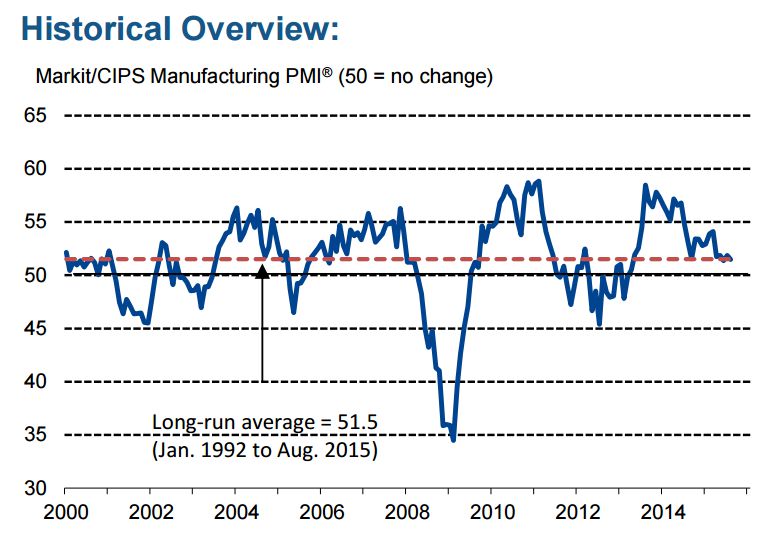 The data reveals that August saw a modest increase in manufacturing production, as companies scaled up output in response to rising levels of new business. Rates of expansion accelerated to five-month highs, but remained below averages for the current upturn.

The domestic market remained the main pillar of new order growth, as the level of new export business decreased for the fifth straight month. Companies linked reduced overseas demand to the sterling exchange rate, weak sales performance to the eurozone and the slowdown in China.

On the costs front, there was a substantial drop in purchase prices during August. Average costs declined at one of the steepest rates during the past 16 years, with marked reductions reported across the consumer, intermediate and investment goods sectors.

This reflected a combination of lower oil prices, the sterling exchange rate and reductions in the costs of a wide range of raw materials.

The trend in employment turned mildly negative during August, with a negligible reduction in staff headcounts reported following a 25-month sequence of job creation. Cuts were mainly centred on large-sized manufacturers, as SMEs continued to add (on average) to their payroll numbers. 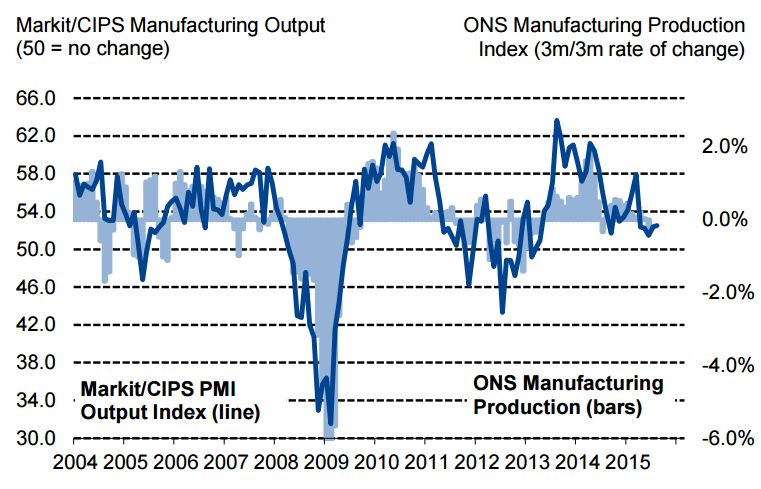 Manufacturers reported a preference for reduced inventory holdings in August, as stocks of purchases and finished goods were both depleted. The former was the result of lower levels of purchasing activity.

Senior Economist at survey compilers Markit, Rob Dobson described the UK manufacturing sector as being in a “holding pattern”, with production growth “hovering around the stagnation mark and marginal job losses reported for the first time in 26 months.”

He predicted: “On this basis, the sector looks unlikely to make much of a contribution to the solid gain in broader GDP growth expected for the third quarter.

Group CEO at the Chartered Institute of Procurement & Supply, David Noble commented: “The sector was on a go slow trajectory this month, showing a disappointingly slow pace of growth, and barely moving from last month’s figure, raising fears this could be an entrenched situation developing in the next few months.

“Though there was still a modicum of production activity as output growth rose to a five-month high in response to new orders and in a marketplace mostly reliant on the domestic market as exports fell for the fifth month.”

“The biggest news is the drop in the input price index which signalled one of the sharpest rates of decline for1 6 years which was attributed to the continued drop in oil prices and for an increased number of raw materials.

“Lastly, with turmoil in the Chinese markets and disruptions to supply chains as a result of chemical explosions in the region, the resonating effects globally may ripple through the sector in the coming months, even though China has little direct impact on the UK marketplace.”

Head of Manufacturing, SME at Lloyds Bank Commercial Banking, David Atkinson said: “Growth in manufacturing remains subdued and the latest PMI statistics offer a clear indication that global economic uncertainty, compounded by tremors in China and emerging markets, and the strong Sterling, is starting to have a tangible impact.

“Despite the weakening trading conditions, we see healthy appetite for investment from within the sector, particularly for research and development activity and in exploring new markets.”

“Slowing growth in China and reported lower manufacturing output is a real concern for the industry. A reduction in demand from China for imported goods would affect both direct UK imports and those of the broader global manufacturing base that UK manufacturers supply.

“The supply chains of many UK manufacturers depend upon Chinese manufacturers and will be impacted to varying degrees. As a result, firms may see rising costs and supply difficulties.

“Greater stability in the EU has not yet brought with it a strengthened euro, and this also continues to hold back UK export growth.

“These factors may mean that the remainder of 2015 is likely to be challenging for the sector.”

“However, we are seeing UK manufacturers remaining optimistic about long-term prospects, with many investing in talent initiatives and innovative use of technologies to drive growth and increase performance.”