Posted on 1 Apr 2015 by Victoria Fitzgerald

UK manufacturing maintained ongoing expansion, an increase in orders and a rise in workforce in March according to Markit/CIPS figures released today.

The data, recorded for second half of March, also revealed that price pressures remained on the downside, and input and output charges both fell.

The seasonally adjusted PMI climbed to its highest in eight months at 54.4. The PMI has now remained above the neutral 50 mark for a consecutive 24 months.

The average reading for the opening quarter as a whole (53.8) was the best growth outcome since the second quarter of last year.

Production expanded in the sector at its fastest rate in nine months, bolstered by the steepest gain in incoming new business since July last year.

The sturdy domestic market remained the number one source of new contract wins.

There was a modest increase in export demand following a slight dip in February and firms reported improved order flows from a broad range of nations, including USA, China, Germany, the Netherlands, Canada and the Middle East.

The consumer goods sector continued to lead the upturn in the broader manufacturing sector, recording by far the steepest growth rates for both output and new business of the three main industrial groups covered by the survey. Consumer goods production rose at the fastest pace since last April.

Although the outright rates of output expansion in both were moderate compared to the consumer goods sector, they were nonetheless solid and improvements on those signaled during February.

Manufacturing employment increased for the twenty-third consecutive month in March, with further job creation recorded at both SMEs and large-scale producers.

Along with the increases in new orders and output, companies also linked higher workforce numbers to the clearing of backlogs. Outstanding business fell for the thirteenth straight month.

March saw a further substantial decline in average purchase prices, with the rate of deflation edging closer to January’s near six-year record. Lower purchasing costs were linked to exchange rate factors and the drop in oil prices earlier in the year. Subsequently, output charges were also lowered.

Currency fluctuations has led to a renewed demand for exports, driving an increase in output at the end of March. As oil prices have continued to stay low, manufacturers are taking advantage of the savings made, and are turning them into new technological investments. Robotics and automation are continuing to improve efficiencies in the production process, supporting the increase in orders particularly within the plastics sector.”

Mike Rigby, Head of Manufacturing at Barclays: “With limited growth in our main export market, the Eurozone, we must be thankful, that for the time being the domestic market remains the main driver of growth for the UK economy.

“With zero inflation and the impact of the slump in the oil price still having effect, the UK Consumer should continue to provide a steady platform upon which UK manufacturers can perform.” 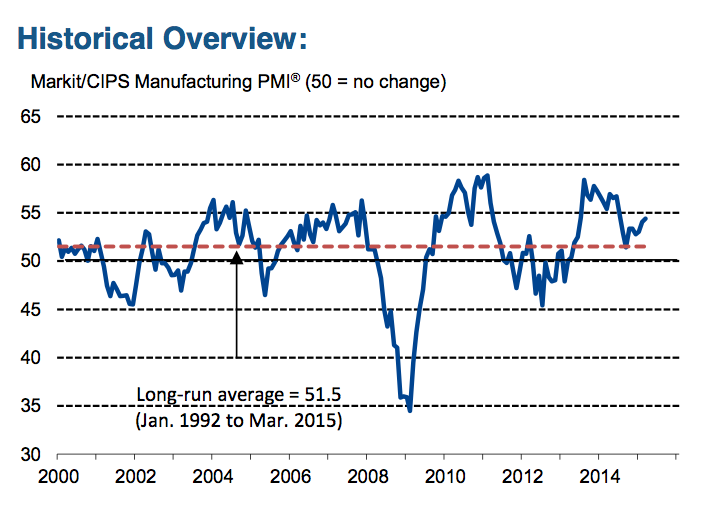