UK R&D: to knowing how

The UK has been promoted as somewhere with a lot of know-how and intellectual property resources, even if we aren’t always the best at commercialising it – but is that really the case? Ruari McCallion explores the R&D landscape, including government efforts to stimulate more research-intensive activity.

During an event to mark the official opening of its new Product Solutions Lab (PSL) at Sutton in Ashfield, Nottinghamshire, R&D/Leverage UK’s managing director Alan Tolley observed that the company’s customers – drinks and food brand owners and plastic convertors – require much more from their tooling suppliers than simple supply.

R&D/Leverage began life as a toolmaker, simply supplying machine tools for bottling, packaging and plastic conversion, to specifications provided by its customers.

The firm has, over the past five years especially, moved up the value chain and is now to be found working alongside customers like L’Oreal when thinking about new or upgraded packaging – at the concept stage.

The company originally established a PSL facility in 2012, with the goal of providing a secure research and development working environment to confirm the feasibility for bottle/jar shape, market evaluations, and to provide short-run production for line, filling, labeling and capping trials, and tooling qualification and process validation.

It now provides a total solution from pre-sales evaluations through product design, prototyping & tooling design to manufacture and process validation, prior to shipping the production tooling to the customer.

R&D/Leverage has moved up to be more R&D-oriented and to collaborate more closely with customers in developing improved packaging and processes. 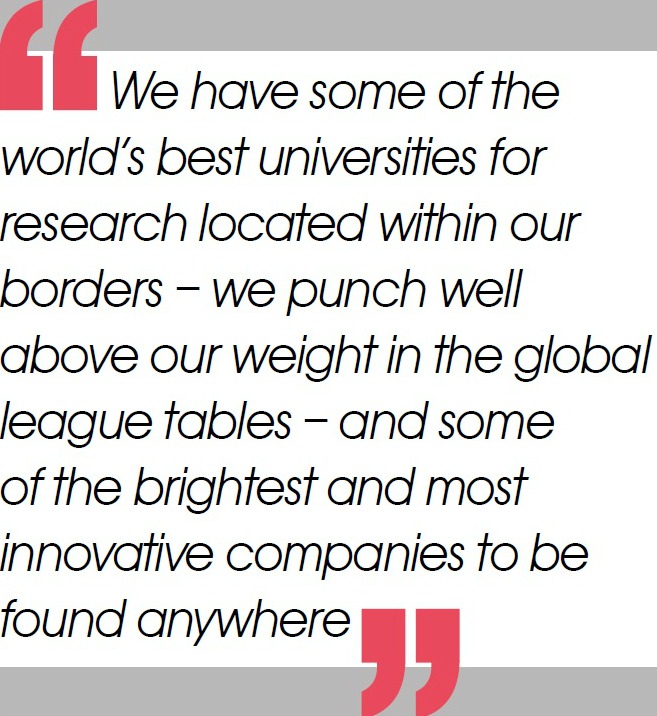 It may not be engaged in what some would see as cutting-edge research, but it is developing processes and products that lead to the award of patents, and which help to make a more profitable enterprise.

It has recognised the advantages; other companies might have overlooked the value of what they are doing.

As Leyton UK’s William Garvey says, engineers often don’t realise that what they are doing is ground-breaking.

Normal processes that are gone through and undertaken during the course of routine product development could well be novel, innovative and of significant value.

The government’s current definition of research & development is much wider than the area covered by white coats and experimental studies; benchmarking, product evolution and development are R&D and they could well qualify for incentives and financial rewards.

It is not as if British companies can afford to overlook such encouragement.

We have some of the world’s best universities for research located within our borders – we punch well above our weight in the global league tables – and some of the brightest and most innovative companies to be found anywhere.

Look at the world of Formula 1; the majority of teams are based in the UK; in fact, the only truly successful one that is not UK-based is Ferrari.

Dearman has announced that full testing of its cutting-edge zero-emission engine technology has begun at the Dearman Technology Centre, its new liquid air R&D facility, which is located near Croydon.

It houses a range of custom-built test cells, in which Dearman’s technologies will undergo extended durability testing and new applications will be developed.

When fully operational it will enable the testing of four engines simultaneously, along with full system testing, supported by low-volume manufacturing and build capabilities.

The company’s zero-emission transport refrigeration system is currently in extended on-vehicle testing at MIRA Technology Park, and will be commencing commercial on-road trials later this year.

But we don’t seem to be very good at capitalising on our innovation.

The EEF/Vodafone 2015 Innovation Monitor reported that the UK’s business expenditure on R&D is just 1.1% of GDP.

While this may, in part, reflect the mix of the UK’s economy – our financial and services sector forms a larger part of our GDP than most of our competitors’ – it supports findings from other sources, including the Neuenhofer Institute in Germany.

Take the money and run

It’s not as if support and opportunities are either not available or are ruinously complicated.

Patent law exists to protect IP and is well known. Design Rights are a cheaper form of IP protection that SMEs may find easier to afford.

The government has introduced a series of incentives to encourage an increase in R&D activity in the UK, including the Patent Box, R&D Tax Credits, which are generous and particularly targeted at SMEs, and RDEC (Research and Development Expenditure Credit), which is a similar scheme for larger companies.

“Between 1981 and 1999, UK R&D expenditure fell as a proportion of GDP. R&D tax credits/incentives (tax benefits on expenditure) were introduced in 2000 and extended to large companies in 2002,” said Bernhard Gilbey, global head of the Tax Strategy & Benefits team at Squire Patton Boggs (UK) LLP in London.

HMRC statistics say that more than £11.4bn in tax relief has been claimed since R&D tax credits were first introduced.

This suggests that R&D activity is now growing, reversing the trend of recent years, although Gilbey says that it is difficult to evidence the exact relationship between the tax incentive and the decision by taxpayers to carry out the R&D activity here.

Companies do not have to rely entirely on their own resources. The Warwick Manufacturing Group has been around for a while and worked on so many developments and innovations that its income from them is now counted in hundreds of millions of GB-Pounds.

The Institute for Advanced Manufacturing, a joint venture between Unipart and Coventry University, describes itself as the UK’s first “Faculty on the Factory Floor”.

It brings together engineering students, faculty and companies to work together to solve problems and to develop innovative solutions.

It has more than £3m leading-edge robotic welding, metrology and automation equipment and is also intending to offer Continuing Professional Development facilities. 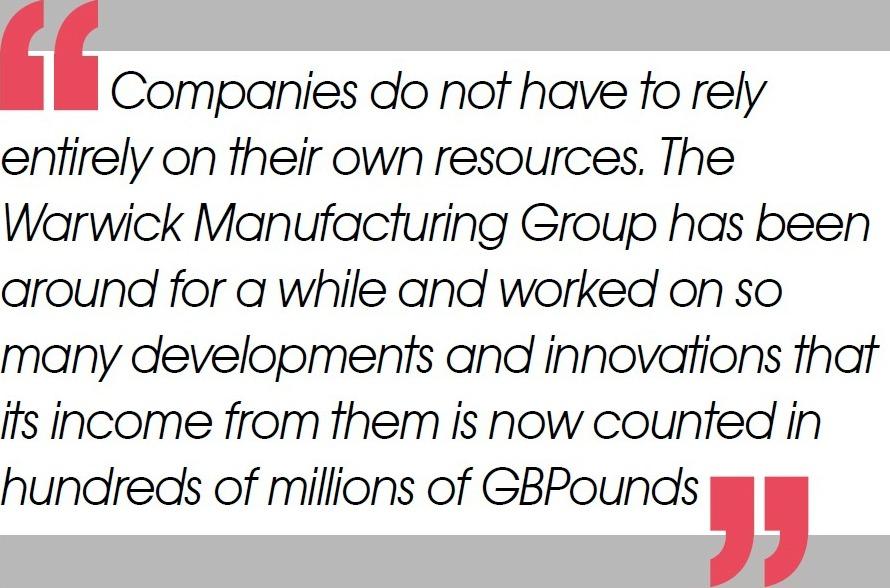 There can hardly now be a significant university without a science or technology park – or even both.

The atmosphere and environment for R&D in the UK is changing so much that it has even tempted Pfizer to invest here again. The test now is to turn the incentives into added value.

While funding for innovation support is viewed as critical and something that must be maintained, uncertainty around outcomes leads to increased concerns about falling behind competitors.

Manufacturers are very ambitious about innovation, investing in it heavily and using specialist resources; but they also have to pull in staff, equipment and finance from elsewhere in the business.

However, they are not always achieving the results they need. Innovation is challenging and a lack of resources reduces the chances of success.

For the second year running manufacturers have reported increased concern about falling behind competitors on innovation.

The UK’s expenditure on research and innovation is lagging behind that of our key competitors. Latest data shows UK Business Expenditure on R&D (BERD) is only 1.1% of GDP; the OECD average is 1.6% and Germany is at 2.02%.

A new injection moulding machine cost £750,000, £1.5m went into accompanying tools and £500,000 was committed to the automation of production processes to allow existing staff to manufacture a greater amount of product with increased efficiency.

“3D printing technology can turn an idea into reality in less than 72 hours. Autodesk Inventor allows our engineers to draw a new concept as a detailed 3D CAD model in just minutes and this digitised design is then produced as an intricate prototype by the printing machine,” said Martin Hurworth, operations and technical director. “The prototype can then be tested and evaluated within the day.”

The company uses Selective Laser Sintering (SLS) to develop the pressurised and watertight features of its water softeners.

Harvey Water Softeners received tax credits for its R&D investment and was able to reduce its corporation tax as a result of the patented status of the products it is developing.

What does the strength of the pound really mean for manufacturing?