Posted on 4 Apr 2019 by Jonny Williamson

Vertical Farming is a new approach that could help solve the world’s escalating food chain crisis. And it is all made possible by data and lean manufacturing.

Though vertical farming is not a new concept – the theory that food can be grown in large quantities inside tall buildings has been around for decades, it is only recently that it has become possible at a price point that matches that of produce grown using traditional methods, and that is thanks to the same digital manufacturing technologies that are revolutionising our factories.

AeroFarms of Newark, New Jersey, is a pioneer of aeroponic farming with an ambition to set up vertical farms in towns and cities across the world to meet the growing ecological and human crises of the next few decades.

(Unlike hydroponics, where plant roots sit in a small container of water, aeroponics involves ‘misting’ roots with water and nutrients.)

Founded in 2004, and the recipient of substantial financial investment from major Ag investors like ADM Capital, to global celebrity chef David Chang, and the Swedish furniture giant IKEA, AeroFarms is the very model of a solution rising to a global challenge using imagination, ingenuity and technology.

As the company’s founding date suggests, it takes time, coupled with intensive, micro-level R&D to reach that critical point where costs are brought down, allowing prices to compete with traditionally farmed produce.

AeroFarms co-founder David Rosenberg says they are there, producing their own-label pre-packed ‘Dream Greens’. But it was not always easy.

“We didn’t always understand why plants sometimes grew, sometimes didn’t grow,” he told me. “We started tracking data, at first for data’s sake, seeing if we could understand what’s going on in this puzzle called plant biology.

This article first appeared in the March issue of The Manufacturer magazine. To subscribe, please click here

The technology world today is also very different from 2004. We have witnessed an exponential rise in the capability of digital systems to gather data through sensors (IoT) and process and analyse it, and an exponential fall in the transmission and storage costs that that data analysis requires.

As the technology matured, so Rosenberg and his team began to acquire the tools they needed to refine how their vertical farm works.

“Having access to the information at our fingertips, having it separated into its different components to be interpreted is key,” he said. “We have used imaging systems, including multispectral cameras to capture our plants in our farm. We have sensors that are connected wirelessly through systems like the Dell Gateways, to connect to our different people.

“We have plant scientists, physiologists, plant pathologists, and molecular biologists that are trying to understand what’s going on. We have people in operations using Lean manufacturing. So, the interconnectedness of the farm is all coming together. It wouldn’t be possible without a complete harmony of these systems, hardware and software, that are connecting all the data.”

It is the application of manufacturing principles like Lean, in a way that could never happen in traditional agriculture, that stood out for Nigel Moulton, Global CTO for Dell EMC, whose systems make the AeroFarms ambitions possible.

“If you take the Six Sigma principle, and you applied it to agriculture, you end up with AeroFarms,” he told me. “It is the combination of a lean process married to a set of technologies that help you deliver Six Sigma, in this case, in agriculture.

“There is the added benefit that it’s in a brownfield location that might have very low yield and use if it weren’t for somebody as innovative as AeroFarms coming in and saying, ‘We can occupy this space, we can apply Six Sigma. We can apply technology to actually grow something.’”

70% of the world’s water goes to agriculture

70% of freshwater contamination is caused by agriculture

Nigel Moulton’s point about the sites AeroFarms uses is well made. Their global HQ is their ninth farm, and is in a converted steel mill in Newark, New Jersey. It’s R&D centre, also in Newark, is a former nightclub. Another farm in Newark is a former paintball and laser tag arena. This is entirely consistent with their philosophy of using as few new resources as possible and recycling as much as they can.

AeroFarms is a member of the Ellen McArthur Foundation’s Circular Economy 100, an elite grouping of companies whose goal is to minimise waste and live by the principles of the circular economy.

Inevitably, it was their ability to micromanage waste out of the system that also contributed to reaching that crucial price point. As a small example, if a plant only needs a part of the light spectrum to grow, why not find a way to deliver just the bit it needs?

AeroFarms is also a certified B Corporation, which means they meet “the highest standards of verified social and environmental performance, public transparency, and legal accountability to balance profit and purpose.”

Their contribution to social and environmental good is augmented by programmes such as placing a growing unit inside inner city schools to enable children to see the technology at work – and give them fresh food to eat.

Up to 95% less water used and no pesticides

Up to 50% less time to grow plants

Millions of data points each harvest

One million kilos of leafy greens per farm annually by AeroFarms

The future is vertical

AeroFarms’ commitment to the philosophy and principles of the B Corporation is apparent in more than just the way its values and management are entirely bent towards solving global issues such as population growth, hunger and water contamination. It is also obvious in the way that this is not just another high-tech company seeking to corner a lucrative market for itself.

“AeroFarms are the world leaders in this space,” David Rosenberg told me. “But it’s

not a space where there’s one winner and lots of losers. There’s going to be several winners in this space. It is not unlike other industries: there’s a rush of people getting in, excited and inspired by what AeroFarms is doing. And hopefully that competition is good, ups the game, and makes us innovate faster and get to our goals faster.”

To put it another way, onwards and upwards.

How does AeroFarm’s do it?

Mist the roots of the greens with nutrients, water, and oxygen. The aeroponic system is a closed-loop system, using up to 95% less water than field farming and 40% less than hydroponics.

LED lights create a specific light recipe for each plant, giving the greens exactly the spectrum, intensity and frequency they need for photosynthesis in the most energy-efficient way possible. This allows control of size, shape, texture, colour, flavour and nutrition with razor-sharp precision and increased productivity.

Constantly monitoring all the macro- and micro-nutrients for plants to provide them with everything that they need to thrive. The exact same seed from the field can be grown in half the time as a traditional field farmer, leading to 390 times more productivity per square foot annually than a commercial field farm.

Plant scientists monitor millions of data points every harvest, constantly reviewing, testing and improving the growing system using predictive analytics to create a superior and consistent result. With remote monitoring and controls in place, the typical risks associated with traditional agriculture are minimised.

A patented, reusable cloth medium for seeding, germinating, growing, and harvesting. The growing cloth medium is made out of BPA-free, post-consumer recycled plastic, each taking 350 500ml water bottles out of the waste stream. The cloth can be fully sanitised after harvest and reseeded with no risk of contamination, acting as a barrier between the mist and the plants.

*Adapted from here – courtesy of AeroFarms 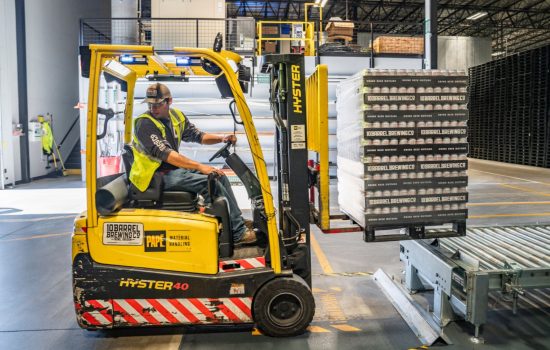