Women in manufacturing: a marathon not a sprint

Posted on 29 Apr 2016 by Victoria Fitzgerald

Increasing the amount of women in manufacturing is a slow burn. But what is hindering the stoking of this particular fire? Victoria Fitzgerald reports.

According to Women in Engineering, enabling women to meet their full potential in work could add as much as £2tn to annual GDP in 2025, but what does “full potential” mean? A 50/50 split in the manufacturing and engineering workspace in the next decade?

If the rate of change continues at its current pace, we are unlikely to hit the aforementioned mark. But we shouldn’t be disappointed, it is happening it will just take at least a generation to even begin to become apparent.

The power is in our hands to bolster the movement to intensify the changes that will be more apparent in 20 years’ time. Senior Employment and Skills Policy adviser at EEF, Verity O’Keefe told TM efforts need to be focused on what is happening at a grass roots level.

She explained, “We talk about it a lot, everyone seems to agree on what needs to be done, but we seem to be quite ineffective in actually getting it done. We know that at Key Stage 4 level, the numbers of young boys and girls taking key stem subjects is pretty equal. At Key Stage 5, when decisions are being made, you see a massive drop off, particularly in physics and maths.”

The difficulty here is students are missing out on subjects which are a prerequisite to subjects conditional to manufacturing relevant degrees.

She added, “It’s about going back and informing young women and explaining how early year plans can impact them.”

Not only this, but O’Keefe urged that “both vocational and academic pathways need to be valued equally”, as well as, fostering better relationships between education and industry.

She added, “Schools now have a responsibility to provide careers provision. Yet Ofsted showed in a 2013 report that on the whole, schools are failing to do so. The Secretary of State has announced a new regulation stipulating that schools have to engage with FE colleges to talk about apprenticeships.”

Although, O’Keefe thought this wasn’t enough, “More intervention needs to happen in that space.” O’Keefe highlighted that women opting for manufacturing careers more often come through the academic route, citing that 15% of engineering graduates were women compared to 7% of apprentices. “We still haven’t quite got that vocational route for women right,” she added. 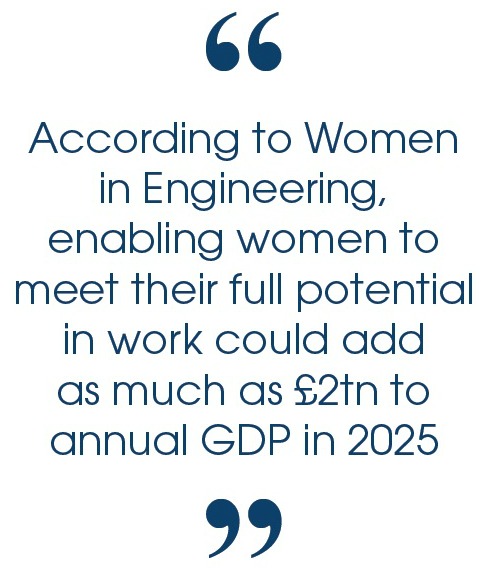 From KS4, female students usually go onto sixth form, with a meagre 5% taking up an apprenticeship. According to O’Keefe, this figure has remained the same for four years, while the uptake of sixth form has increased. The repercussions for manufacturers are grave because apprenticeships are where they “tend to recruit”.

She added, “We really need to look at how schools are funded to ensure they are equally as valuable to a vocational pathway.”

While delivering adequate careers advice at KS3 and KS4 is important, it’s imperative that measures are taken to intervene earlier in education, and we are beginning to see this happen in primary and nursery schools with the support of organisations like Primary Engineer, which aims to provide practical maths, science and design and technology activities and events to get young girls and boys interested in STEM.

However, we have to take some responsibility for raising the profile of STEM and its opportunities. Last year The IET released a report revealing only 7% of parents would encourage their female children to pursue a career in engineering.

A third of parents of girls said their child would be most interested in pursuing a career in education and childcare, another third said the arts, a quarter cited healthcare and a similar number said hair and beauty. In contrast, parents of boys stated they thought information technology, sport and engineering were all sectors that would appeal to their child.

How can we hope to create lasting change if young people’s predominant influencers are deterring them from STEM careers?

The way industry markets itself has got to change. Manufacturing has the potential to change peoples’ lives, plain and simple.

In 1919 Iris A Cummins contributed an article entitled The Training of a Civil Engineer to a Women in Engineering’s publication of the same year, she wrote that becoming a competent engineer, “will place much valuable knowledge at the disposal of the community, and thus play a worthy part in the great advance of civilisation”.

If Cummins knew that in 1919, then why, almost a century later, can very few people explain exactly what an engineer does? Campaigns like Engineer a Better World, a programme from Rhe IET designed to inspire more parents to encourage their children to become engineers are stimulating the movement, but O’Keefe thinks there needs to be better communications between industry and education. 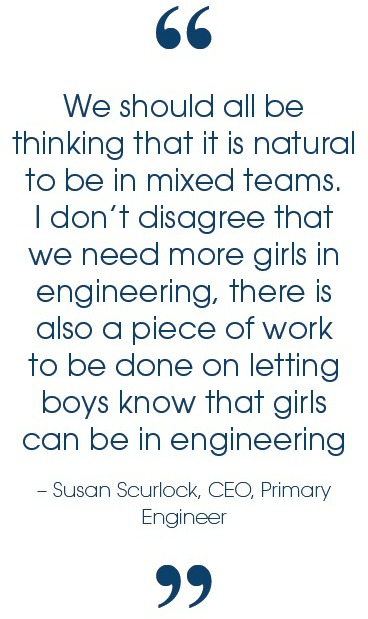 “We’ve overcome concerns about CRB checks and regulations, so it is easier to engage with schools. I think the problem is, how does each party make those initial contacts, who do they talk to, and in what language do they speak? It’s the age old problem that industry is not good at talking to education and vice versa. We need to fix that.”

Liz Town-Andrews, director of Research and Enterprise at the University of Huddersfield sees a problem in the way schools are delivering the curriculum, she told TM, “I think we’re not teaching science and engineering subjects properly. I think we use old, traditional approaches for teaching complex mathematical, scientific and engineering principals.”

Town-Andrews is passionate about manufacturing’s alliance with creative subjects, believing that STEM should include Art to become STEAM. She elaborated, “We need to look at innovative approaches to teaching and one way you could do that is through using design and creativity, as a way to communicate complex principals.”

Susan Scurlock, CEO of Primary Engineer, agrees with this, but thinks that getting young boys and girls used to working together can support the idea. She told TM, “We should all be thinking that it is natural to be in mixed teams.

“I don’t disagree that we need more girls in engineering, there is also a piece of work to be done on letting boys know that girls can be in engineering. If you start that in primary school, then it becomes normal for boys and girls to work together. That’s how you change the world.” 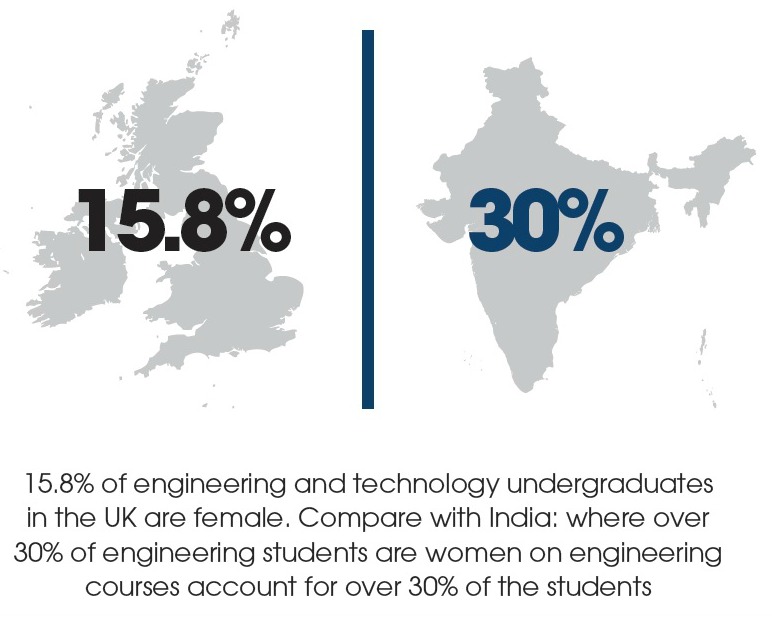 Scurlock placed the emphasis on equality and told me that she wasn’t keen on “everything being focused”, in particular, when bursaries are made available for girls when “there’s a lot of boys that could do with that sort of support”.

Industry has a part to play in marketing manufacturing as a great industry to work in. Manufacturers need to advertise the message that if women enter the sector they will be offered a prosperous career.

O’Keefe elaborated, “Once firms have attracted women in, they need to ensure that they perform best practice in flexible working, and not just offering the right to request shared parental leave for example, which of course everyone has, but promoting their offers.

“Exemplary members that I speak to encourage diversity and inclusion on their websites. They promote that flexible working is not just something they offer, but something they actively encourage.”

O’Keefe also highlighted that companies need to ensure there are routes to progression. “Some of it seems common sense,” she said. “But when we look at the numbers actually doing a combination of everything, it’s not as great as we would expect. 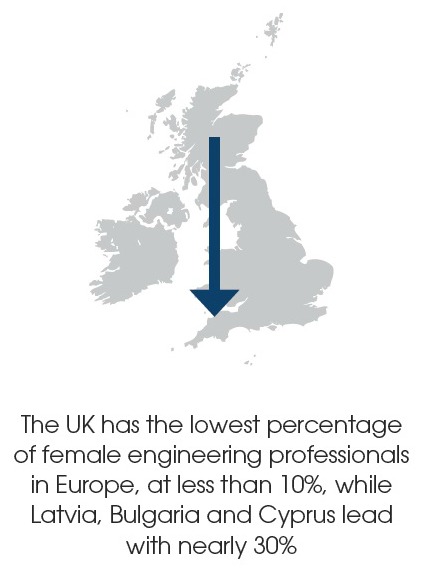 “Some companies might say they offer flexible working or competitive salaries, but potential employees want a combination of all of those things. We see a lot of companies really focusing on their maternity package, offering enhanced maternity schemes and back to work bonuses.”

These best practices will ensure that manufacturing is continually attracting talented women into the sector at various stages in their careers, as well as retaining them.

There are deep-set cultural barriers at work here. For instance, shared parental leave is available for working parents, however, the take-up is low because historically women have been the primary carers and this view is prevalent. Additionally, there is a stigma attached to male parental leave, with many individuals fearing adoption of the scheme would indicate a lack of career dedication. The more widely this option is accepted; the more equality we will begin to see throughout every level of the sector.

Achieving gender balance in manufacturing has already begun. It is driven by changing perceptions of manufacturing among the wider community; the union of industry and education, and those organisations working tirelessly to bring them together in the name of STEM; and by promoting flexible working and clear paths of progression.

The good news is, each person I questioned about gender equality had great confidence in where the movement was going. Scurlock admitted a “big thing for 50/50 by 2020” and Town-Andrews was likewise hopeful for a truly equal future for manufacturing, an equilibrium she believed achievable, in part, as a result of automation an robotics.

She explained, “I think as engineering moves towards automation, robotics and digital methods you will see more and more girls moving through. The concept of it being a blue collar job will change as more digitisation starts to take a role. The more people that see the applications, the worth and the impact, girls tend to be driven by this; they like to see the benefit of what they are doing to society.”

Attracting women into manufacturing is simpler than you think, it’s not by making everything pink or using the Venus sign on promotional materials.

By marketing manufacturing jobs as creative, exciting, well-paid and a medium through which the possibilities to change the world are infinite, the sector will find the talented individuals it’s looking for.

And this goes for both sexes: money, excitement, and an opportunity to change the world are genderless perks to any job.