Overall Equipment Effectiveness, or OEE, is the gold standard for measuring manufacturing productivity. It is used to evaluate how efficiently a manufacturer’s plant is being used, identifying losses, benchmarking operations, and highlighting areas of improvement. But for many manufacturers, accurately measuring OEE presents a challenge because they have always done so manually, using paper, spreadsheets, and flip charts.. While this  works, it does not provide the kind of deep insights that digital solutions do and is prone to error.

This article has been provided by Gábor Göncz, (Saint-Gobain Weber factory manager) formerly: Danone and Heineken technical & production manager. In it, he highlights how manufacturers can start accurately measuring OEE using digital solutions, namely Evocon, in this case.

The aim of this article is to give manufacturing organizations an easy-to-understand summary of the state-of-the-art methods and benefits of measuring production efficiency.

Nowadays, due to the rising costs associated with raw materials, energy, wages, and more, increasing competitiveness, realizing efficiency gains, and reducing losses are more important than ever.

With the advancement of digitalization, Industry 4.0 offers a number of solutions for manufacturers to increase competitiveness. Perhaps one of the most powerful solutions is the real-time Overall Equipment Effectiveness (OEE) monitoring and measurements that factories have implemented. 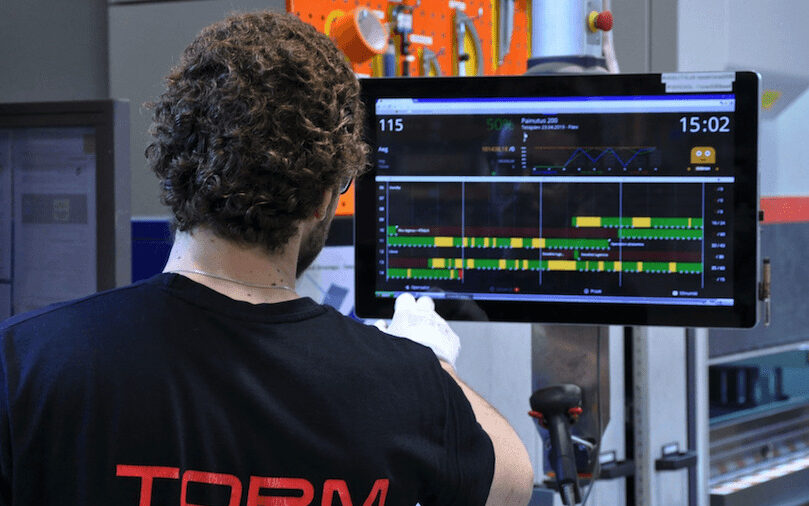 The advanced industries that have been at the forefront of the LEAN methodology for years, required a way of precisely measuring their OEE. As a result, many invested and developed their own individual systems, training their people and committing themselves to the developer in the process. In other situations, the parent company invested in very industry specific systems. However, organizations found that their people were averse to the new modern systems simply because they were so used to doing things a certain way.

Fortunately, for most manufacturing companies, unique and costly systems are not necessary and accurately and intuitively measuring OEE can be done much more cost effectively.

Evocon’s high level solution enables such real-time OEE monitoring. Plus, it is simple to implement and does not require the organization to make a significant investment, or commit itself to a single vendor.

This is our own experience of implementing Evocon and the benefits we realized as a result.

OEE is widely regarded as the industry gold standard for identifying underperforming parts of the production process. For many manufacturers, OEE is considered to be the most popular metric to track.

By monitoring OEE and identifying underperforming components, manufacturers can devise development plans to address them, which often lead to cost savings, capacity expansion, and a myriad of other tangible benefits. 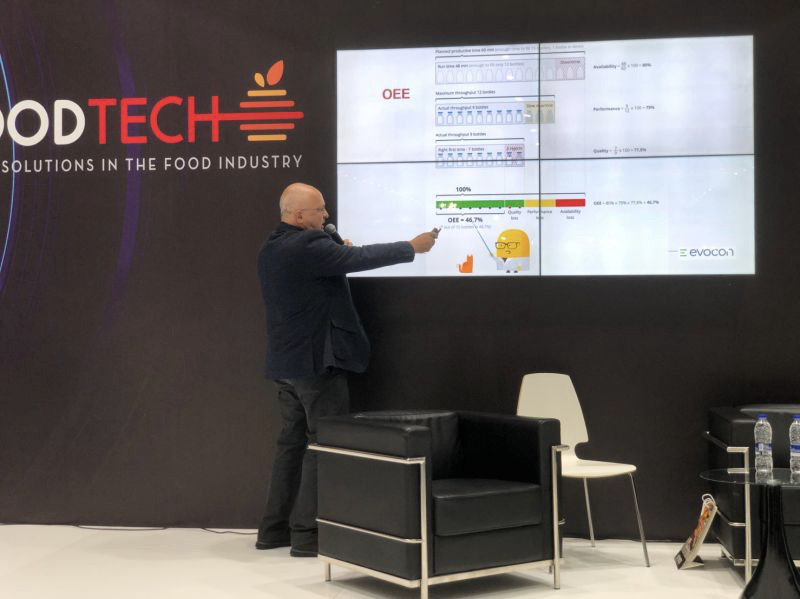 Without precise shutdown and interruption information, manufacturers will never truly know how efficient their production lines really are. With manual recording, workers often overlook incidents of shorter downtime, resulting in potentially hundreds of hours of downtime a year not being reported. In many cases, these short periods of downtime can be traced back to easily preventable and simple causes, which, following resolution, will dramatically increase efficiency. 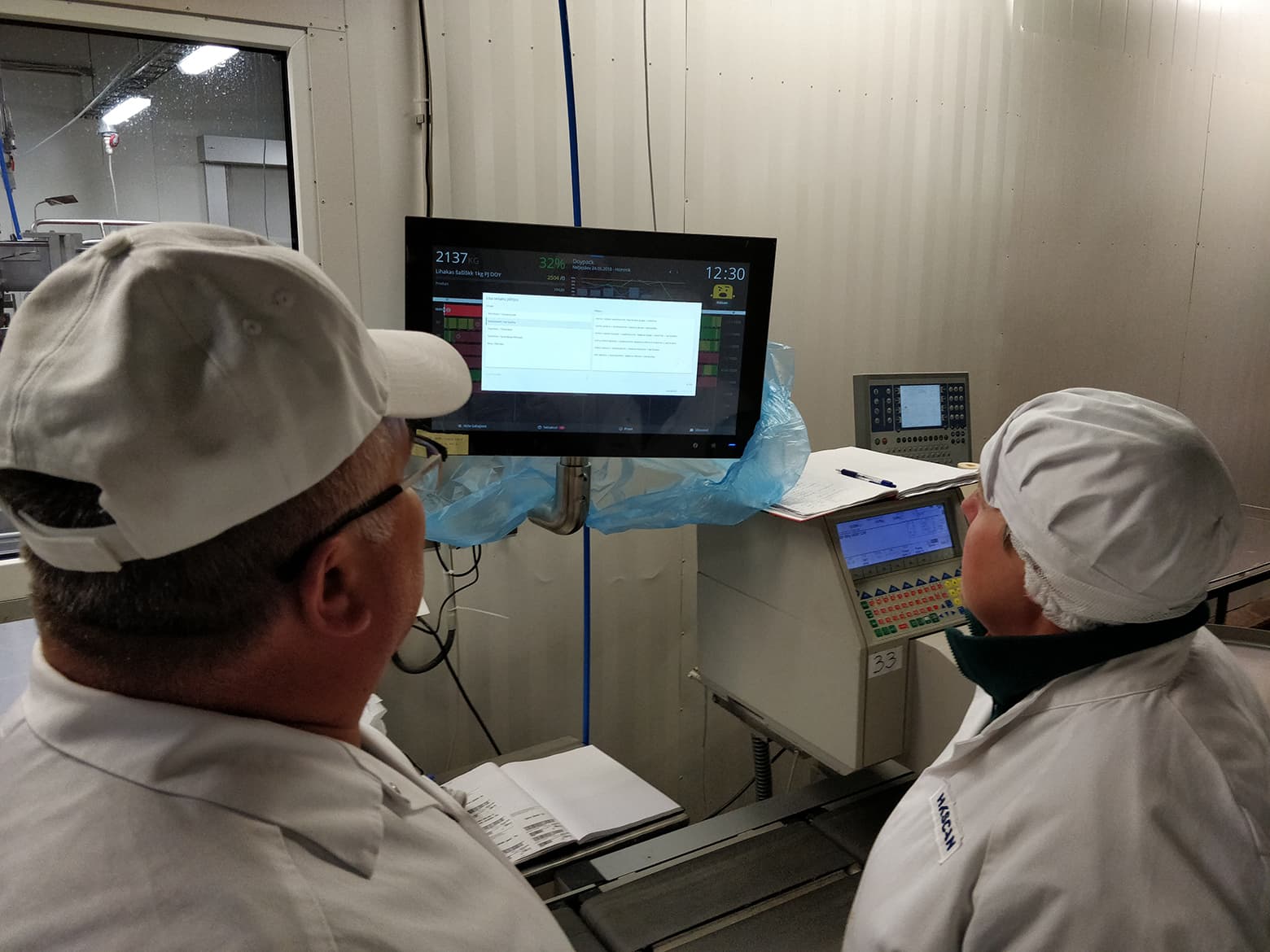 Often, manufacturers believe they are world-class when it comes to efficiency, but that is mainly because they are not tracking it closely enough. Once accurate measurement is introduced, it often turns out to be only ~ 60% and there is significant scope to improve.

A new level of production measurement

Manual data collection and calculation requires a lot of time and energy from everyone, and the result is often questionable. With advanced OEE monitoring, the production manager, production line workers, and company management get sight of truly reliable data in the same way, which greatly reduces any potential distrust.

With such systems in place, many factories project OEE metrics on large monitors next to their production lines. This is one of the first steps that is suggested in TPM / Lean, helping line workers to respond quickly and creating an informative environment. 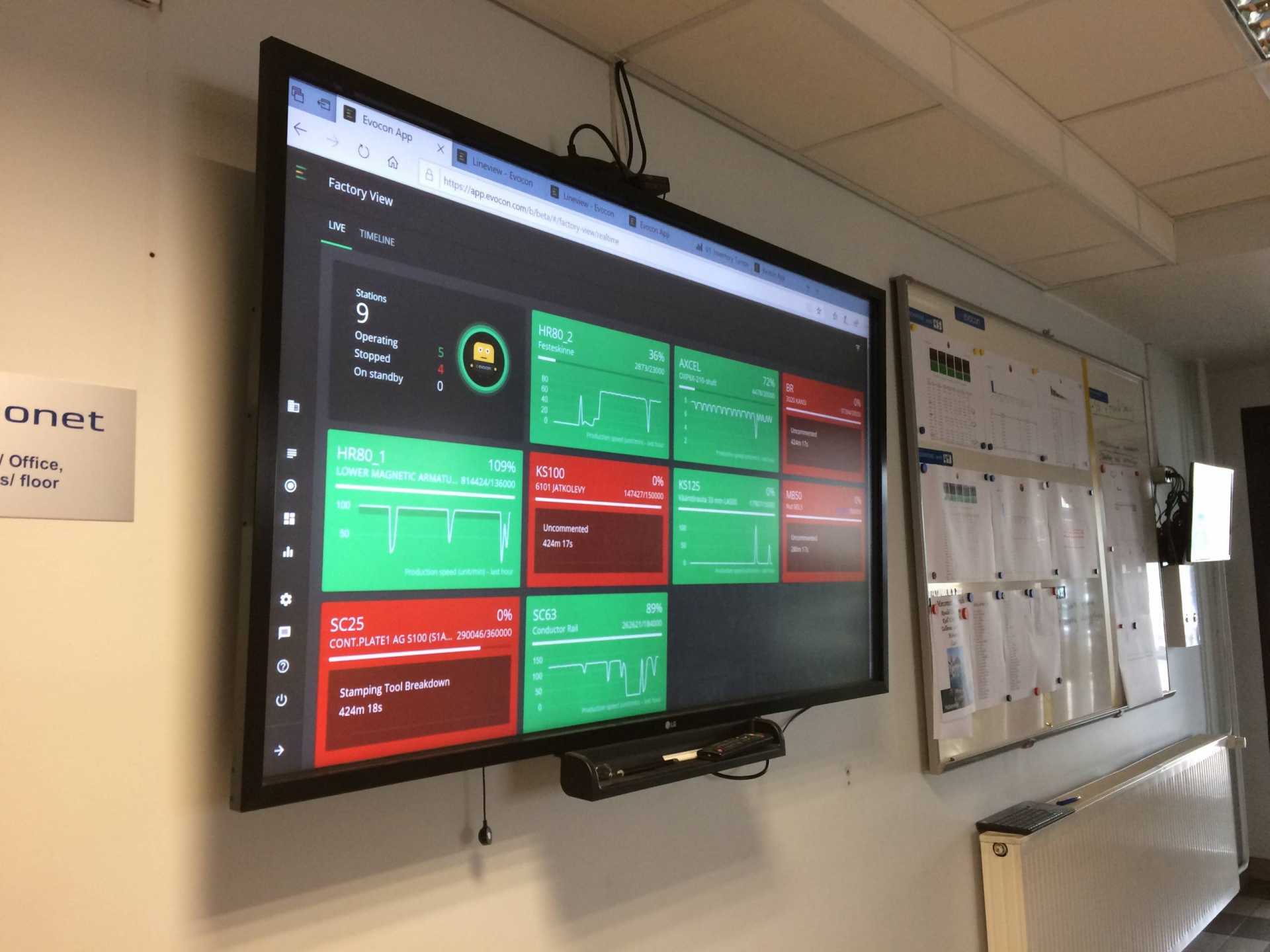 Most manufacturers set a OEE% increase as a premium target. So this indicator is one that is guaranteed to get a lot of attention from everyone.

Employees soon recognise the importance associated with a relatively high OEE% increase and will often start suggesting development ideas with a view to trying them out. This would likely not occur if the majority of workers felt that they had already achieved maximum OEE.

Another problem associated with OEE premium targets that are based on manual data collection, is that employees even question their own data. Additionally, they do not see through the calculation, which shifts the responsibility to the production manager. In such cases, the management of the company may also be criticized for not having to pay a bonus.

Continuous measurement often reveals the competitive spirit between shifts. The reality is that it is usually a friendly competition between shifts to see who can bring the greatest efficiency gains to the organization. The system also allows for the tracking of efficiency records, which can then be used in an organization’s reward initiatives. This is a much more accurate indicator than simply the quantity produced because it provides a much broader and more detailed picture.

Today, there is an increasing focus on employer branding and employee advocacy, i.e. how likely employees are to recommend and promote their workplace. A visual monitoring system displayed on TVs and smartphones creates an even more modern environment, even if production takes place on 20-30 year old production lines. Being seen to be innovative and embracing digitization is an attractive proposition when it comes to recruiting new staff. 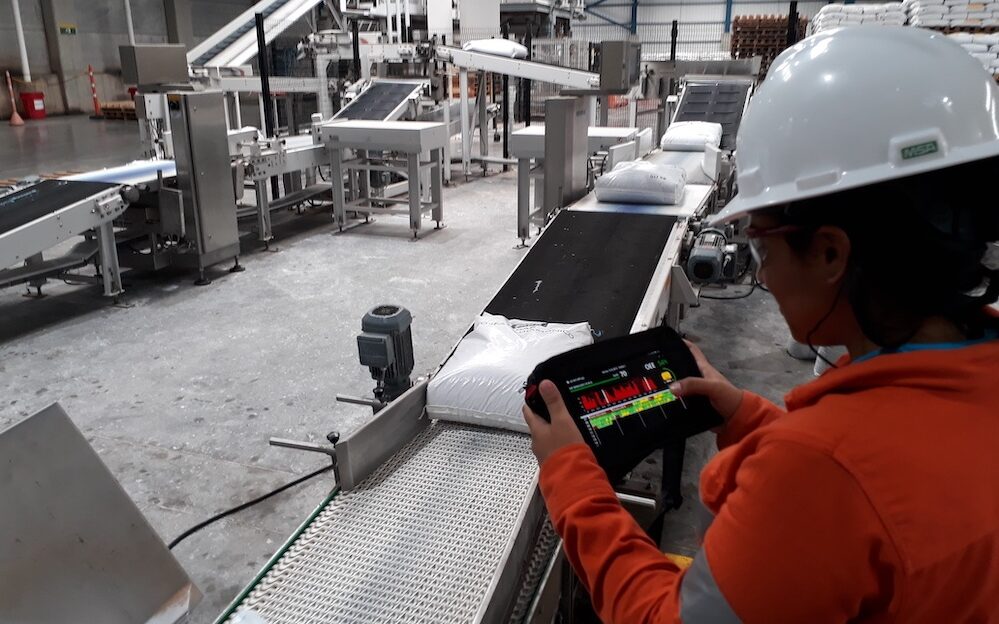 Audits and partner visits are commonplace for most manufacturers, and with OEE accurately tracked, visual and modern presentations can be held for the occasion.

The vast majority of production managers report that workers love Evocon. One reason for this is because it makes it crystal clear what is expected of them and makes the system of measurement fair and objective driven.

OEE is often seen only as a measure of production, although it is also a financial indicator for company management. Examining the three components of OEE separately, the following 3 losses we see are:

It is recommended to calculate how much a 1% OEE increase will bring in terms of savings per week or per year, and how much it will increase production capacity. Due to effective improvement, the scrap rate is also always reduced. The associated loss can come to millions of euros, even for smaller production lines.

Based on experience, where OEE monitoring is introduced, 10-15% OEE growth can be achieved in the first years. If we think about it, just by introducing measurement, everyone becomes more interested in improving the numbers. The most important considerations can then appear in everyone’s goal and associated bonuses.

If management is aware of the production processes, and the exact utilization and efficiency (OEE) of the current production lines, a view can be taken to maximize them in case of increasing orders, potentially enabling the postponement of new investment in capacity. 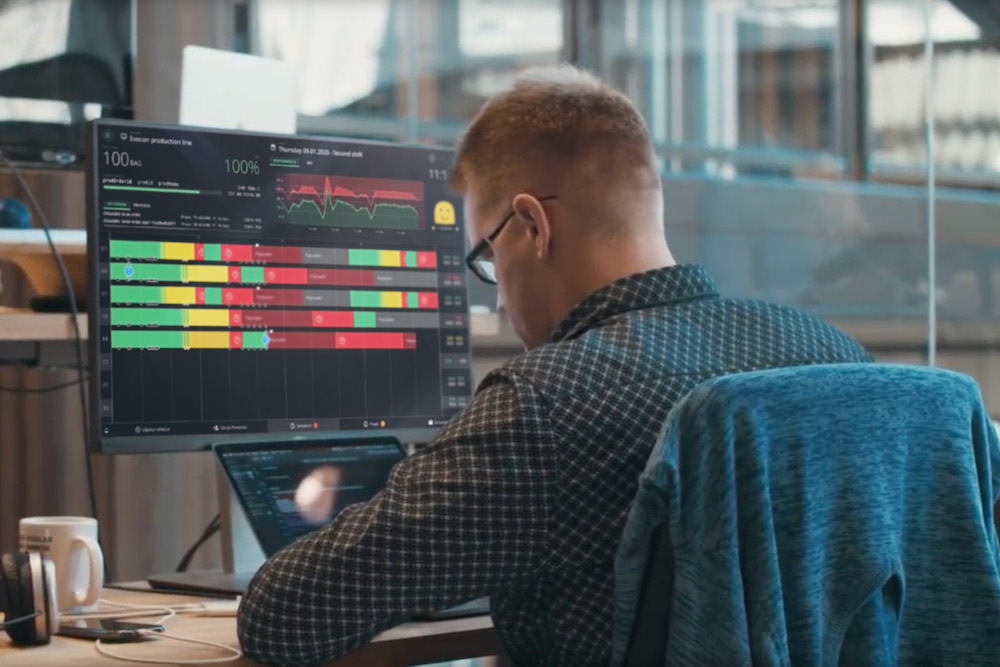 Being aware of the exact OEE makes it possible to accurately plan for the number of shifts and headcount required. Not only can this lead to higher profits, but a manufacturer may choose to offer a more competitive price, thereby increasing its market share. Furthermore, by making better use of its capacity, the manufacturer can achieve further OEE improvements, resulting in additional savings on the already increased production volume.

All of these considerations cannot be made with great certainty without accurate measurements.

Using the system, maintenance teams also get a lot of valuable information, and in addition to analysis, alarm notifications can be set up, allowing troubleshooting to begin faster.

Using statistics collected by the software and monthly-weekly charts that can be obtained with a few clicks, the problems can be clearly identified and subsequent actions or development activities can be initiated for them, the results of which can be measured precisely.

Visit Evocon.com to find out more and to request a 30-day free trial with no financial commitment 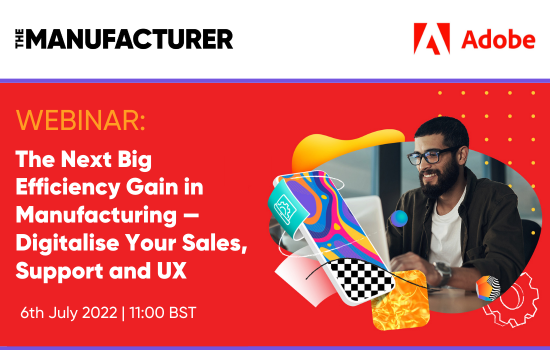 Webinar: The Next Big Efficiency Gain in Manufacturing — Digitalise Your Sales, Support and UX