New CBI analysis reveals that inaction on business rates, together with recent Government policy changes, including the National Living Wage and the Apprenticeship Levy, will cost businesses around £9 billion every year by 2020-21 and around £29 billion over the course of this Parliament. 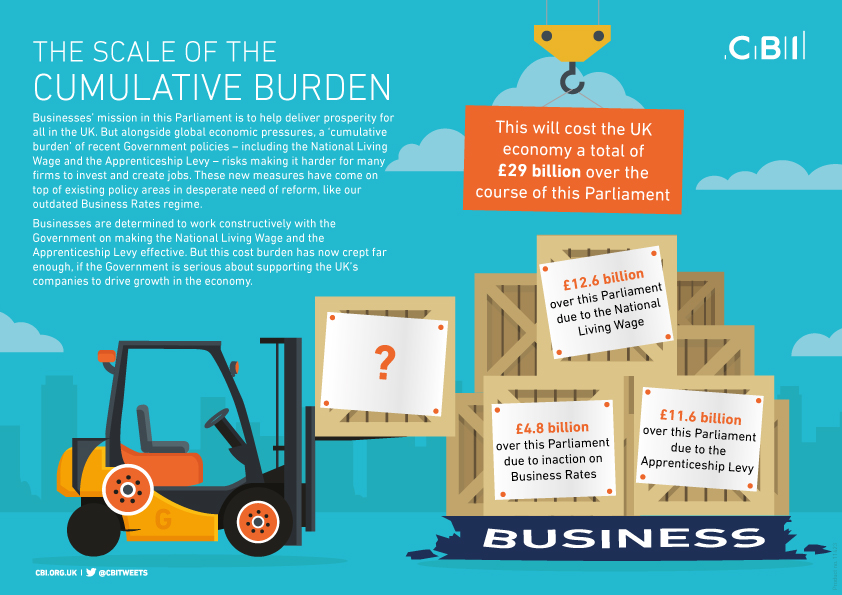 Businesses are committed to delivering jobs, investment, raising skills and living standards – and will work with the Government on implementing the Apprenticeship Levy and National Living Wage.

However, the UK’s leading business group cautions that the rising burden of policy costs has now crept up far enough, if the Government is serious about supporting the UK’s companies to drive growth in the economy.

In its Budget submission – released today – the CBI urges the Chancellor not to increase this ‘cumulative burden’ on business further, and instead calls for a series of targeted steps to back UK-based businesses and support their growth ambitions.

Carolyn Fairbairn, CBI director-general, commented: “A spate of recent Government policies, including the National Living Wage and the Apprenticeship Levy, will cost the economy around £9bn a year by 2020.

“The UK needs to be able to grow its way out of the deficit, but the danger of this rising policy burden is that it holds back businesses, particularly smaller firms.

“This cost burden has now crept up far enough, if the Government is serious about supporting the UK’s companies to drive growth in the economy.

“In this Budget, businesses will want to see the Government updating the UK’s business rates system, supporting investment through the capital allowance system and equipping our world-class innovators with the tools they need to compete globally.”

Among the CBI’s recommendations are:

Commenting on the CBI’s energy and pensions measures, Fairbairn added: “We now need to see clear and stable long-term price signals from the Government on energy.

“It’s vital that investors can unlock the capital they need to plan for construction projects that will last into the next decade, creating jobs and boosting UK manufacturers in their supply chains.

“An overwhelming number of our members have told us they are concerned by repeated changes to pensions taxation.  The Government should stick with the current system, which ensures employers are able to do more than businesses in many countries in Europe.

“Any reduction in the role of the employer would only create greater fiscal pressure on the government in the long run.”