A proactive response to an ageing workforce

Some parts of the manufacturing sector are facing an existential crisis thanks to an ageing workforce and insufficient young engineers enter the system. One company owner thinks he has the solution. Editor-at-large Nick Peters reports.

Grant Jamieson is managing director of Winkworth Mixers and should be pretty pleased with the world he surveys. After all, he exports to most of it, and so highly regarded are his products that the name Winkworth has become the catch-all name for mixers, just as Hoover did for vacuum cleaners.

The company started in 1924 and is renowned for machinery that mixes anything from concrete to chewing gum. The products are high value with long lifetimes, and they can be found from Russia to the US, Australia to Mexico, mixing products for the world’s top brands.

The company turns over in excess of £6m and employs just shy of 50 people. A classic SME success story.

But Jamieson is far from content. A cautious man, he has been watching with mounting concern what he calls ‘the trough’ moving steadily through his workforce. 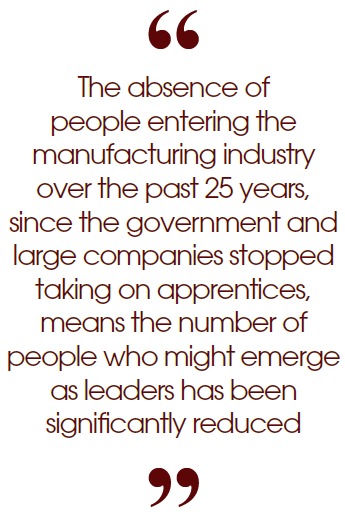 At one end he has a large number of ageing workers who are approaching the natural end to their career (although now, of course, they can go on past 65 – see Breakout Box below), and at the other he has the prospect of younger engineers joining up as a result of the latest apprenticeship programmes.

Between them lies the trough, which is 25 years long and contains very few middle-aged employees. When the older ones retire, he will have a problem.

“The absence of people entering the manufacturing industry over the past 25 years, since the Government and large companies stopped taking on apprentices, means the number of people who might emerge as leaders has been significantly reduced,” he said.

“As a result, our workforce is top heavy, with lots of people in their 50s and 60s, while under the age of 35, I only have seven people. It is a real leadership gap.

“On top of that, the absence of younger people coming up behind them means they have no one to pass on their wisdom and experience to. We’re losing all that.”

It is a crisis that hits a smaller company like Winkworth particularly hard, as competition for qualified engineers inevitably favours the bigger players in the sector. Jamieson knows exactly who he wants; he just knows he doesn’t stand a chance of finding them.

“We need competent engineers, who have served a four or five-year detailed apprenticeship, gone to day release or technical college and got their HNCs or BTECs, whatever the modern equivalent is.

“They are maturing, entering their mid to late-20s, have families and ambition – but they’re just not around in our industry the way they used to be.”

One of the ways Jamieson tackles the shortage of qualified engineers is to look around for people who may have other strengths and skills, and then train them into doing the specific role he is looking to fill.

It may not be ideal, but with decent training coupled with their own aptitude for learning, he is finding it an effective way to overcome the dangers of the trough.

He believes this is something that can be replicated at a national level, as a way not only to ease the recruitment crisis bearing down on the manufacturing sector, but also of helping those who are losing their jobs through cyclical change in their own industries.

He compares it to a game of snakes and ladders. For those who find themselves on a downwards snake, through no fault of their own, it would be mighty convenient to find a ladder offering a way back up.

He said there are close to one million people slated to lose their jobs because the sectors they work in no longer need them. He cites banking, retail and the armed forces as providing a rich opportunity for manufacturers, so long as there is a mechanism in place for reskilling these laid-off workers.

“These are really competent people,” he said, “Who I suspect can be good contributors to manufacturing and engineering, if they are given the means to transition from one career into another.”

Enter the Master’s in Manufacturing qualification that Jamieson believes can take leaders and potential leaders from declining industries and give them the skills required to fill the leadership vacuum bearing down on the manufacturing sector.

“It’s very similar to the MBA, where people with talent and aptitude can take a Master’s in Business Administration and become business leaders. I think we can do the same with a Master’s in Manufacturing qualification.”

At present, this remains a one-man crusade, but he is confident that if he can get the support of other leaders in manufacturing the case can be made at a national level for a solution to the ticking time bomb represented by the ageing workforce.

Given Grant Jamieson’s problems with an ageing workforce not being replaced by younger blood, you would be forgiven for thinking the abolition of the statutory retirement age takes some of the pressure off him, but you’d be wrong.

It has actually opened up a whole new range of problems which, as the MD of a small company, he has a disproportionate amount of difficulty handling.

At a human level, Jamieson is facing serious difficulties with managing the eventual exit of these older workers from his business. Of course he can’t ask them to leave because that would be ageism and unlawful.

At the same time, these older workers are becoming less agile, mentally and physically, and unless they themselves recognise it is time to call it a day, he is having to face the prospect of putting people he’s known and worked with for decades through the humiliation of the performance management process.

“As the owner of the business and as the manager, the last thing you want to do is be hard on somebody you respect,” he said, “but the only way the employer can legitimately take the initiative, in order to get the churn that would have occurred naturally, is performance management which to most of us would appear quite aggressive. The Government’s policy has backfired in that respect.”

For the employee who is being managed out of the business, it can be confusing and distressing, very much not the transition into retirement they had in mind, and Jamieson is entirely sympathetic.

“If I’m in that position in 15 or 20 years’ time and someone else, not me, has recognised that I can’t do it anymore and it’s time to call a halt, I too would feel unjustly treated, particularly after years of positive service.

“It’s a very uncomfortable and emotionally upsetting situation an increasing number of companies, particularly in engineering, are going to find themselves in as time goes by.”

As chairman of the PPMA – the Processing and Packaging Machinery Association – Jamieson knows of the growing concern over this issue.

He says the best way to deal with it is in a positive way, through negotiation, that eases older workers into retirement gently, through flexible working and reduced hours.