A lightweight fuel tank for small-scale satellites has been designed and developed by metal additive manufacture engineers at the University of Sheffield Advanced Manufacturing Research Centre, as part of a pioneering UK Space Agency-funded programme.

With the annual number of small satellites deployed forecast to reach about 400 this year, an increase of 300% compared to 2016, there is a growing market need to dramatically expand their mission capabilities, extend their orbital life and decrease the cost of constellation deployment.

Current nanosatellite and microsatellite propellant storage systems either use volume-inefficient but structurally strong cylindrical and spherical tanks. This means there is much interest in the development of fuel tanks, currently one of the heaviest components of a propulsion system.

Abdul Haque, technical lead in metal additive manufacturing, inspecting one of the AM fuel tank prototypes – image courtesy of AMRC.

The resulting cuboidal geometry – only possible to produce through metal Additive Manufacturing (AM) – reduced the weight of the fuel tank by more than 25%, combined with an almost three-fold increase in fuel capacity over conventional spheroidal storage tanks.

This could have a significant impact on satellite launch costs, according to Abdul Haque, technical lead in metal additive manufacturing at the AMRC.

“Developing competitive propulsion solutions for small satellites is a game changer for UK space capability. The MiniTANK project lays the groundwork for adding a key miniaturised, low-cost propulsion technology to the UK’s portfolio.”

MiniTANK is a collaborative endeavour between the AMRC and Oxford-based Added Value Solutions (AVS) UK, which designs propulsion systems for small-scale satellites.

Backed by the UK Space Agency’s Pathfinder programme, the aim was to develop a lightweight, high-strength fuel tank for a nanosatellite that maximised internal volume while minimising mass. 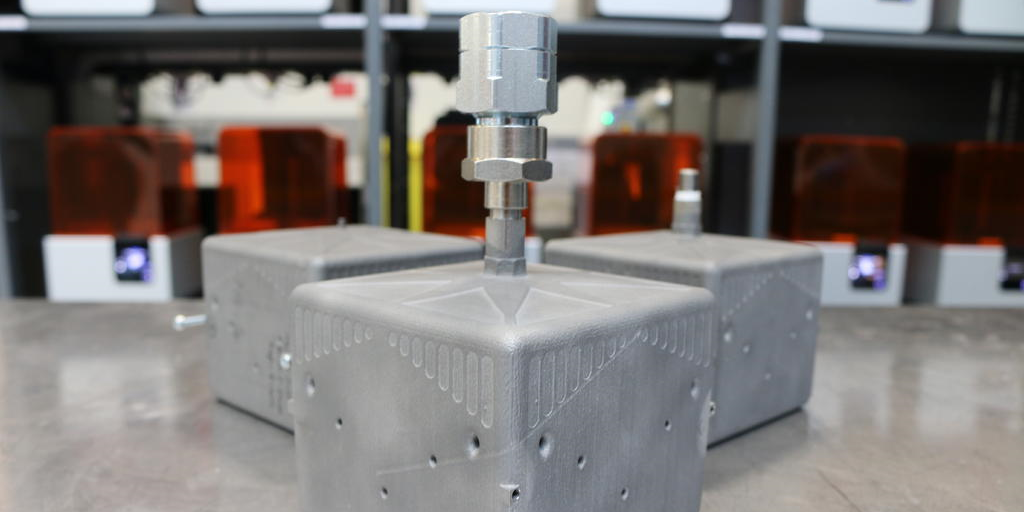 AM fuel tank prototypes developed by the AMRC team – image courtesy of AMRC.

Additive manufacturing allows you to create complex forms that are un-manufacturable via conventional methods.

Abdul explains: “By moving away from a sphere to a cube immediately allowed us to increase the amount of propellant stored in the tank, the volume utilisation was increased from 60% to 90%.

“As you would expect a sphere to be structurally stronger than a cube, we used topology optimisation tools to optimise the design, which suggested using a stiffening geometry to resolve some anticipated distortion.”

Laser Powder Bed Fusion (LPBF) was used for the fuel tank manufacture; this is where a fibre laser is used to impart thermal energy selectively to fuse regions of fine metallic particles to form a Near Net Shape (NNS) component.

These early stage prints show some of the initial ideas for the internal structure of the fuel tank – image courtesy of AMRC.

Abdul added: “We printed the fuel tank out of titanium because it allows us to create a lightweight structure as its specific strength is high compared to other alloys.”

“For space, although we’re talking a matter of grams, such a weight saving is hugely significant. If you can shave one kilogram off your launch load, it can be potentially £7,000 to £15,000 in terms of cost-saving off the launch.

“What AVS is working towards now is designing a CubeSat propulsion system potentially using the fuel tank that we’ve 3D printed and are developing several other components that need to be amalgamated into the whole system. They want to print some further iterations of the fuel tank in the future and do some actual launch tests.”

MiniTANK has a wider impact too, as Abdul concludes: “Although this project focused on the fuel tank – if you take a system-level approach and carry out the same optimisation to other components – the microwave generator housing, the propulsion system, brackets that connect solar panels, the framework – you are shaving weight off every assembly component.

“In total that might save a lot more material, so MiniTANK is not an isolated case, we should be looking at the entire satellite system to get the maximum benefits offered by AM.”