AFRC: a catalyst for innovation

The phrase ‘Valley of Death’ – used to illustrate the difficulties in effectively bridging research and commercialisation – is oft quoted, particularly when employed to describe the UK’s innovation environment. Yet the term’s frequency of use mirrors the growing number of organisations that exist to help companies tackle this very challenge.

One such channel is the High Value Manufacturing (HVM) Catapult network, seven centres with the goal of helping manufacturers of all sizes and sectors turns ideas into commercial applications. [See breakout box below]

According to Dr Michael Ward, chief technology officer at the Advanced Forming Research Centre (AFRC), these centres play a fundamentally vital role in providing somewhere for manufacturers to forge the necessary partnerships innovation needs to thrive.

“Historically, even large companies were restricted as to what sort of developments they could do themselves or by partnering with either a university or an equipment vendor. Now, these centres provide a mechanism, in the form of a well-resourced, established and technologically well-funded network, to support innovation,” Ward explained.

“The success of the HVM Catapult network, which I would describe as being quite unprecedented in the UK, certainly in the field of manufacturing innovation, fills the clear gap of being able to demonstrate and test technologies or combinations of technologies at production scale in an industrially relevant way.”

The High Value Manufacturing (HVM) Catapult Centres are part of the wider Catapultprogramme, established by Innovate UK, and encompass:

The success of which Ward is so evidently proud is clearly demonstrated by the network’s latest results, which note combined assets total more than £560m; investment in capital projects is worth almost £75m; close to 2,000 engineers, technicians and support staff are employed, and every £1 of government core funding generates £15 of net benefits to the wider UK economy.

To date, the HVM Catapult network has worked with more than 3,000 private sector clients, of which over half (around 1,700) were small and medium-sized. Yet there exists a perception that the centres exist simply as a playground for large or multinational companies with deep pockets. It’s a perception Ward can appreciate, but is eager to dispel.

“It would make little sense in establishing something like the HVM Catapult network to try and address lots of very difficult, technical problems in companies that aren’t naturally amenable to conducting innovation activity.

“Therefore, in the initial years, it’s entirely correct to target those opportunities that are going to make a difference because the key ingredients for success are there, and because you create momentum by having projects that you can point to as having succeeded.”

Ward noted that the centres have been very effective in establishing connections and awareness in what could be considered the first wave of the most obviously suitable, predominantly blue chip companies. Now the time has come to start addressing the longer tail of SMEs, a demographic far greater in size, so it’s going to take much longer before all of them have experiences of collaborating with the network. 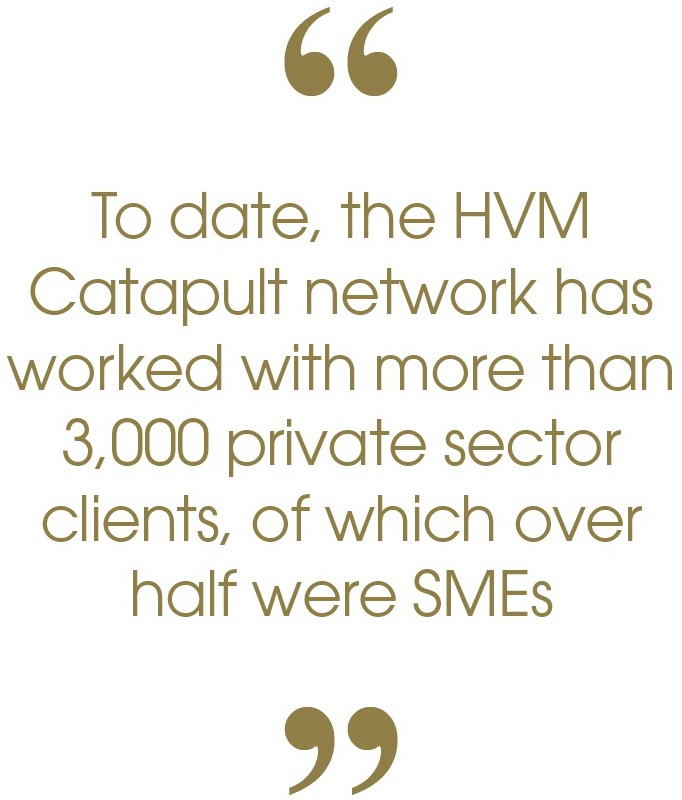 “Blue chips were inherently the low-hanging fruit when things were being first established, but absolutely we are here for companies of all shapes and sizes. We’ve got some really cutting-edge facilities and equipment, and I think for some organisations and people that offering can be slightly intimidating. It can create the impression we operate in a purely blue chip commercial environment, and nothing could be further from the truth,” Ward stressed.

First discussed in 2005, and officially founded in 2009, the AFRC was spun out of the University of Strathclyde’s engineering facility and was established with support from government and Scottish Enterprise.

Employing around 140 people, the centre is involved in world-leading metal forming and forging research from material testing and characterisation through to industry-standard manufacturing trials and advanced simulation expertise.

The Renfrewshire-based facility is home to a wide variety of state-of-the-art equipment across several key areas, including: hot forging and forming; cold forming; machine tools and EDM; metrology; metallographic preparation, and furnace capabilities.

The AFRC is currently the only Scottish HVM Catapult centre, something which Ward sees as absolutely vital, as several of the issues around manufacturing in Scotland are different to those you’ll encounter in the Midlands, Wales, Northern Ireland and so on.

“Our goal is to not only become a global centre of excellence for forming and forging technologies, but to more firmly establish ourselves as an access point to the wider HVM network for companies within Scotland,” said Ward.

“We don’t want to merely duplicate UK national assets, we want to open up the network to Scottish companies by being geographically convenient and removing the psychological barrier of having to collaborate with an organisation quite far away.”

Such a vision reinforces the transition in focus from large companies, for whom close proximity is less important, to SMEs, many of which would benefit from an organisation more regionally accessible.

As a manufacturing process, metal forming and forging has a long-standing legacy that goes back centuries. That poses a challenge, as it’s very easy for people to gain the impression that the process is, on the one hand, strongly established, and on the other, susceptible to being superseded by modern techniques such as metal additive manufacturing.

The reality, says Ward, tells a very different story. Additive manufacturing and composite material system will undoubtedly continue to replace many of the traditional uses of formed metallic parts and materials. However, there is still an important set of conditions when formed and folded components are unquestionably the right answer – both economically and technically – to a particular design or manufacture challenge.

One method to help overcome this artisanal, ‘black art’ perception and position forming techniques in the modern world is how the AFRC has supported a major aerospace manufacturer on near-net shape core processing technology. The centre has demonstrated how you can shape in solid state some extremely hard to form high-integrity steel alloys and manufacture them in near-net shape condition, providing much higher material utilisation from very expensive, exotic materials.

“We’ve pushed really hard in that direction as it allows our customer to have some flexibility over its supply chain. It demonstrates how slightly different ways of forming material produces a part that still has all the necessary integrity requirements for an aerospace component, in this instance. That’s one of the things that is essential to how the AFRC operates,” Ward explained.

There are a handful of overarching goals the AFRC has set itself for 2017 and beyond, chief among them positioning itself as a conduit for the wider HVM Catapult network in Scotland; investing in more general purpose technologies; further broadening its team strength to become applicable beyond the scope of forming and forging, and exploring how to support work across the whole spectrum of industry.

“When you look at the seven combined, I strongly feel that you have more or less covered bases across most types of manufacturing technology that you can think of. What a tremendous asset to have and to leverage for a business, an industry and a nation.”

Change with the time

“During the first industrial revolution, the UK’s approach was about extending its trading networks and manufacturing as a way of effectively applying value-add to what were then quite controlled markets; it wasn’t particularly through investing in infrastructure.

Circumstances have changed as we embrace the fourth industrial revolution, and the approach the UK took then may not be so appropriate today.

“Innovation is a process of taking what is available as state-of-the-art technology and translating it into something that you actually put into production. That requires an approach towards investment, fundamentally, which is where the UK corporate base has not been as progressive as you see in other parts of the world,” says Dr Michael Ward, chief technology officer of Advanced Forming Research Centre (AFRC).