Airbus in space: There is no final frontier

The UK is Europe’s leader in space technologies, in both expertise and manufacture. The furore over the UK’s possible exclusion from the EU’s Galileo GPS satellite project has obscured the fact that it is only one of the projects being developed here, as Nick Peters and Maddy White discovered when they visited Airbus Defence & Space in Portsmouth.

Companies have been developing defence and space products on what is now the Airbus site at Hilsea, on Portsea Island, since the 1950s.

Back then, GEC, the UK’s largest company of its kind at the time (with a foothold in a vast array of sectors, including defence and electronics) established a factory on the old wartime airfield. The company bought, among many others, the radio and electronics firm Marconi, and then sold Marconi’s space interests to British Aerospace in 1999.

While GEC itself sadly went on to collapse, Marconi Electronic Systems and BAE formed the UK nucleus of what was to become the European Aeronautic Defence and Space company, or EADS, which, together with the civil aircraft builder Airbus Industrie make up today’s company Airbus.

While Airbus civil aircraft wings are made in the UK, the company’s Defence & Space division is the only part of the company to have the UK deep within its DNA.

Portsmouth is not the only UK location where Airbus Defence & Space operates. It has a factory in Stevenage that builds the frame of the satellites – known as the vehicle or bus – and in Guildford it owns Surrey Satellite Technology, a former spin-off from Surrey University that now designs and manufactures small satellites.

Other sections of the business include Airbus CyberSecurity in Newport, South Wales; the development of the Zephyr solar-powered UAV at Farnborough; a satellite and aerial imagery analysis centre in Newcastle; and a military communications service centre in Hawthorn.

The Defence & Space division accounts for 20% of Airbus, and has 4,500 employees in the UK. All of this means the UK is now an important player in not just in European, but world satellite and defence technology.

This article first appeared in the May issue of The Manufacturer magazine. To subscribe, please click here

Airbus Defence & Space is a full-blown military and space company, competing in the same league as the USA’s Lockheed Martin, Northrup Grumman, and Raytheon, as well as big national (governmental) players, such as a China and India.

The space division has around 25% of the global satellite market and is active in every format of the technology – from telecoms, TV and earth observation, through to Mars exploration. 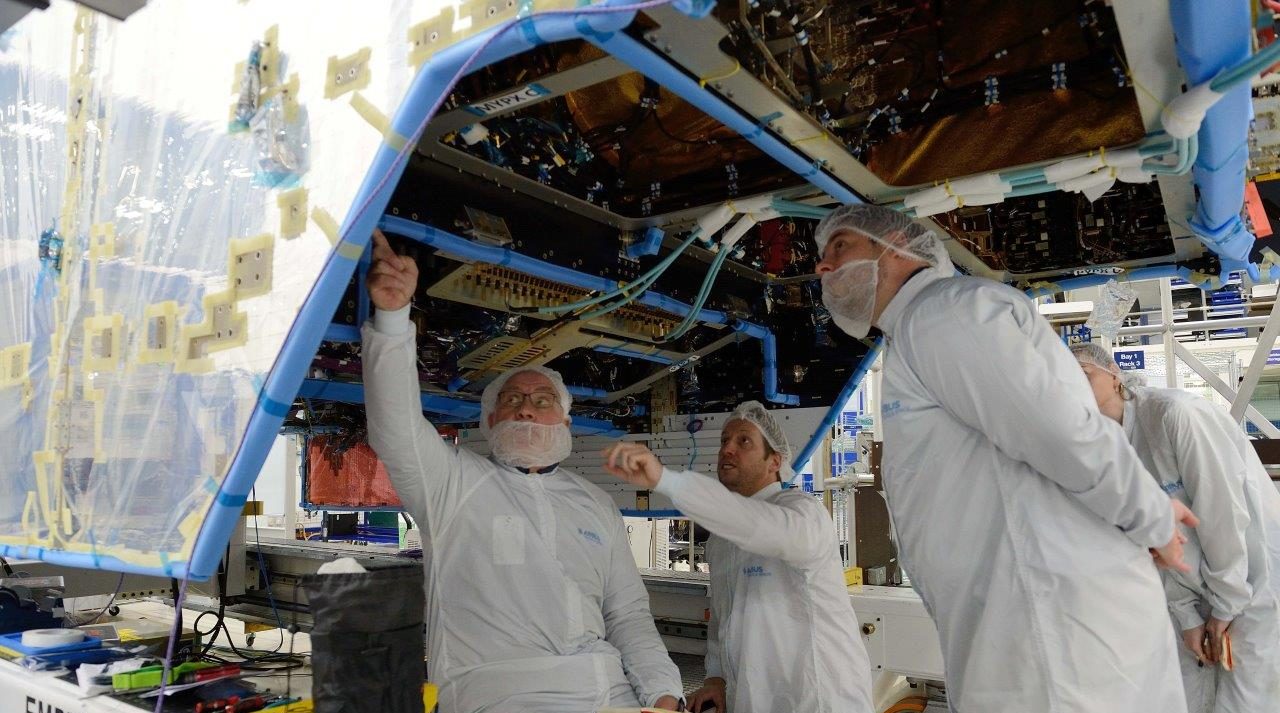 The Portsmouth site takes the vehicles built in Stevenage and adds in the bewildering array of electronics that make up the payload, or functioning element of the spacecraft.

The core function of all the transponders in the payload, particularly in telecoms and TV, is to take in a signal from the ground station on earth, boost it by many multiples of million times (it’s very weak by the time it gets to space) and then send it back to earth on a different frequency in order to avoid signal confusion. It is a tried-and tested technology, but science never stops and new technologies and methodologies continue to drive the industry forward.

The first thing you notice on entering the Neptune clean room at Portsmouth is that all the buses are made from aluminium. Given that one of the most critical parts of getting a spacecraft off the ground is weight, the thought strikes that Airbus is way behind the times when it comes to lightweighting.

We discussed this with Roy Haworth, engineering integration manager at Airbus Defence & Space, who said the company’s clients have a very conservative attitude to innovation.

These satellites have to sustain shattering levels of vibration at launch, plus endure a 300°C difference in temperature and they can’t be allowed to undergo even the tiniest degree of torsion. “Our customers need something really reliable,” Roy added, “aluminium is cheap, we understand it, and it’s reliable in such a volatile environment – when it is up there it needs to be!” 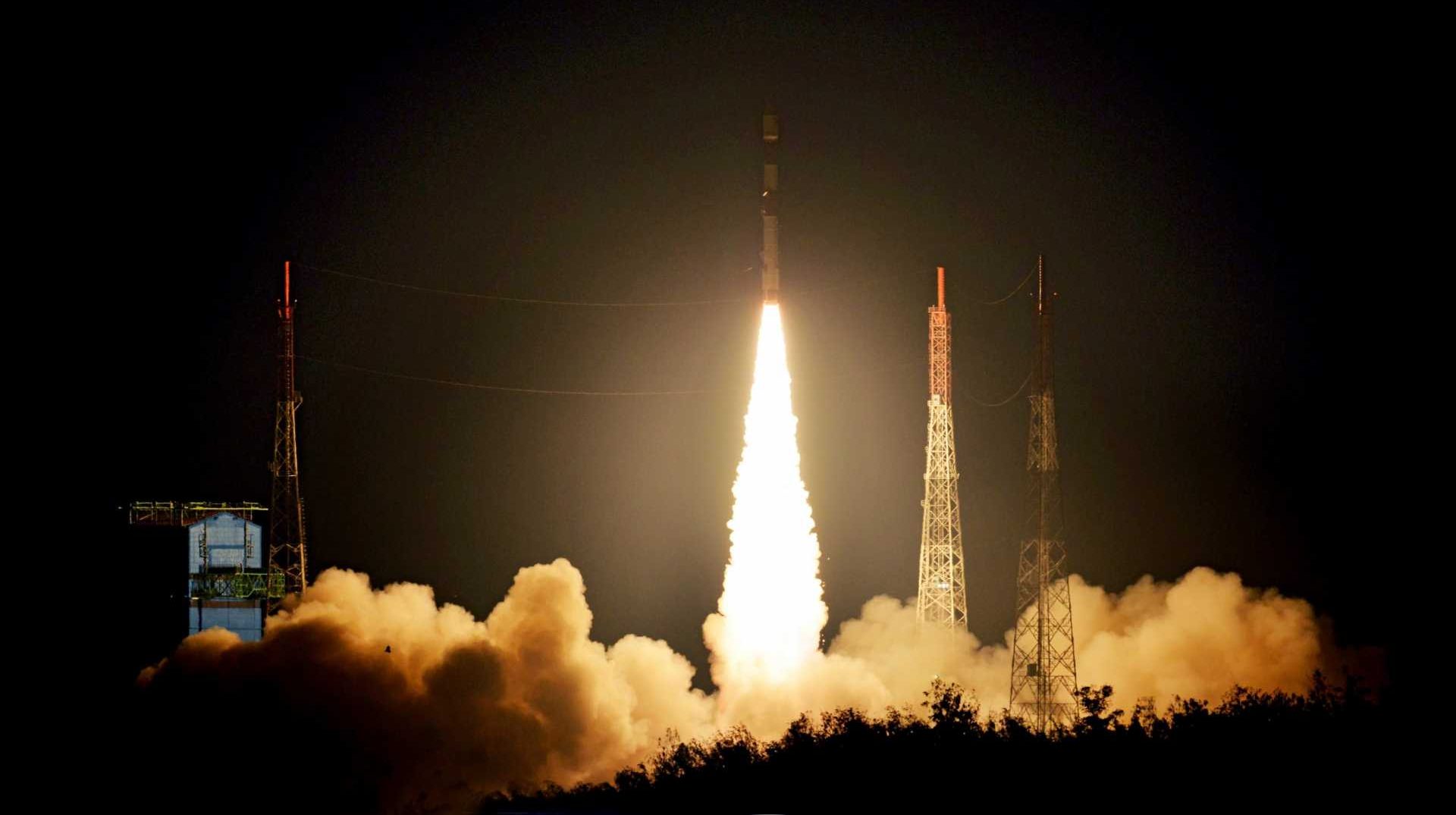 All of which means the clients are deeply reluctant to try innovation for the sake of it. Even when innovations are introduced into satellite construction, the process is slow and methodical. Environments must be simulated and thorough testing carried out on components and complete systems, meaning any new implementation requires a high level of investment and time.

“We need total reliability of everything we use because the financial risk of buying and launching a satellite is so high,” Roy said.

Just as the aircraft industry follows cautiously in the wake of automotive, F1 in particular, before adopting new materials and techniques that have been tested to destruction, so the space industry waits further down the line before embracing some of the materials that might one day allow for cheaper launches in the future. One day, just not yet. 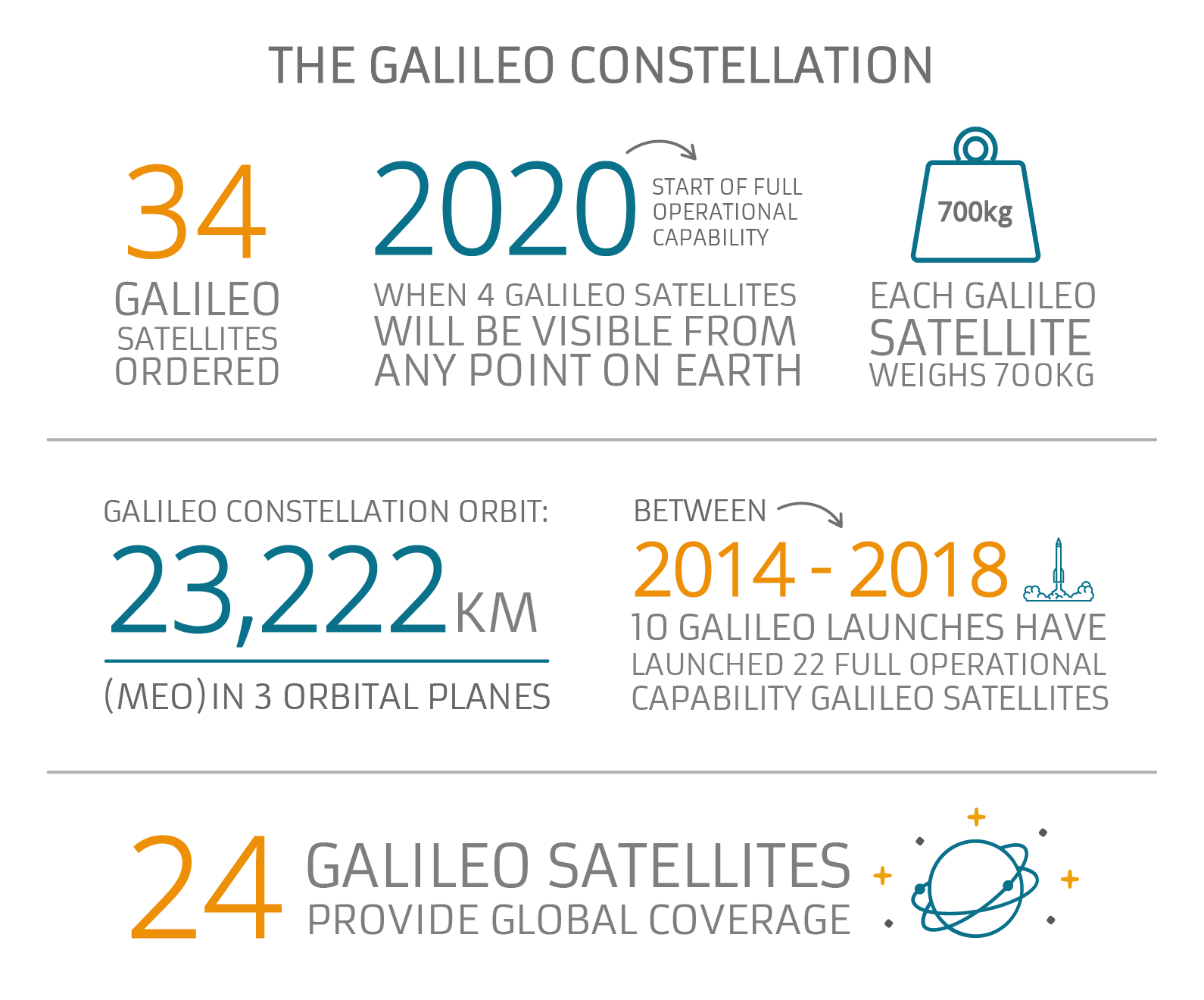 The payload for the Galileo satellites network has been developed and built at the Airbus SSTL site in Guildford.

SSTL recently announced: “ESA has confirmed that four more Galileo spacecraft have been given the green light to begin working alongside the rest of the constellation.”

This takes the number of Galileo full operational capability satellites currently in service to 22, and all of them are flying SSTL’s Galileo navigation payload – the brains of the GNSS (Global Navigation Satellite System) service.

Our role in Galileo actually began about 15 years ago when we started the design and build of GIOVE-A, a ‘pathfinder’ satellite which secured the Galileo frequency filings at the International Telecommunications Union (ITU) and which also played a crucial role as a test-bed for the Galileo payload units.

Since then, SSTL has supplied 22 navigation payloads for Europe’s fully operational global satellite navigation system, Galileo, and it is currently manufacturing a further 12 payloads. SSTL’s solution is based on European-sourced atomic clocks, signal generators, highpower TWTAs (traveling-wave tube amplifiers), and antennas. The navigation payloads are delivered to prime contractor OHB System AG in Bremen, Germany for integration into the satellite platform.”

Assembling the payload is a timeconsuming process, with accuracy by far a greater priority than speed. The E3000 architecture that Airbus offers clients comes in different sizes, depending on the desired payload, and can take from 40,000 to 100,000 hours to complete, before being shipped to Toulouse for testing.

This standardisation, combined with scalability, results in high cost savings and a more flexible approach to satellite production. Generally, the production time for a satellite, from contract to launch, is two and a half years.

It’s not a just-in-time operation, much as the Portsmouth team would like it to be. Some parts may come into stock before they are required, some later, in which case the technicians 3D print a pink plastic replica shell of the part and slot it into place, then work around it.

The difficulty comes when the real parts do arrive and technicians have to squirm their way into some very tight places to replace the 3D fakes, which by now can be obscured by the parts that arrived before them. Haworth admits it is not ideal. “Not unlike building a ship in a bottle,” he joked.

Remarkably, given the level of technology involved, there is no automation to be seen in the clean room. Wayne Littlefield, head of payload industrial project management at the AIT (Assembly Integration and Testing) division told us some of the sub-assembly work might use cobots, and they’ll begin to use AR/VR Hololens devices for inspection, but otherwise this is a very human-based enterprise.

The same will definitely not be the case for what is developing into a distinctly different kind of future for Airbus Defence & Space.

The OneWeb programme is a joint venture with global communications firm OneWeb, to introduce the ‘mass’ production of satellites for the telecoms industry.

The goal is to construct a high-speed and affordable global internet network, by deploying up to 900 small satellites that will be rapidly made and launched into orbit. With competitor satellite internet projects being developed by Elon Musk of SpaceX and Jeff Bezos of Amazon, it is going to get busy up there in low earth orbit (LEO).

Never before has a single satellite been made in one day. However, the team at Airbus say not one but several will be produced every 24 hours. This poses an enormous challenge, as it turns traditional, slow, methodical satellite manufacturing on its head: construction that traditionally takes years, will now take hours, in a fully digital smart factory. 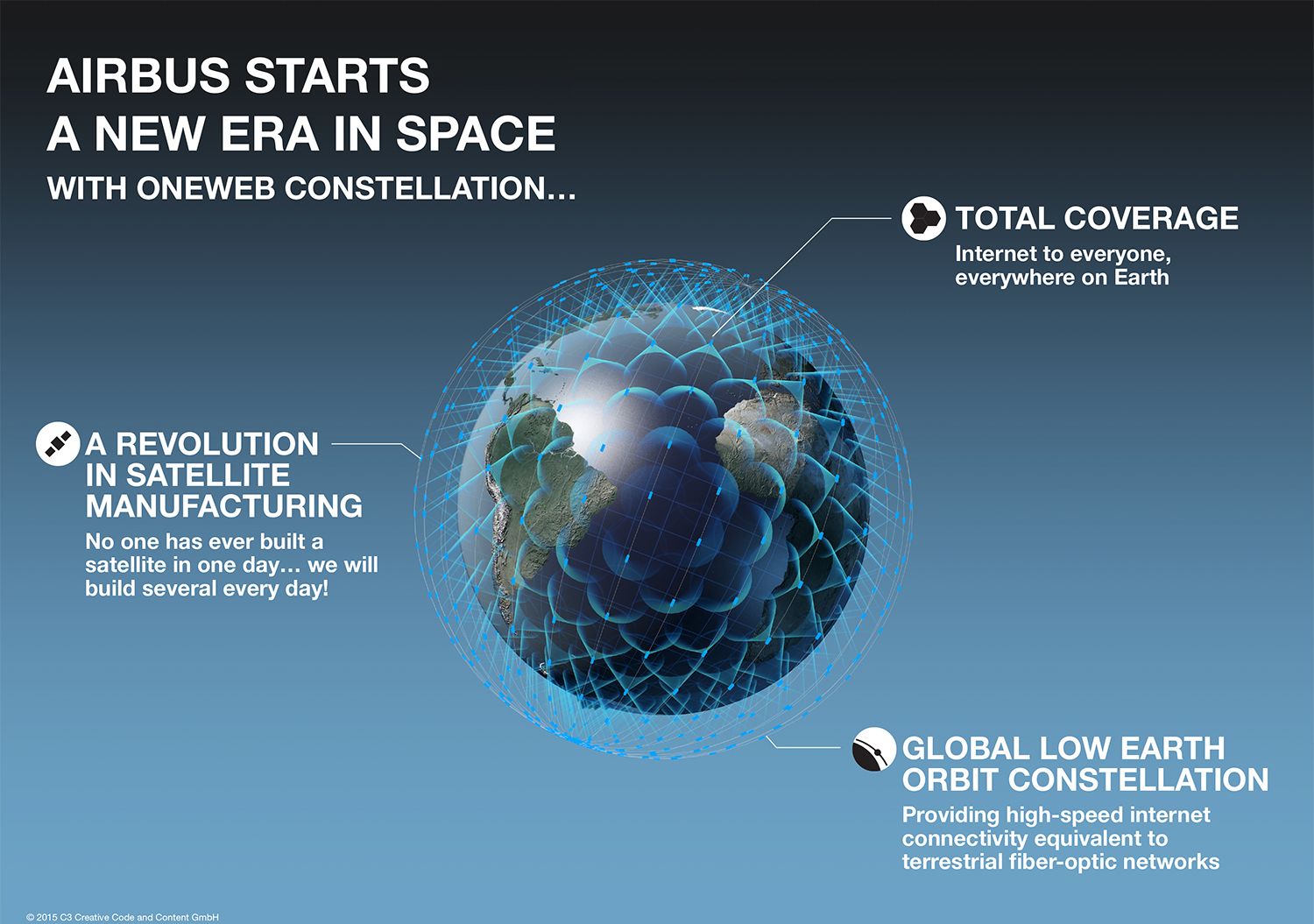 Each of these small satellites will weigh less than 150kg and have fewer electrical connections between systems compared with a standard satellite. The smaller and more agile telecoms equipment could also significantly lower the cost in large volumes for high performance space applications.

In January, Airbus was also awarded a deal from the Defense Advanced Research Projects (DARPA) to develop a satellite bus based on the OneWeb platform as part of its Blackjack programme. The contract puts Airbus and OneWeb as the partners of choice to produce the commercial satellite buses that will be paired with military sensors and payloads.

The Blackjack programme aims to demonstrate the crucial elements and importance of a high-speed network in LEO, which could enable the US Department of Defense to have highly connected, resilient, and persistent global coverage.

This major contract was followed by the successful launch of six OneWeb satellites on 27 February 2019 from Kourou in French Guiana. The satellites separated from the rocket in two batches and signals for all six were confirmed. The launch demonstrated the pivotal transition from proof-of-concept to the start of the deployment of the unique programme.

In the last quarter of 2019, OneWeb will begin a monthly launch programme that will see over 30 satellites per rocket sent into space. The first models are being manufactured at OneWeb Satellites’s facility at the Airbus Toulouse site, but full series production will take place at the OneWeb Satellites new factory in Florida.