Global paints and coatings company, AkzoNobel has today officially unveiled what it describes as the "world’s most advanced and sustainable paint factory”, in Ashington, North East England.

The Northumberland plant, which cost more than £100m to build, is reportedly the largest ever global investment by the decorative paints business and is set to become the new centre of production for major UK paint brand, Dulux.

The factory will be capable of doubling current UK production levels to 200 million litres per year, the equivalent of 80 million 2.5 litre cans of Dulux, in up to 33,000 different colours –  approximately enough paint to redecorate every living room, bathroom and kitchen in the UK.

The Ashington plant uses a variety of renewable energy sources, including photovoltaic (PV) cells and a biomass boiler, alongside an automated manufacturing process which saves water, waste and energy.

AkzoNobel estimates that the carbon footprint per litre of paint produced at Ashington will be reduced by 50% compared to the facilities it is replacing.

The plant secures 150 skilled jobs in high-tech manufacturing for the North East while supporting more than 100 additional roles in the local supply chain. Covering an area of 100,000 sqm, the factory also has capacity to expand in order to support future growth plans.

All manufacturing technologies within the plant are managed by a single integrated computer system. All key processes, from the ordering of raw materials to the shipping of finished products, can be initiated without operator intervention. A highly agile production system means the plant is capable of producing paint across the entire AkzoNobel range, which includes Dulux, Dulux Trade, Cuprinol, Polycell, Hammerite and Armstead.

The UK is a “vital strategic market” for the Dutch multinational, according to its CEO, Thierry Vanlancker, who described the significant investment as “an important milestone” for the business.

Head of Manufacturing at Ashington, Jeff Hope added: “Ashington has taken the best technology available globally, improved on it and put it all under one roof. It represents a significant step forward for the whole industry.

“I could not be more proud of the opportunity we were given to build this site in the beautiful county of Northumberland, and the loyal, committed and hardworking team who successfully delivered this incredible project.”

Secretary of State for International Trade Dr Liam Fox commented: “As an international economic department we encouraged AkzoNobel to choose Northumberland because the UK has the right skills base, infrastructure and supply chains to grow their business.

“Their decision is a vote of confidence in the Northern Powerhouse as a destination for foreign investment, and demonstrates the rock-solid relationship between the Dutch and UK economies.”

Ashington will house the second Dulux Academy, a customised training centre for painters and decorators to provide them with the expertise and know-how they need for business success. This follows the success of the first £1.4m Academy in Slough which has trained 1,600 people in its first year.

AkzoNobel’s ambition is to train and upskill 10,000 UK decorators by 2020, in order to play a part in tackling the skills shortage in the construction sector, which risks limiting the UK’s house building capacity. 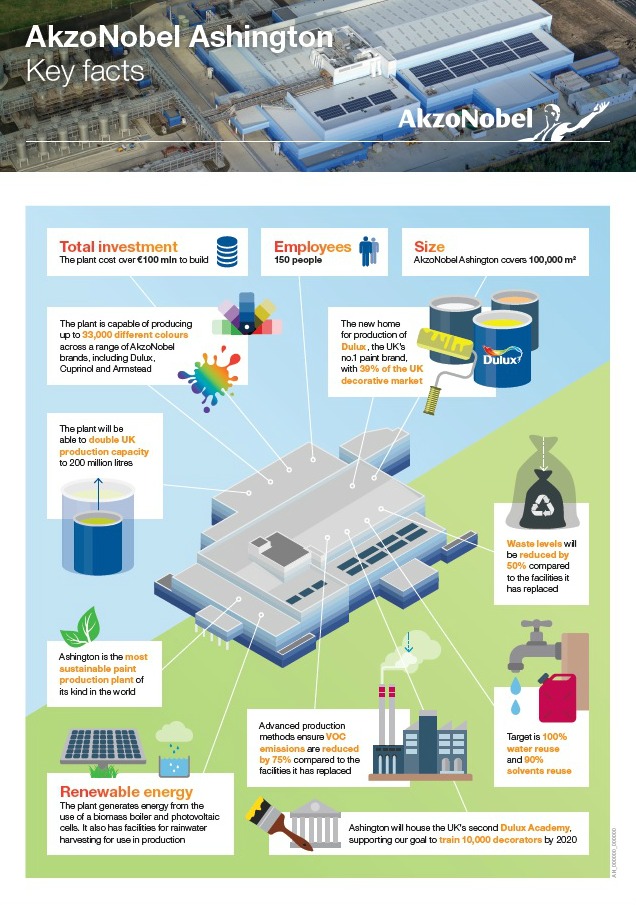 Ashington is AkzoNobel’s second major investment in the North East, alongside its Performance Coatings plant at Felling, Gateshead, which employs more than 800 people, out of a total UK workforce of more than 3,500.

Earlier this year, AkzoNobel announced an investment of £12.5m in a technical innovation hub at its Protective Coatings global HQ in Felling in Tyne and Wear. The new state-of-the-art R&D facility is expected to enable more than 100 scientists to develop products in conditions equivalent to the world’s most extreme environments.