The 2016 Annual Manufacturing Report (AMR), published by Hennik Research, demonstrates once again the resilience of British manufacturing, despite facing domestic and international challenges.

The steel industry has shrunk by around 9% this year and closures have hit the headlines, but manufacturers are, broadly, confident about the future. The survey this year found the second-highest positive outlook since the Report began, in 2008.

For the first time this year, the Annual Manufacturing Report asked about the Internet of Things (IoT). The response indicates that manufacturers are yet to be convinced and are adopting a ‘wait and see’ attitude.

Manufacturers are hugely concerned about the ‘suitability for work’ of young school and Further Education (FE) College leavers. The responses are even worse this year than previously: approaching three-quarters (73%) of respondents said that 16-year old school leavers were either “poorly” or “very poorly” prepared for work, and even more (77%) reported that 17/18-year-olds were. 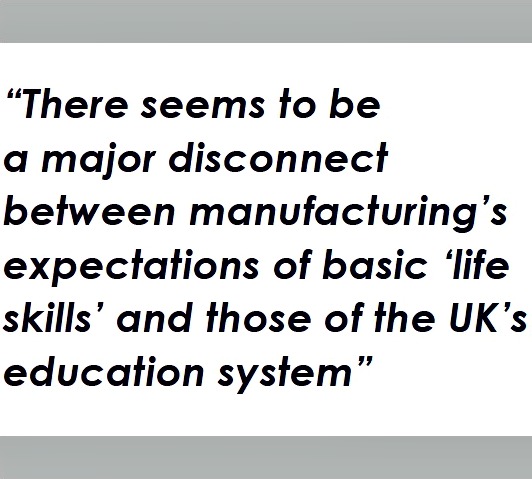 This is not an indictment of the youngsters themselves; manufacturers continue to make clear that they will invest in their recruits, with widespread commitment to apprenticeships and in-work training, both accredited and informal.

It does make clear, however, that something is wrong with the education system. It is simply not delivering youngsters with the basic skills, attitude and preparation for the world of work. There seems to be a very serious disconnect between schools (in particular) and business and industry. The country’s long-term economic future depends on repairing and improving that relationship.

The list of “hard to find” skills is headed by Technical and Practical skills (61%), followed by Engineering and Automation (53%). Written Communication (49%) came third, just ahead of Planning & Organisational and Problem Solving skills in fourth (47% each).

The list of strategies for attracting and retaining staff was led by ‘softer’ incentives, ahead of the ‘hard’ one of paying more money. Further Training/Development tops the list (67%), followed by Increased Management/Leadership Training (47%) and Flexible Working Hours (39%), which was just ahead of Offered Higher Pay or More Incentives (37%).

Nearly two-thirds of those surveyed believe that not enough is being done to make manufacturing an attractive career choice.

85% of UK manufacturers are either “very” or “quite optimistic” about the British economy over the coming 12 to 36 months, which is the second-highest figure we have ever recorded. Slightly more – 86% – maintain that the economy generally is being managed “exceptionally well”, “moderately well” or just “well”.

Confidence in government policy is a little lower when it comes to manufacturing in particular: 70% say that it is doing well (4% “exceptionally”, 12% “very” and 54% “moderately”); with the remaining 30% less enthusiastic, including 10% who reckon the Government is doing “exceptionally poorly”.

While fewer companies overall this year maintain that manufacturers in other countries get more state support than those in the UK, the list of those that do is headed by our two closest competitors: Germany (76%) and France (70%). 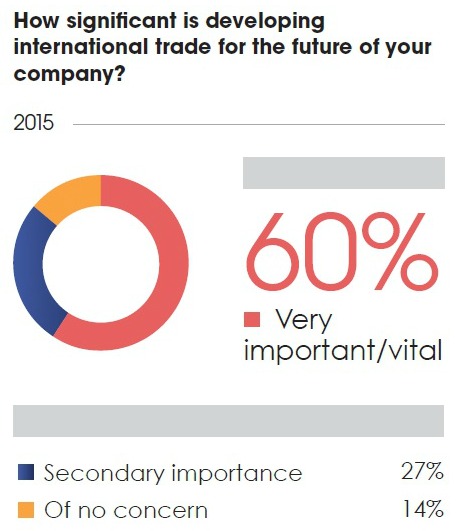 The two countries that have slipped back noticeably this year are China (down from 57% to 46%) and Russia (14% now, compared with 30% last year). Italy and India are now believed to provide more state support to their manufacturers than the United States.

This may be a reflection of where respondents are now doing business, given the rise of Indian enterprises and the introduction of sanctions against Russia. International trade was recognised as “important” by the overwhelming majority, but the number saying it is of “secondary importance” rose to 27%.

While the majority of respondents believe that important competitor countries get more support than do UK manufacturers, those who have had contact with government agencies have generally reported good experiences.

UK Trade and Investment (UKTI) heads the list, with positive votes outweighing negatives by six to one. Local Enterprise Partnerships and SEMTA (Science, Engineering, Manufacturing Technologies skills council) has work to do to convince UK manufacturers of their value.

Bureaucracy, regulation and ‘red tape’ obstructs or influences business decisions, according to 79%, and the regulatory climate is believed to encourage a ‘risk-averse’ approach by just over half (53%).

Nearly 90% felt that trade and professional associations, rather than government regulation, could have a positive role to play in compliance.

Productivity is a continuing concern for the country as a whole. Automation helps manufacturing to improve productivity and competitiveness and the evidence is that companies are investing in it, at reasonably high levels; A little under half of respondents said that they are in the process of implementing a major project and 21% said that they last did so in 2014.

This means that just under two-thirds of UK manufacturing businesses committed to major automation projects in the past two years.

A comfortable majority (60%) of respondents said that working conditions and job satisfaction had improved as a result of their most recent automation project. Approaching half (44%) said that jobs had been preserved and nearly one-fifth (18%) reported that new jobs had been created.

Manufacturers appear to have taken advantage of the higher level of Annual Investment Allowance (AIA – £500,000 from April 2014 to end of 2015). We have seen a significant rise in expenditure on automation for production processes in the range up to £50,000. 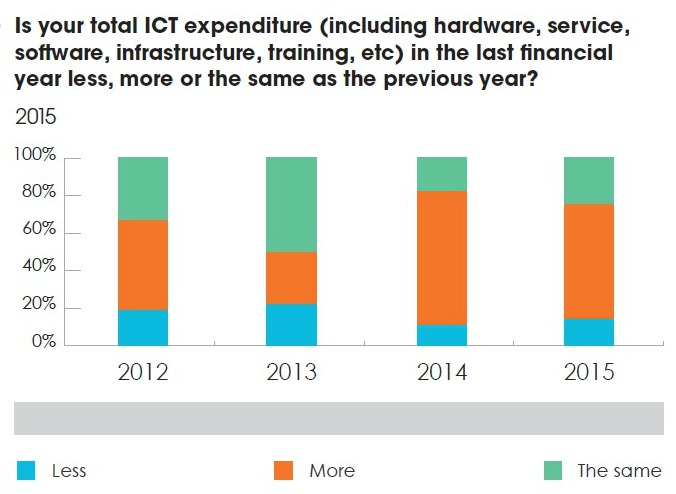 Expenditure on ICT continues on an upward trend; 61% said they are spending more this year than last, which is the second-highest level we have ever recorded.

Slightly less than half (48%) of respondents said that they expect to spend more in the coming 12 months.

However, the pattern we have seen over the past four years is that actual investment in ICT is higher than expected.

Overwhelmingly, the investment in ICT is strategic, with 64% saying that it is part of a company-wide strategy and only 10% describing it as “responsive rather than Pro-Active”.

ERP (Enterprise Resource Planning) systems have been given top priority by the highest number of companies this year (25%), followed by Upgrading IT Infrastructure (16%) and Manufacturing Execution Systems (11%). Customer Relationship Management (CRM) systems are slightly down, at 9% and Supply Chain Management has ticked a little upwards, at 7%. Ongoing investment remains strong in Planning and scheduling operational processes (50%); Analytics and Reporting (48%); and Product Design and development (39%). SCM, CRM and Financial Management also received strong support.

For the first time this year, we asked about the Internet of Things (IoT). It is a topic that has been mentioned widely, but it does not yet appear to figure strongly in manufacturing.

Sixteen per cent of respondents said they had never heard of it; only a quarter currently intend to something about it. A little under half (42%) are currently unsure what they are going to do and a third (33%) have no plans to introduce IoT to their businesses.

Of the one-quarter who are actively investigating IoT, the issues driving the investigation were led (in their own words) by ‘connection’ and “connectivity”, followed by “business intelligence”, “tracking” and “control”.

Those saying that their ICT projects are aimed at improving existing processes and ways of working totalled 80%. The list of specific challenges is once again topped by “productivity improvement” (51%). Price competitiveness has leaped forward into second place (44%). 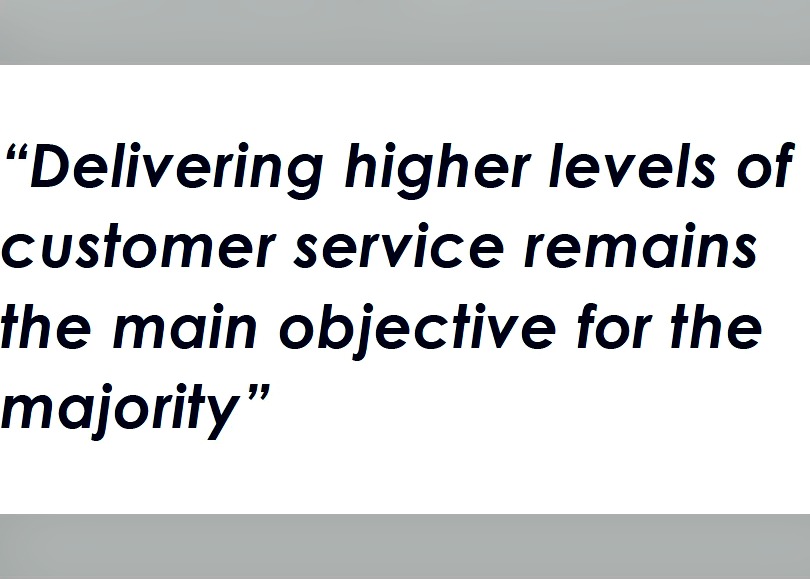 The number mentioning a more geographically dispersed customer base (18%) reflects anecdotal and other reports.

With China’s rate of growth slowing and the sanctions on Russia having their effect, UK manufacturing has to look further afield to new markets to sustain and grow.

Ten per cent mentioned “offshoring manufacturing functions”, the highest level we have recorded in the four years we have been asking this question.

Investment in ICT has, generally, led to improvements in performance; 98% said that productivity improved either moderately or a lot. Competitiveness/efficiency has also strengthened; customer satisfaction is up a little, to 86%. But the big gainer looks like profitability; 86% of respondents said that it had improved.

Bottom of the heap, with 42% reporting “no improvement”, is energy/resource efficiency.

The biggest barrier to investment remains cost, which was mentioned by more than half of respondents. 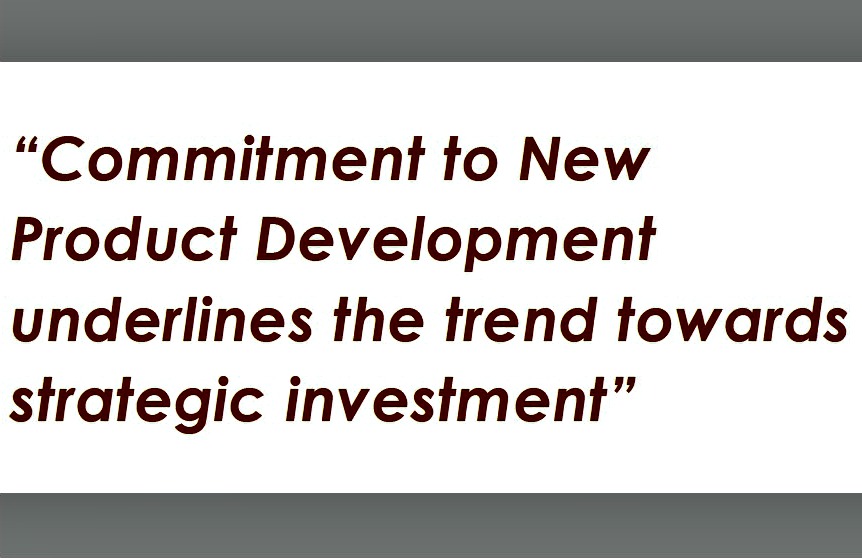 Almost a third of survey respondents said that the majority of their capital investment projects are “strategic”. Barclays Bank, which sponsored this section, described this as “encouraging as it represents clear commitment to the future as well as a desire to place innovation at the heart of their businesses”.

Access to funds has been improving over the past 12 months, with an increase in the number of respondents deeming the access to be “very much easier”. The level of satisfaction with banks’ commercial funding operations seems to be continuing its recovery, with more respondents indicating they are “very satisfied”.

Cost control continues to be the major concern, followed by increasing cash flow, which more respondents (38%) mentioned this year than 12 months ago (24%). Raising money for investment is the third-placed concern; it was mentioned by just over one in 10, well down from last year’s 18%.

A total of 43% of respondents said that more than half of their investment is strategic, rather than replacement. Less than 10% said that they were not making any strategic investment at all at the moment.

New Product Development features quite strongly in the £50,000 and above responses. IT/Computer systems, both hardware and software, feature strongly in the up to £50,000 levels. Facilities upgrade for H&S and regulatory compliance, and handling and storage equipment lead the field in the sub-£10,000 category.

More than half of respondents to look to their own resources to finance capital investment, but more traditional bank funding appears to be making a comeback. The use of overdrafts (32%) has recovered from last year’s 20% level. Asset Finance stands at about the same and HP/leasing came in at 26%.

Manufacturers seem to be getting better at planning, managing and measuring financial performance. The companies who said that they can achieve full financial ROI (return on Investment) quantification is, at 28%, the highest recorded level since 2009.

The quality of assessment can be perceived to have risen since then, with increased and wider adoption of relevant ISO standards.

Marketing enjoyed the biggest increase in spending; “social” and “HR Perks” continued their trend of reduction.

This is a brand new section for the Annual Manufacturing Report. Our intention is to gauge the importance of servitization, whether it is spreading, its impact, and growth. 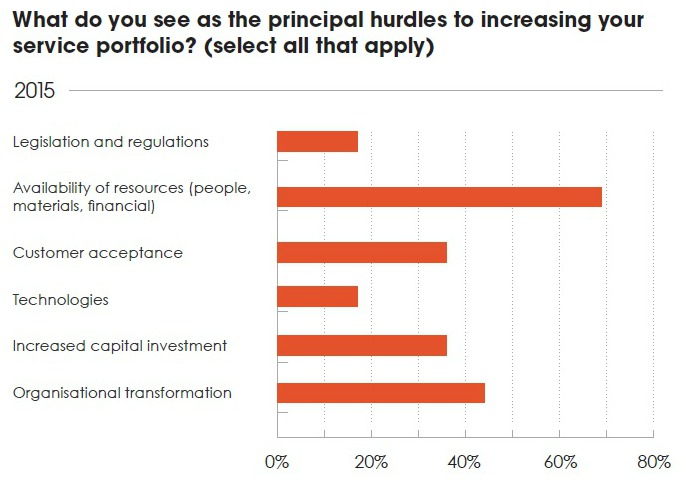 Areas that are at least the germs of servitization, if not core competencies, are currently in the minority, but their levels already look significant. Of these, the strongest is customer support agreements, with 41% mentioning them. Availability contracts are offered by nearly a fifth (17%) of respondents and ‘pay for use’ agreements by almost one in eight (12%). Outcome contracts bring up the rear, being mentioned by 9%.

The lead reason, by far, for offering servitization was identified as “closer relationships with customers”, which was selected by 74%. Approaching half (46%) look for improved profitability through the provision of added-value services, just ahead of the closely-related reason of increased revenue (44%).

The biggest obstruction to increased provision of services is the availability of resources, human as well as financial, (69%). The need for increased capital investment was mentioned by 36%.

Servitization is a new area and is in the process of development. We expect to see some significant changes in the years to come.