An insight into one aero-suppliers’ impressive business transformation

A management buy-out has paid dividends for precision engineering company, Produmax, with revenue almost trebling, staff growth of more than 600% and exports now accounting for 70% of turnover.

The Shipley-based manufacturer has become globally known for its expertise in producing high-quality machined flight control components and assemblies, supplying some of the most prestigious aerospace manufacturers worldwide – including Boeing and Bombadier.

The company’s business transformation into an £8.5m international company follows an MBO in 1998 led by current managing director Jeremy Ridyard.

At the time, Produmax had a £3m turnover, employed just 12 people and had no export contracts. Today, the award-winning business employs a 75-strong team, has truly embraced a ‘one team’ culture, and has incorporated cutting-edge automation into its high-tech production facilities.

Over the past five years, the company has undergone a government-backed £1.2m SiG (Sharing in Growth) transformation programme, helping it to increase output, improve performance and reduce downtime.

Since joining the SiG programme in 2014, Produmax has improved productivity by almost 40%, won three new customers and increased turnover by 55%.

Alongside creating a farsighted strategy and delivering operational performance in line with world-class practices, the business has also consolidated two older factories, including a Victorian tannery, into one new larger purpose-built plant which was fully-configured by the employees.

Produmax recently opened an additional £3.1m facility at its Baildon headquarters to accommodate its increased workload and allow for further expansion. The company now exports its products to the Philippines, Morocco, Japan, Canada and North America, as well as parts of Europe. 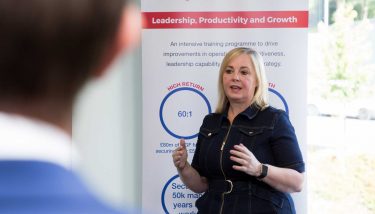 Finance director, Mandy Ridyard explains: “Soon after our MBO, we won a major contract from China and it was this export opportunity which drove our mission to improve productivity.

“Since then, Produmax has undergone a huge business transformation which not only has technology at its core, but also culture – it is our world-class employee engagement which has been vital to us becoming competitive internationally.”

To achieve their ambition of surpassing £10m in turnover by 2020, management’s vision is for every employee to become an ‘engineering superhero’, solving problems, gaining skills and working more efficiently.

Regional manufacturers have the chance to gain a deeper insight into Produmax’s business transformation at the upcoming ExportExchange ‘Live’ event, co-organised with Make UK, on Tuesday 17 September.

Alongside a tour of Produmax’s purpose-built, high tech factory in Baildon (Shipley), the event will also include presentations by Mike Maddock, managing director of Performance Engineered Solutions (PES) and visiting professor to The University of Sheffield, and Keith Jackson, CEO of Brandon Medical.

The ExportExchange.co.uk initiative was launched in 2017 and brings together experts in overseas trade within firms from the Leeds City Region to share their exporting knowledge with interested parties.