Apprentices forecast to contribute £3.4bn to UK by 2022

Apprenticeship completions over the next decade are forecast to contribute £3.4 billion a year to the economy through productivity gains by 2022, according to a new report from the Centre for Economics and Business Research.

The report, ‘Productivity Matters: The impact of Apprenticeships on the UK economy’, was released this week to coincide with National Apprenticeship week.

It says that between 2012-13 and 2021-22, 3.8 million people will complete an Apprenticeship although presently the report says that only 100,000 businesses currently offer apprenticeship places.

The Manufacturer estimates the number of new apprenticeship places offered per year will need to increase by approximately a further 100,000 to 350,000 to successfully achieve 3.8 million completions by 2022.

Taking the anticipated growth in apprenticeship completion and the estimated value added by an apprentice, the report estimates that apprentices will contribute £3.4bn to the UK economy a year in productivity gains by 2022.

The report also said that in 2012/13, gaining an Apprenticeship raised an employee’s gross productivity by £214 per week on average. This varies by sector with worker productivity contributing £414 in engineering and manufacturing and £114 in healthcare, public services & care.

The improvement in productivity was largely calculated based on the lower wages costs for graduate apprentices when compared to the wages of experienced workers. The report did not present great detail to compare the quality of work and efficiency differences between the the two types of workers. 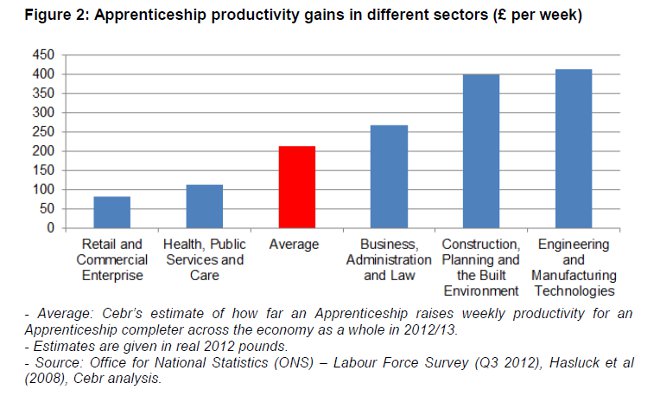