Are smart data factories a realistic proposition for the UK?

Posted on 9 Jun 2017 by Jonny Williamson

The future of manufacturing appears to be awash with talk of cyberphysical systems, machine-to-machine learning, cognitive robotics and intelligent systems, but is the ‘smart connected factory’ concept relevant to the mainstream?

Digital technologies and automation aren’t new concepts to manufacturers; many businesses have been successfully using them for decades. Equally, data collection has been a part of many organisations remit for years (though arguably, they may not be so familiar with analytics and reporting).

What’s new is the high-level of intelligence these disparate systems display, combined with the increasing rate of connectivity between them all.  Due to the prior knowledge and experience of manufacturers, they are among the best placed to take advantage of this new wave of technology – indeed, many are, some without even being aware of it.

The site has seven manufacturing lines producing more than 42 million cases of drinks every year. With a fill-rate of 5,000 bottles and cans every minute – over 80 every second, it’s no wonder the business has a pro-active approach to automation and technology.

“We are probably migrating towards a connected factory or a digital data factory, whatever you want to call it, almost without thinking about it. As we evolve, data is becoming increasingly important to the business and the decision me and my team take – both in the short term and further ahead.

“We have a line management system which doesn’t solely offer an instantaneous snap-shot of what the factory is doing, it also allows us to benchmark ourselves against our own previous performance and that of others in the CCEP group.

“Alongside several other systems, we also utilise a remotely-accessible, advanced inventory management system which maintains and manages our stock levels. The ultimate evolution will be to have each of these systems interconnected and talking to each, rather than siloed – albeit effectively managed.”

At the root of this evolution is the growing importance of data, and the role it does – and will – play. CCEP Sidcup has access to more data than ever before, however the challenge lies in determining what is useful and what is surplus.

Deciding information is surplus isn’t the end of the story either, as that data also needs determining whether it can be discarded completely or archived for some future use.

Stacey noted: “I’m often presented with a lot of data, but drawing conclusions from it isn’t easy because there’s just too much of it and it’s a struggle to zero in on what’s important. It’s a combination of having all the data in front of you, but not necessarily understanding how it’s going to be used and having the people with the required skill to interpret it.”

So, how is CCEP Sidcup using the data it collects to drive better decision-making and higher productivity. You need look no further than its use of variation analysis to drive process efficiency.

Production managers, for example, can see the site’s day-to-day filling line efficiency. Managers won’t react on a day when efficiency dips, they are more focused on looking at overall trends and understanding why those occasional dips are occurring.

Variation analysis allows them to go back and look over the number of instances in a certain time-period to explore whether the business understands what and why those dips have happened, and whether it requires a certain level of time, energy and potential cost into rectifying, or was a one-off event and unlikely to happen again.

Stacey added: “We’re using this kind of process and critical thinking to avoid making knee-jerk reactions day-to-day as to what failed yesterday. Instead, we’re looking to see whether events are happening on a regular frequency and becoming an endemic issue. The start-point for making those decisions is looking at data.

“We are trying to become smarter about how we use data, linked to variation analysis and instantons response, to move from reactive to preventative to predictive.” 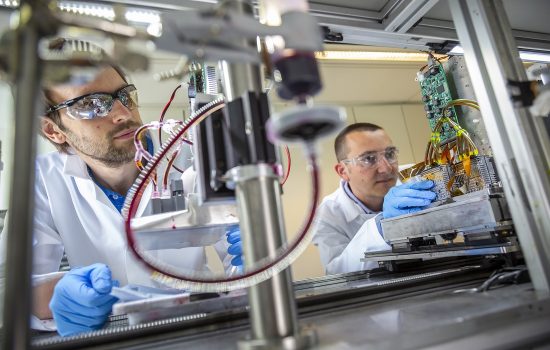 The role of inkjet printing in the smart factory