In the third of a five-part weekly series, The Manufacturer talks exclusively with Autodesk’s senior director for industry strategy and marketing for manufacturing, Grant Rochelle about the challenges and opportunities industry faces, both now and in the future.

The Manufacturer (TM): How does Autodesk see the manufacturing landscape changing over the next three to five years?

Grant Rochelle (GR): Three big shifts have the potential to turn the industry on its ear. The opportunity is there for discrete manufacturers to get on this early, use it to advance their own positon in the market and be successful, and I think that they ignore it at their peril over time. This is serious, this isn’t a fad. This isn’t just Autodesk trying to talk about trendy things.

Number one, the changing landscape of how things get made, and there are two parts to that – the first centres on doing things today with new materials and types of processes (such as additive and subjective manufacturing) that just weren’t possible before. You can either design a part you never could or you can make a part in a way you never could before.

The second is the way an idea can reach market now is completely different to how it was even just a couple of years ago. If I have a good idea today, I can go online tomorrow to a site such as Kickstarter, build a proposal, put it out there and get it funded. Then I could use a crowdsourcing platform to work with really smart people that I would never normally get to meet and get my idea designed. Then I can find a flexible manufacturing facility somewhere and get it made and disrupt some of the businesses that have been doing things the same old way for the past three decades.

Number two is really how customer demand is different now, with increased expectations I think than ever before revolving around more configurability and customisation. I think there’s an opportunity for manufacturers to do business differently with both potential and current customers to build that relationship out over a longer period of time and win repeat business, if handled successfully.

Number three is the products themselves, which have the potential to be much more intelligent, connected and communicate with other products, the environment, people and software.

TM: What do you see as the potential for manufacturers in the short term?

GR: The short term recipe for success is to build a strong foundation focused on better efficiency in sales engineering; on quality and warranty costs which would involve running more simulations upfront and early to really test out ideas before putting them to production and getting them out in the market; and get data under control. Until that happens you can’t reuse or recycle data and you will always be in the business of designing and building something again that you did a few years ago, but you can’t find it.

It’s probably going to be a wrestling match for the next couple of years as manufacturers try and understand what the benefit will be to their business of looking at these things, but I think Autodesk is in a really good positon to help them through that process because we’ve investing a lot over the past several years, especially on the materials, simulations and production/manufacturing side.

In terms of how prepared and willing UK manufacturers are to embrace these sorts of disruptive technologies, from what I’ve seen the UK continues to make big investments in design, technology and manufacturing. In fact I think the US could probably learn a bit from some of the investments the UK Government has been making over the past few years.

For 3D printing, I would say a lot of that talk is largely consumer-oriented. Our interest is in industrial scale, but I think the biggest problem today is the fact that 3D printing for the most part is a pain, it’s just too hard. Today’s 3D printing success rates are probably around 25%, so 2.5 times out of 10 you will get a successful print, once the digital design has been completed. I mean that’s crazy.

That’s why we made the decision that somebody needed to do something to try and accelerate development in this area, because otherwise it runs the risk of stagnating. The idea behind the Spark platform, the Ember printer and the Spark Investment Fund is to get this stuff out there and have people to crowd source it, essentially.

By making both the software architecture, the Spark platform, and also the printer with all of its designs freely available, we are basically saying have at it, learn from us because we’ve done a reference implementation, if you use Autodesk tools, leverage the platform and send it to the Ember printer, you’re going to get a good result. Now we are opening it up to other software vendors, 3D printer manufacturers and our desire is that everybody learns from our experience and make it better.

TM: Do you think industry has the skills in place to embrace this technology and make adequate use of it?

GR: That’s an issue that is probably going to take longer to solve. We’ve made the big first step by deciding that working with education should not be a revenue-generating business for us; so we’re taking that off the table.

The next big step is guiding the institutions as to how they can develop good curriculum so they can take advantage of that step. There are two parts that I would call out as needing a lot more attention. The area of materials science and manufacturing process is still pretty new, so we’re going to have to figure out together with educators how to bring that into the curriculum.

The other part is what we refer to as cyber-design, but others call systems engineering. The idea of how do you bring together all of the different disciplines between mechanical, electrical, electronic, embedded software, sensors and so on. Nobody has solved that problem today, so that’s an area that we want to focus on. 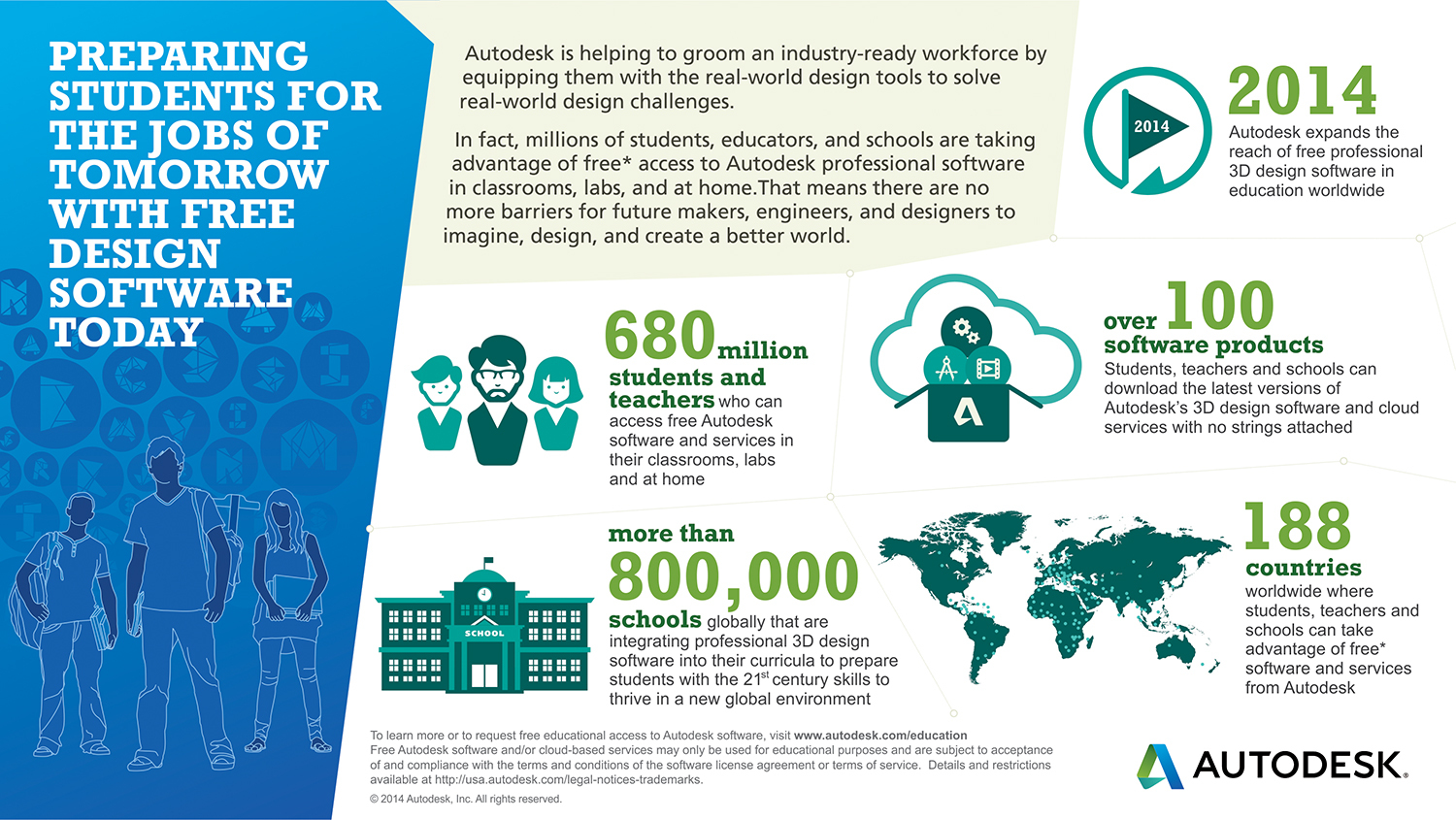 TM: Where do you think that solution lies?

GR: Possibly from a technology point of view, but broadly speaking, I don’t think there isn’t a lot of focus today in mechatronics or whatever you want to call it, which is a broader skillset than classic mechanical engineering, electronics etc.

I think we still tend to think in siloed disciplines and though they are still very valuable and everybody is still going to need to do those jobs, there needs to be more people who have the capability and the skillset to being together that data and do the early planning that says this is what cyber design should look like and now we’ll go off and build all the pieces to make it work.

TM: How does Autodesk see the Internet of Things (IoT) advancing in the immediate future?

GR: We see the IoT breaking down as the idea of connectivity being more than just about a product, so we think it’s as important to be thinking about the connection with people. Essentially there are three pieces to it; one is that there is real product innovation or revolution happening, there’s a platform revolution, so how you can engage with people and get good ideas built, and there’s a process revolution, which is all about the manufacturing and the materials side.

IoT is a buzz word I think, it will go the way of other buzz words. What is really important is the underlying principle, that of building intelligent things that are able to communicate with multiple other things, whether that’s people, software or other things. For us, we want to be in the business of helping manufacturers develop the really smart cyber ‘thing’, which is not trivial because that is such as siloed activity right now and I think it’s going to be interesting to watch how we evolve that over the coming months and years.