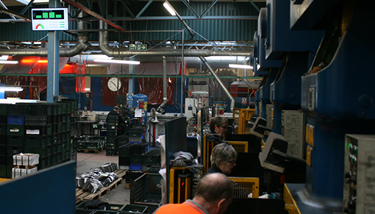 In 2016, Arlington Automotive’s continued growth meant that real-time performance data was a crucial requirement. As an agile company, it wanted to be able to react to real-time data regarding the performance of its machine presses, during each shift.

Arlington has a target press stroke per minute for each machine, but previously only captured this data the following day, this was often too late to have a direct effect on production rates.

Datawright implemented a solution to link Arlington’s K8 Manufacturing ERP system to two of its presses. Wi-Fi automation devices connected to a micro-switch in each press enabled the presses to become ‘Internet-connected things’. This allowed K8 Manufacturing Dashboards to display real-time performance data, updated every minute. A range of dashboard views were developed for both shop floor and back office monitoring.

Garry Luke, systems engineer, Arlington Automotive explained: “Before the IoT project, we had ‘gut-feelings’ about teams of operatives being more efficient at certain types of operations than others on certain presses, however there was no reliable performance data to substantiate this.

You can read more on the Arlington Automotive story here.

“The data provided has enabled us to optimise shifts. Following the initial project on just two presses, parts per machine have increased substantially and we have been able to see a 16% gain in productivity”.

Datawright has a long and proven record of delivering effective IT problem-solving solutions and value to customers. The Arlington IoT project is a great example of this. The project has since received recognition from the European IT & Software Excellence Awards 2017, being nominated in three categories.