Back to School: Thetford school signs up manufacturing governor

The Thetford Academy in Norfolk has begun the process to appoint Will Bridgman, managing director of engineering company Warren Services, as a school governor.

The Thetford Academy was opened in September 2010 and is the beneficiary of a recent multi-million pound rebuild. It was formed by the merger two failing schools, Charles Burrell and Rosemary Musker high schools. This September, the refurbishment and new buildings will bring its capacity to 2,050 pupils, up from 1,400.

“The school has difficulties but the current principal and her staff are working extremely hard to pull it around.” – Richard Bridgman, Warren Services.

The academy has challenges. School regulator Ofsted gave the school an unfavourable report in March following a visit in February, singling out poor standards in science, physical education and design & technology, and low pupil attendance. The principal Cathy Spillane was disappointed by the report and is working hard to improve academic and behavioural standards at the school which now boasts greatly improved facilities. 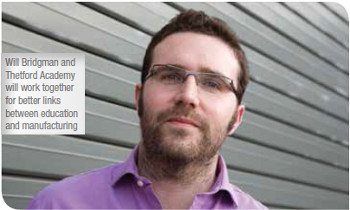 Local businessman Richard Bridgman has long been a crusader for better standards of training in manufacturing companies and for showing young people the opportunities in engineering careers. He and son Will, managing director of local engineering firm Warren Services, began a dialogue with the Thetford Academy nearly two years ago about providing support for the school.

Richard, chair of Semta East England, the manufacturing sector skills council, met with Mrs Spillane on May 23 to discuss Will’s appointment as a governor. The thorough approval process was explained and, pending unforeseen delays, he will be appointed a governor by September. The Bridgmans’ plan is to link children at the school with their own training centre.

“The academy is keen to work with Warren Services and supports the opening of our own Bridge Training Centre which starts in September 2014,” says Bridgman senior. “This facility will be a non-profit Community Interest Company and we will work with Semta under their SAS programme to deliver training to our own apprentices as well as other companies in Thetford and the region.”

Working with the academy, the Bridgmans hope to be able to offer work experience, deliver new traineeships and all other relevant training, taking into account the change in the school leaving age, to 17-years, which comes into effect in September. “We are committed as a family and company to increase the opportunities for youngsters in Thetford and would also like to encourage more females to enter the world of manufacturing,” says Bridgman senior.

The Thetford Academy does not have a manufacturing leader on the governing board at present. As a school with a below average Ofsted ranking, and needing more help specifically in its science and CDT departments, it is a prime candidate for a governor like Mr Bridgman. “The school has difficulties but the current principal and her staff are working extremely hard to pull it around,” says Bridgman senior. “I have worked with them over the last couple of years and I truly believe, given time, the principal will make it a success. But government and local authorities are always looking for a quick fix. We need to lift the aspirations of the students in Thetford and help them reach their full potential.”