How do supply chain managers really know where their deliveries come from? Is there a way to track and trace a product’s journey with 100% confidence? Helen Saunders discusses the supply chain security opportunities provided by blockchain.

Supply chain security is rising up the boardroom agenda among global manufacturers, as incidences of theft, fraud and counterfeiting and even infiltration by cyber-attackers become more frequent, more widespread and increasingly newsworthy.

And the cost is staggering. Businesses lose an estimated $22.6bn globally each year due to cargo theft, and the price paid by manufacturers impacted by other supply chain risks also adds up.

The horsemeat scandal of 2013, which saw major retail brands and manufacturers forced to withdraw millions of meat-based products after supply chain fraud was discovered, wiped a reported £300m off the share price of one major brand.

While in 2016, a China-based manufacturer recalled some of its products sold in the US after security researchers identified it had made parts for devices that were targeted in a major IoT global hacking attack credited with a widespread takedown of the internet.

It’s no surprise therefore that manufacturers are looking for reassurance that each item used on their production lines has a genuine and traceable provenance, and that products dispatched for onward supply are not interfered with.

However, sourcing and then tracking of components is a hard-enough job in itself. What can supply chain managers do if their suppliers are unable or unwilling to provide a cast-iron audit trail?

Consumers, too, are demanding more and more information about the history of their purchases. IoT-based initiatives such as the Safety for Food platform, for which technology provider Cisco supplied the behind-the-scenes connectivity for its customer Barilla Pasta, have made progress in providing this visibility. 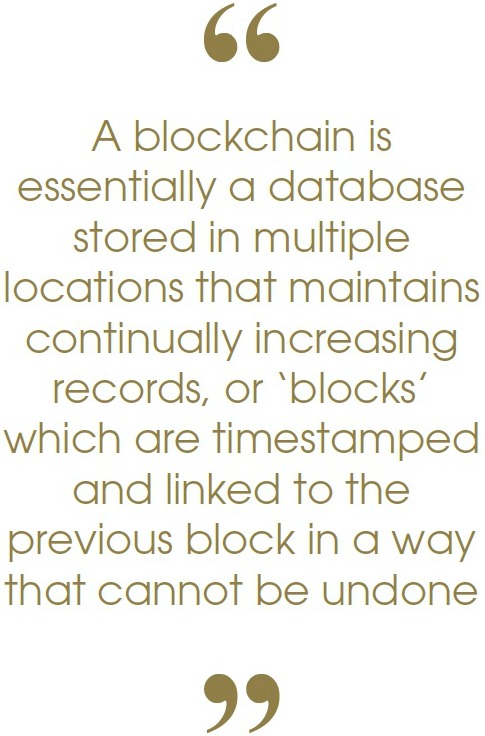 In this example, purchasers can scan a QR code on packaging to access details on the production batch and supply chain journey. Yet this level of detail is not routinely available.

Enter, the world of blockchain. In theory, at least, blockchain provides a panacea to the recognised headache of supply chain security. Not only does it have the potential to track product journeys to the most granular level, providing visibility to all who need it, but also it offers opportunities to automate many largely manual processes, reducing the administrative bill into the bargain.

But just how would blockchain work in practice across the supply chain, and what are the benefits, and the pitfalls?

A blockchain is essentially a database stored in multiple locations that maintains continually increasing records, or ‘blocks’ which are timestamped and linked to the previous block in a way that cannot be undone.

In the context of the supply chain, goods would be registered on a global ledger as transactions, with pertinent information such as the cost, geographic location and date, as well as the parties involved in production and transportation.

This information would be available securely to verified supply chain partners. It, or a version of it, could even be made available to the general public where the appetite to understand the exact history of goods is present – for example, where serious food allergies exist, or purchases are influenced by consumers’ religion or beliefs.

Current security efforts such as control towers and track-and-trace at shipment level offer limited protection from the determined efforts of pirates and counterfeiters who plague the global supply chain, despite the best efforts of suppliers and logistics providers.

And the burden of paperwork, despite moves to a global electronic customs standard, continues to be costly and complex to fulfil, with so many parties involved and varying levels of technology adoption.

A widely adopted blockchain model for supply chain would cut down on much of the paperwork and streamline the verification process.

The appeal of blockchain to the various legitimate players in the supply chain is clear. For the first time, each link would have a truly reliable way of ensuring goods received are exactly what they seem. With blockchain, the complete journey of goods and each pair of hands they passed through, each facility they were stored in and each vehicle they were transported in will be recorded.

Not only will the provenance of goods be assured, with blockchain providing a solid audit trail, but analysis of the supply chain to identify efficiency and productivity improvements will finally be a worthwhile exercise. This explains why, according to recent research by Deloitte, 42% of executives in the consumer products and manufacturing industry, plan to invest $5m or more in blockchain technology in 2017.

Despite the obvious and very logical appeal of blockchain for the supply chain, there are a number of barriers to its widespread adoption. There have been many other technology-based solutions to improve supply chain security, including RFID at package or even item level, which could have driven improvements a decade ago, yet a piecemeal take-up has neutralised their effectiveness.

A lack of commonly accepted standards for blockchain development appears to be the key factor holding back progress. The Deloitte research also found that over half of respondents (56%) see implementation of a common technical standard as being the tipping point.

In January 2017, a consortium of industrial heavyweights including Cisco, Bosch and Bank of New York Mellon, began working with a number of start-ups and announced it is working on a protocol to facilitate just this for the supply chain.

Just how close are we to seeing blockchain deployed across the global supply chain?

There are a number of supply chain projects underway right now, including:

Blockchain certainly offers some exciting possibilities to fix some of the persistent security issues associated with the global supply chain, yet the technology alone will not wipe out the many risks associated with the industry. Apart from anything else, the complexity of transporting goods via multiple players and the returns for criminals are simply too great.

However, a standard, interoperable blockchain, particularly when combined with other technologies such as RFID does have the potential to make the global supply chain a much safer place to operate. A more secure supply chain will benefit businesses, in particular manufacturing businesses, their supplier and customers and ultimately consumers.