The year is 1997. It’s a dry, sunny day in the Black Rock Desert in Nevada, US where about

200 media representatives are gathered. In the middle of them is Richard Noble, one hand on his radio, the other shielding his eyes as he looks towards the horizon. 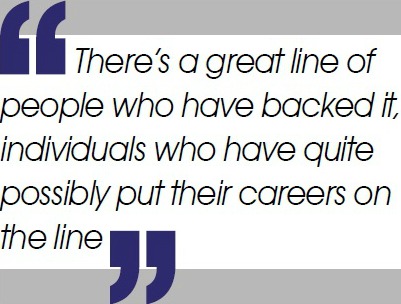 Silently, a small vehicle appears over the crest of the horizon, dwarfed in comparison to the vast, stretching desert. Noble smiles in anticipation.

In a matter of seconds the silent vehicle would pass the group, no longer silent, instead bringing with it two ear-shattering booms as the sound barrier tries in vain to keep up with the car and it’s pilot, Andy Green.

The journalists, not sure whether to try and follow the car as it continues on its journey across the flats as it smashes the land speed record, scribble down what they have just witnessed, or simply laugh in childlike excitement after experiencing what Noble can only describe as “an almost religious experience.”

This year, in late autumn, Noble and the Bloodhound SSC aim to replicate this achievement – only much, much faster.

“It’s really coming together,” Noble says, his enthusiasm clear as his speech quickens. “It’s a huge undertaking and there are so many different aspects you really need to keep your eye on all the time. But so far so good, we will be running the car this year.”

The pure objective of the Bloodhound project has been clear since its inception – break the 1,000mph mark.

However, many members of the Bloodhound team will say this is the secondary objective, with the education angle taking the driver’s seat since the project’s rocky start back in October, 2008, one month after Lehmann Brothers filed for bankruptcy.

Clearly this was not a time when businesses were going to be willingly handing out money for a project as crazy as Bloodhound SSC. From this day Noble knew his task as project director was going to be a monumental one throughout the entire lifespan of the project.

“It’s always difficult and it’s never comfortable [approaching businesses for money], but we’re moving ahead steadily and there’s a whole raft of people who want to come in and join,” he says.

“The fundamental thing is this is a project that is a one-off and its costs are very difficult to plan. We like to think we’ve got a pretty good handle on the financial planning, but something on this sort of scale, you only need to make a slight mistake somewhere and suddenly costs get out of hand and you’re held up for a month or more.

“We also can’t give anyone any kind of return on this kind of thing. We’re very lucky if we can just get through without having enormous debts.”

Currently the project is running on a build cost of close to £1m per month. The figure is large, and the return may be questionable to some. Noble is obviously not one of those people.

“Britain’s got this extraordinary culture which is totally and absolutely risk averse,” he says. For the first time in the conversation I can hear a tone in his voice which almost resembles frustration.

He continues, laughing as he does as if to stymie any negative incarnations into his response: “And of course if you live with a risk averse culture you never get anywhere because you never do anything new.”

Risk is a common theme that Noble deals with day-to-day, both with his Bloodhound team and the team’s sponsors.

“Looking back on all this, there’s a great line of people who have backed it, individuals who have quite possibly put their careers on the line and said ‘yes, we should do this. This is important and we should support this.’

“Each time we get a big sponsor, it’s a fascinating thing, it’s a wonderful moment, but a moment that doesn’t last very long because then, of course, you have to go get the next one.”

The long road ahead

Although Noble states that giving his sponsors something tangible back from their endorsements is nearly impossible, there is one sponsor who is openly touting the flow on effects of sponsoring the 1,000mph beast. 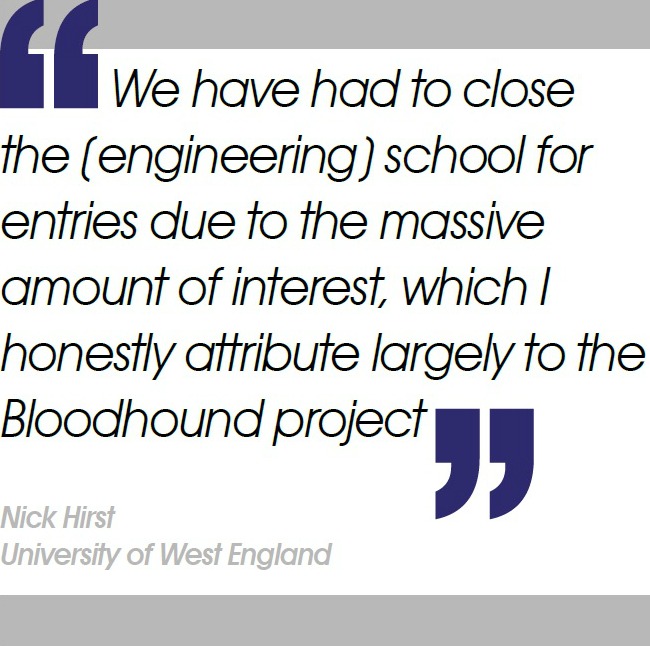 Keith Hicks is director of marketing and communications at University of West England, one of Bloodhound’s first commercial sponsors.

He has seen the engineering department at the university go through a massive growth in applicants, so much so that they have had to shut it down to any further enrolments. He attributes this almost entirely to the influence of Bloodhound and similar projects.

“Despite the large presence of aerospace companies in the area including GE aviation, Rolls Royce and Airbus, we used to see first-hand the lack of registrations for engineers in this field,” Hicks says.

“We would keep registrations open until as late as possible to get the highest number of students as possible. Now we have had to close the school for entries due to the massive amounts of interest, which I honestly attribute largely to the Bloodhound project.

“Since 2008 the university has experienced a doubling in its registrations of students in both its mechanical and aerospace engineering courses.”

So the system seems to be working. The money is coming in, the parts are being built, and the education is filtering through.

All that needs to be done now is to get the team and the car to the Hakskeen Pan in South Africa later this year to make its first high speed run, with the aim of hitting about 600-700mph.

Then the team will bring everything back to Bristol to redesign the back end of the car, install a larger rocket-firing engine, and then fly back to South Africa to make the final attempt at the land speed record.

Not to just beat the previous record set by Andy Green of 763mph, but beat it by about 30% and break the 1,000mph record.

Ok, so maybe there is still a lot to do before the project can really be called a success. But one of the biggest challenges the team and Noble face right now is simply dealing with the mounting pressure to ensure these next crucial elements of the project actually happen.

The last time Noble was leading a major land speed record attempt like this was when he was leading the Thrust SSC project, and he is the first to admit that the two cars are entirely different beasts.

But one consistency is his relationship with Bloodhound SSC driver, Andy Green. Any long-term relationship is going to have its tense moments, particularly when you’re working to such extremes, one of which could mean the potential fate of the driver.

But Noble remains steadfast in his praise for Bloodhound’s pilot, praising the man he jokes as “the world’s fastest mathematician” on his absolute commitment to the project and what it means to UK engineering.

“We’ve known each other a long time and it’s been 17 years now since the Thrust SSC record.

“Andy’s role is not exactly a consultancy role, it’s more like a friendly auditor. For example in terms of the cockpit design, that is entirely Andy’s world and he decides exactly what goes into the cockpit and what doesn’t; where all the systems and levers and knobs and everything goes.

“Every single aspect of this car has been through his inspection. You end up with this situation – and I remember from when I did it way back in the 1980s – where you end up with this tremendous confidence in the whole project because you’ve been a part of it right from the beginning.

“You’re absolutely satisfied that the decisions made have been the right ones, and satisfied that the quality of the people working on the project are to a very high standard and that the team has worked extremely well. This matters when you’re in the driver’s seat.”

And does he wish it was him back in the seat flying across the South African desert?

“Well, I’ve been very lucky haven’t I?” he ponders. “I’ve held the land speed record for 14 years – not everybody gets a chance to do that.

“I get a tremendous buzz out of the marketing and the running of the project and seeing this thing grow from just two or three people in a room now to about 80 people.

“Knowing too, that this is counter culture. Knowing that you really have to fight hard to keep this thing going, because as it gets nearer and nearer to running, people begin to examine it in closer and closer detail.

“But it’s a brilliant project and once we start to see these results in the education system that will really be something. We’re going to get an awful lot of engineers out of this, I’ll tell you!”