Guest reporter Mike Farish takes a closer look at how Bosch Rexroth is harnessing the power of industry 4.0.

When reduced to a series of bullet points, Industry 4.0 can come across as a bit dry. Descriptions like this, for instance, do little to set the heart racing:

But when dry concepts move beyond the theoretical into the practical, such as an operational production facility, that is when it starts to get interesting. One such place is the Homburg plant of Bosch Rexroth in the Saar region of South West Germany.

The plant manufactures hydraulic valves for mobile and industrial applications. The Industry 4.0 element is at first sight quite small and seemingly conventional in format. It comprises nine manual assembly stations in a compact rectangular configuration, devoted to the production of six types of hydraulic valves used in mobile machinery, such as tractors.

A closer look starts to reveal some rather more unusual features. One is that each of the assembly workers has a Bluetooth tag clipped to their belt that logs them into their workstation at the start of their shift. As deputy plant director, Dr Matthias Möller is quick to point out, that simple action does much more than just register the operator’s presence.

It also, for instance, selects the language in which assembly instructions will be displayed to the operator, the degree of detail involved, according to their qualifications, and on a purely ergonomic level, the font size that the worker finds most comfortable to view. 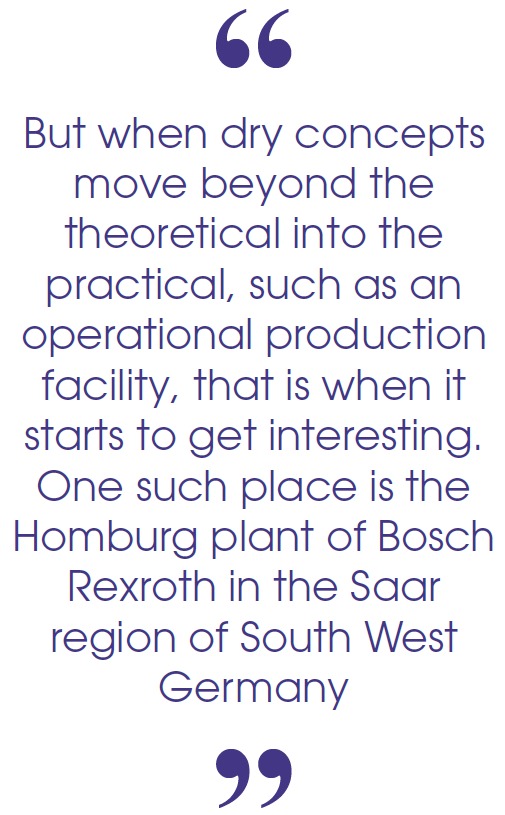 This means operator actions are automatically checked by various sensors to ensure that they are the correct ones for the particular assembly being worked on at the time.

An RFID tag on each workpiece identifies the product involved to the system, while a ‘pick-to-light’ system indicates to the operator the tray from which the appropriate component for their next action should be selected, and signals an alarm if they pick the wrong one.

Other capabilities include automated checking of the correct orientation of handheld power tools. And the workstations are not simply passive table tops linked by a conveyor; they are examples of an Industry 4.0 technology called ActiveAssist that Bosch Rexroth has developed in-house.

This integrates these assembly stations, already customised to individual operators, into the factory-wide IT systems, achieving new levels of both production reliability and efficiency.

The benefits are immediate and quantifiable. Bosch Rexroth’s own figures show that compared with pre-Industry 4.0 processes, cycle times within the cell have been reduced from 474 seconds to 438 seconds, while associated on-site inventory holdings have been cut from three days’ production to two.

But while these figures are illustrative of evolutionary improvement, data on the logistical set-up times required for product changeover indicates something much more revolutionary is happening. As Möller confirmed, set-up has been reduced from “450 seconds to zero”.

He is equally concise about how this was achieved. “It was realised with connectivity. The previous production set-up required the removal of all unnecessary components during change over from one product to another. As this required the restocking of lines between production runs, it took up to 450 seconds per changeover.”

This hiatus in production was a consequence of the high number of different products using the same line, with some 2,000 different components featured across all the possible assembly configurations. 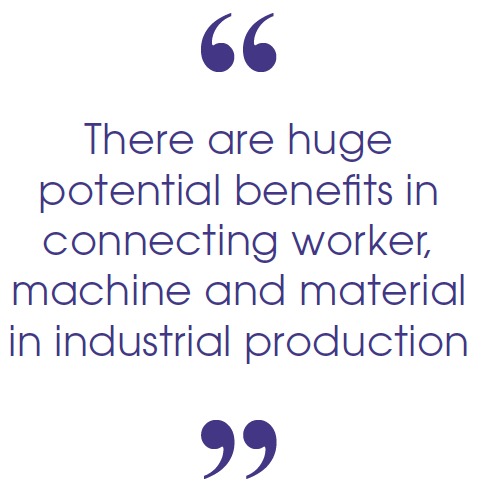 “The logistical task was driven by the quality requirement that only essential components were allowed to be at the workstation, to avoid the assembly of incorrect components,” Möller explained.

“Now we have the pick-to-light technology combined with RFID identification of each single product.” This means that the previous need to remove all the superfluous components for the next assembly run has been completely obviated.

“We can leave all components at the line all the time, because we can now ensure that only the necessary components for the new run are able to be picked by the worker.”

Just to one side of the line is another initially conventional-looking piece of kit that again represents something intrinsic to what Industry 4.0 actually means in practice. It is a large LED touchscreen interface between the virtual and real worlds that supports Industry 4.0-enabled manufacturing.

Known as ActiveCockpit, it is a real-time information system in which process data from the line and production control data from higher-end applications, such as the plant’s ERP system, are integrated for both display and interrogation by shop floor personnel.

It is a continuously updated interactive tool that supports not just briefing meetings for personnel before they start work, but process control and improvement during the course of a shift.

Bosch Rexroth has no intention of keeping the two systems to itself: both are intended for sale to the wider market, hence their use within the company serving the double function of product development and production tool. ActiveCockpit is, in fact, already available, with ActiveAssist scheduled for release later this year.

Möller said all this stems from a recognition by the company in the early part of this decade that harnessing Industry 4.0 capabilities would become crucial to commercial success, alongside a determination to develop relevant technologies and competences.

The go ahead for the Industry 4.0 assembly line at Homburg, for instance, was taken in 2013 and it has been in operation since October 2014. He is in no doubt that the installation has proven itself – and by implication the whole Industry 4.0 concept – in practice.

According to Möller the fundamental objective was to enable assembly of all possible valve types on one production line. “Our main aim for the first Industry 4.0 line at Homburg has been to gain the flexibility to enable production to ramp up and down, and quickly adapt to new product families. This has proved extremely successful,” he said, “so we are now looking at which other areas will benefit from Industry 4.0 techniques.”

Möller said the Industry 4.0 rollout to date has taught them some valuable lessons. At the most basic, there is the degree to which appropriate people development must accompany the technological innovation involved, though Möller suggested that this is not necessarily very exacting.

“We do not see a need for more specific skills for the assembly worker in our set-up, although for the maintenance worker and the production engineer there is a requirement to understand more complex systems,” he said.

“And while the technology is available and mature enough, integrating the workers right from the beginning is key for acceptance. In particular, mechanics, electricians and software engineers have to learn to work efficiently together.”

It may still be on an Industry 4.0 learning curve, but Bosch Rexroth’s experience so far has convinced the company that it will be worth its while to press on further. “We are implementing Industry 4.0 solutions to the next steps in our value stream,” said Möller.

“Having started with valve assembly, we are now looking at the machining area, and will follow up with the valve test area. We are quite certain that there are huge potential benefits in connecting worker, machine and material in industrial production in this way.”

The Manufacturer Smart Factory Expo is the UK’s only dedicated exhibition in response to Industry 4.0

Showcasing the best solution providers and technology offerings, this unique event is for manufacturing business leaders keen to adopt the relevant tools and knowledge to drive business growth.