The UK’s biggest machine tool exhibition took place in Birmingham in April, playing host to over 500 exhibitors. But does the growth of the sector’s flagship show illustrate a wider upturn in the industry’s fortunes?

2014 saw the biennial MACH exhibition embark on its second century in style.

Despite some alarming figures around export and growth in recent years, 2014 highlights a step change in industry outlook.

With over 500 exhibitors converging on Birmingham’s NEC and over 22,000 visitors over five days, attendance was up across the board and the audience was eager to see the eclectic offerings of UK industry; from innovations in drilling tools and saw blades to advanced technologies such as 3D printing and additive manufacturing.

The rise in attendees reflects renewed optimism in UK manufacturing and the investment intentions of companies in a spread of sectors.

Meanwhile, the uptick in exhibitors shows the machine tool sector is enthusiastic about the chance to move on from some difficult years and aware of the need to emphasize brand presence as first time buyers are exploring the market and long dormant investors are waking up to the need to refresh their technology.

When investment dried up and large OEM companies took a step back, the environment became parched for SMEs in the supply chain.

In 2009, even Renishaw, the renowned UK plc and one of the largest exhibitors at MACH, said a large proportion of its workforce was “at risk” of job losses.

Other big hitters such as Yamazaki Mazak also struggled during the downturn which resulted in job cuts at its Worcestershire site.

But this dark outlook has lightened. Last year Renishaw announced record revenues of £346.9m, reflecting growth in the UK market and beyond.

The start of an investment wave?

The opportunities brought by a growing economy have spawned a culture of investment across UK industry in 2014 and this was highly evident at MACH.

An SME survey conducted by Lloyds Bank Commercial Banking at the event showed 73% of participants are planning to invest in new plant and machinery in the next 12 months.

(73%) are in-tending to look overseas for new growth opportunities in 2014, while 27% of those surveyed are intending to reshore their operations back to the UK over the next year.

Richard Holden, head of manufacturing at Lloyds Bank Commercial Banking, says: “Hearing that manufacturers are set to drive forward plans to invest in new machinery and are creating a number of new job opportunities is not only a boost for the economy, but a significant sign of progress in an industry that was hit hard during the downturn.

The survey also found 90% of manufacturers will have new job opportunities avail-able in their business over the next six months, and Mr Holden says Lloyds is committed to help fill these jobs by its investment in initiatives such as the Advanced Manufacturing Training Centre.

“The findings show that there is a considerable demand for new apprentices to overcome the projected shortage of engineers in the manufacturing industry, and this is why Lloyds Bank recently launched a £1 million-a-year sponsorship of the Advanced Manufacturing Training Centre at the Manufacturing Technology Centre in Coventry to develop more than 1,000 engineering apprentices and trainees to help close the skills gap,” he says.

Graham Dewhurst, outgoing director general of the Manufacturing Technologies Association (MTA), which owns and runs MACH, says the 2014 event is a tangible demonstration of the upward trajectory which the UK’s machine tool industry finds itself heading.

“There is a buzz around UK manufacturing that we haven’t felt for a long time,” he comments. Official MTA figures confirm attendance rose by 10% for this year compared to 2012.

“It’s telling that of our 500-plus exhibitors, 150 were not at MACH 2012,” he added. “Some of that is due to established industry names, who took a break from exhibiting after the recession, realising that the opportunities are too good to miss; but the number of companies taking places in the NEC halls for the first time in order to show the market what they have to offer is really encouraging.”

Technology exhibitors and investment-curious visitors at MACH were both aided in making the most of the show by the return of OEM giants Airbus and Rolls-Royce, who took major pavilion space.

The presence of these industry goliaths has become a real boon to the past couple of shows, allowing supply chain companies to rub shoulders with their key customers and talk about the kinds of capability that will lend competitive advantage.

The UK’s booming aerospace and automotive sectors have been major drivers behind the recovery of the UK machine tools industry. Dave Cawkwell, sales manager at Berkshire-based SME SGS Tools tells : “We’ve focused on the aerospace industry because of its sheer mass, but we’ve recently seen a lot of subcontract work emerging from the automotive sector, due to the success of the likes of Jaguar Land Rover,” he said.

“Companies like JLR have focused on making all their products in the UK which has been brilliant for firms like us.”

Although business opportunities are on the increase, the spectre of the skills gap is particularly troublesome for the machine tools sector.

One exhibitor described the lack of skills in the sector as “crippling.”

Creations on display at MACH such as the Bloodhound SSC and a McLaren Formula 1 car are all impressive engineering feats, but if they fail to capture the imagination of youngsters then such innovations will become stunted and fade from the UK industrial landscape.

As in many other industry sectors, manufacturing technology vendors say they can see the average age of their workforce rising year on year – but feel almost powerless to reverse the trend.

Bruderer, which has UK facilities in Birmingham and Luton, provides a good example.

Its UK managing director Adrian Haller says that the average age of his workforce is now 59, a fact that makes recruiting young talent more problematic than it already was.

“I’m struggling to get new skilled people to replace existing staff coming to the end of their careers,” he confesses.

“Furthermore, some of the big manufacturers can pay 16-17 year olds £250 per week straight out of school, and getting the money to compete with the large firms is nigh on impossible.”

Mr Haller continues: “Everybody you talk to in the industry will tell you how hard it is to acquire skills. A lot of work needs to be done to show young people that in order to get the computer in front of you and the iPhone in your hand, someone has to manufacture it.” 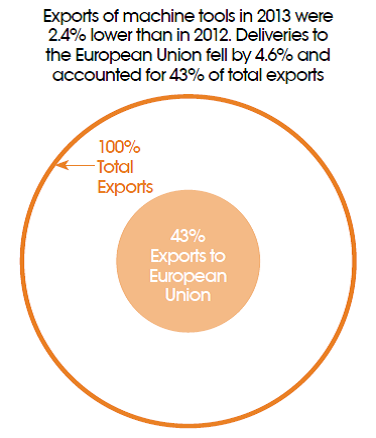 The move was met with approval from manufacturers, who feel investment is critical to make the UK a strong centre for making goods to export abroad.

China is the biggest single-country export destination for machine tools accounting for 16% of all UK exports for the sector.

It is followed by a resurgent USA, which occupied second place as an export destination for the first time since 2009.

And as the UK starts to seek further flung export markets than Europe, so the wider world is waking up to MACH itself.

The Midlands Assembly Network (MAN), a collaborative consortium of 10 regional manufacturers, identified this rise in foreign presence at the show.

“There was a significant increase in the number of people attending MACH and the atmosphere seemed very positive especially from international delegates keen to explore the opportunity of UK manufacturing,” says MAN business development manager, Steve Gaston.

“MAN received enquiries for nearly all of our member companies and there was a lot of appetite for finding solutions to complex casting, tooling, electronics, machine building and plastic injection issues.”

While even the biggest of cynics would find it difficult to argue the fortunes of UK manufacturing haven’t improved in recent times, there remains much to do.

The UK must do more to leverage its international reputation as a good place to do business in order to attract foreign investment and optimise the international opportunities for firms already based here.

Sentiment at MACH indicates that industry still feels the need for assurance that government backing for skills and training, as well as pressure on finance providers to support smaller firms, will be maintained in the long term.

That said, there was a palpable feeling of positivity at the show which built on the recent manufacturing friendly Budget and other evidence of commitment to making the UK a competitive manufacturing environment. At MACH 2014 UK manufacturing took another big step in the right direction.