Posted on 7 Oct 2015 by The Manufacturer

Security is being stepped up at a Plymouth factory after a routine risk-assessment revealed its sheet-metal fabrication capabilities could put the planet in peril in the event of an extra-terrestrial invasion. Jon McKnight reports.

“We’ve always been thorough with our risk-assessments,” said a spokesman for Dura Manufacturing, “but it suddenly struck us that we’d be a sitting duck if Davros, the creator of the Daleks, got hold of our manufacturing facilities and used them to mass-produce his killing machines.”

The factory in Newnham, Plympton, usually produces designer cabinets for garage interiors as well as street-sweeping machines for Germany and more than 100 other products as a sub-contractor; but its obvious suitability as a Dalek production centre is causing concern at the highest level.

“You only need to glance at a Dalek to see how easy it would be to produce them here in galaxy-threatening quantities,” said the spokesman.

“They’re basically bent-metal enclosures with punched-out adornments and bespoke fittings including weaponry and comms devices – something we could manufacture and assemble here with our eyes closed.

“Even worse, this factory could manufacture Daleks to British Standards, as we’ve just been awarded our ISO 9001 accreditation for quality management.

“God help the planet if that happened – and I imagine we could say goodbye to our ISO 14001, too, as all the good work we’ve done towards effective environmental management would count for nothing if we were responsible for unleashing legions of British-Standard Daleks on to an unsuspecting universe.”

He estimated that the Dura factory, if commandeered for war work, could churn out Dalek casings at about one a minute and even paint them in platoon colours using its new €800,000 paint plant that allows for fast colour-changes and won it the coveted Service First accreditation from AkzoNobel. 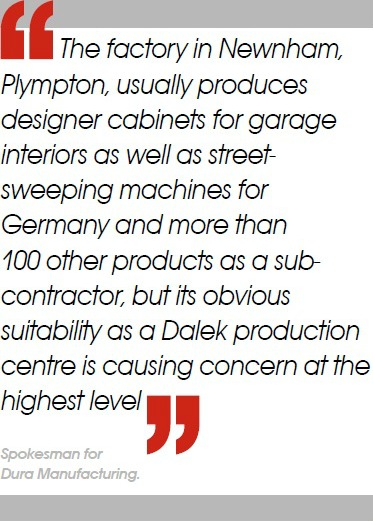 “We’ve invested so much in state-of-the-art machinery, including our new £600,000 Amada EMZ punch press, that the Daleks would be built to a higher standard of precision and finish than anything the universe has seen.

“As a one-stop shop, we can manufacture, assemble, paint and ship all under one roof, so we could create and build every part of the Dalek – apart from the sink-plunger – and you can get those for a couple of pounds at the plumbers’ merchants just round the corner.

“We’re so well set up for our subcontracting work here that machines like the Amada can run unattended right through the night, leading to the nightmare scenario that flat sheets of steel being fed into one end of the production line would be trundling off later, as fully-finished high-spec Daleks ready to wreak havoc wherever they went.”

A Downing Street spokesman declined to comment, other than to state that the “usual authorities” were “monitoring the situation closely”. He refused to confirm whether a meeting of Cobra would be convened.

However, a Dalek expert who spoke to us on condition of anonymity told The Manufacturer: “This is rather more serious than Whitehall is prepared to admit to.

“The problem is that British manufacturing is so much better than it used to be, and production facilities like Dura Manufacturing are so well-equipped and efficient that they could be lethal to humanity if they fell into the wrong hands.

“It just shows how far we’ve come since the Seventies, when British manufacturing was in such a state and had such a poor international reputation that Britain was the last place in the universe that the Daleks would have chosen to reproduce themselves.

“If they’d managed to find a factory with a workforce that wasn’t either asleep or on strike, they’d have ended up with Daleks that went a few yards before grinding to a halt, overheating, or wobbling about aimlessly until their bits dropped off.

“They’d have been just like the Friday Teatime-Job cars that made Britain a laughing-stock – cars that were thrown together in a great hurry because it was coming to the end of the last shift of the week and the assembly-line workers wanted to get home for the weekend.

“Any Daleks that came off those production lines wouldn’t have been much of a threat to a little old lady, never mind the galaxy.” 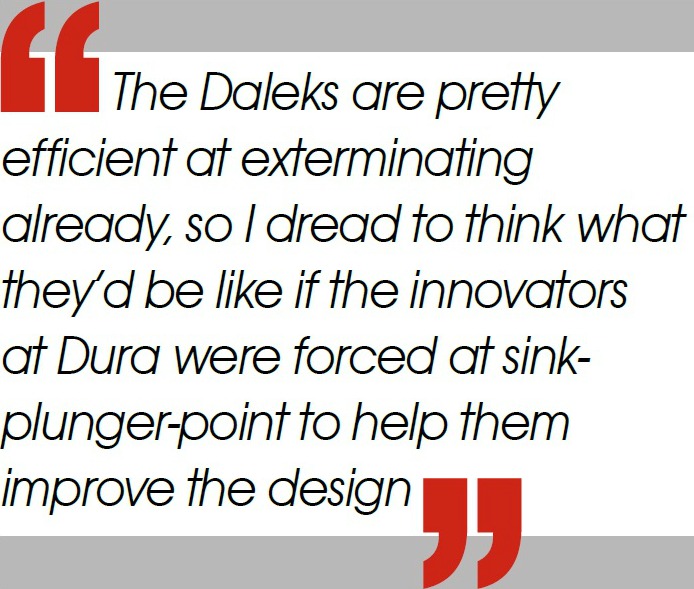 The expert took issue with the official account of the origin of the Daleks, dismissing it as “a myth put about to avoid alarming the populace unduly”.

“Although the rumour persists that the first Dalek was actually designed by some chap at the BBC – which is exactly what the Establishment wants us to think, of course – the Daleks were actually the brainchild of Davros, the megalomaniacal dictator of Skaros.

“The problem is that half the population don’t even believe Davros exists, and the other half mix him up with the Swiss ski resort where the World Economic Forum takes place.

“Davros needed to produce a shell that would keep the gloopy, vulnerable life-forms safe from almost any attack – an exo-skeleton, if you like – so he came up with a solution that we here on Earth have learned to fear: a cross between a Nazi and a tank.

“As anyone who’s studied the documentation on the genesis of the Daleks knows, Davros tried to produce the Dalek shells in huge quantities using mass production techniques, but his premises were destroyed in a still-famous act of sabotage.

“That’s why we’re so worried about the Dura Manufacturing facility in Plymouth. From Davros’s point of view, it’s a dream come true, as he could use it to manufacture Daleks in limitless quantities and make them much more robust than previous models.

“The idea of Daleks being built to Dura’s standards is one of the most frightening things imaginable, as they have guys at the factory like Chris Farley, whose experience in CAD design means he’s forever tweaking and improving designs to make them stronger or more efficient.

“The Daleks are pretty efficient at exterminating already, so I dread to think what they’d be like if the innovators at Dura were forced at sink-plunger-point to help them improve the design.”