UK manufacturing output decreased by 1.2% in November last year compared with November 2014, according to the latest Index of Production figures released today.

The Office of National Statistics (ONS) data estimates that total production output increased by 0.9% in November 2015 compared to the same period a year ago. 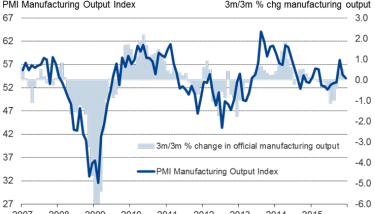 There looks to have been increases across three of the four main sectors, with the largest contribution coming from mining & quarrying, which rose by 10.5%

Regarding the 1.2% decrease in manufacturing output, the largest contribution came from the manufacture of machinery & equipment not elsewhere classified, which fell by 13.7%.

ONS estimates total production output to have decreased by 0.7% between October 2015 and November 2015, with manufacturing output falling by 0.4% over the same period.

In the three months to November 2015, total production and manufacturing output increased by 0.2% and 0.5% respectively on the previous three months.

“The significant build-up of risks throughout last year, linked to the slowdown in the global economy, loom large for manufacturers as we go into 2016 with no sign that slowing export demand, the strength of the exchange rate and volatility in major markets will soon ease.”

“The Pound remains relatively strong, particularly when compared to the Euro. This makes for very tough exporting conditions to the UK’s largest single market for manufactured goods.

“Unexpectedly poor factory output in China has not only dented investor and business confidence, but introduces demand concerns for suppliers to China and supply chain risk for those dependent on Chinese components.

“In spite of the output data, UK manufacturing continues to be very competitive with some of the most innovative businesses and skilled talent in the world. The UK PMI remains above 50 and UK manufacturing should prove to be relatively resilient in 2016.”