Posted on 5 Feb 2015 by Jonny Williamson

The right relationship can go a long way in saving precious pounds in energy expenditure. E.ON is helping one sawmilling business achieve exactly this. 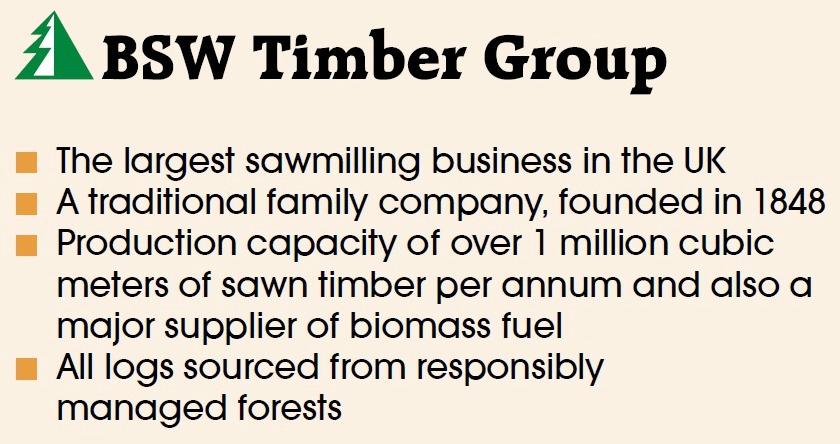 With eight separate sawmilling operations – seven of which are based in the UK – BSW Timber Group is one of the many energy intensive companies currently operating within the UK. The business currently spends between £4m – £4.5m per year on energy.

When BSW’s latest energy contract was nearing conclusion, the company’s group purchasing manager, Kevin Young was more than willing to give E.ON some attention when they called to discuss the company’s future energy plans.

“Our current contract was coming to a close, so it was an opportune time. E.ON are a known entity, they’re not a small broker. And E.ON Portfolio Solution (EPS) were known to us,” Kevin said.

The conversations resulted in a relationship, which saw E.ON creating greater visibility and transparency of energy costs within BSW’s business. As Kevin points out, they have taken a very hands-on approach.

“E.ON and EPS have given me a significant breakdown, not just transparency and visibility of what energy prices are doing going forward and how they will affect our business, but I can now see very specifically the effect of different third party charges on our costs.

“It’s been very, very hands on. Our E.ON account manager has been to a number of our sites and presented what they can do for us.”

“On top of that I went across to Düsseldorf and met our EPS portfolio manager and had a look at their systems,” Kevin said.

“Since then, there have been a number of initiatives implemented here in the UK looking at opportunities, efficiencies and how E.ON can help us.

What E.ON presented was cost saving opportunities in terms of both peak period charges and Triad charges (Triads are the three half hour periods of peak demand that occur between November and the end of February and are used to set transmission charges).

“A big initiative they helped me with was focusing on peak energy periods and how we could potentially adjust shift patterns to miss those periods and save money.”

The relationship between E.ON and BSW is still in its relative infancy, so pinning an actual pound figure to the cost saving is difficult at this stage, Kevin says.

“I can’t put a saving on what we’ve actioned so far, but we’re now missing the peak periods and avoiding Triad charges at two of our sites. This gives a two fold benefit to this activity and E.ON have helped us greatly by highlighting the opportunity.

Kevin is quick to point out that energy is a “necessary evil” when it comes to manufacturers and energy intensive industries. But it is clear that manufacturers must take on a large percentage of the responsibility.

“Without energy we can’t run the sawmill. But it was actually trying to switch our employees’ mindsets to realise there are things you can do to make a difference. And what has fallen out of all of this is initiatives to reduce energy costs and make us more efficient with our energy. Where you make the saving is simply by using less.”