Digitalising SMEs is critical to the future of UK manufacturing

SMEs are pioneering disruptive technologies, but this talent for innovation must be matched by visionary policies and funding from government and industry if UK manufacturing is to keep-up with the pace of development around the world, argues David Hughes, Managing Director at ABB UK.

The multi-million-dollar deals of multinationals may steal the media headlines but make no mistake:  small and medium-sized enterprises (SMEs) are the engine room of the UK economy.

The UK was home to 5.5 million SMEs – defined by the UK government as organisations with fewer than 250 employees and turnover of less than €50m – in 2021, more than 130,000 of them in the manufacturing sector. SMEs accounted for 99.9% of the business population, employed 16.3 million people (61% of the private sector total) and generated an estimated £2.3trn in turnover (52%).

It doesn’t take a statistical genius therefore to see that SMEs are critical to the future success of UK PLC. I would go further and say that SMEs are the birthplace and bedrock of disruptive technology and innovation in the UK.

Ideas are one thing, however; turning them into reality is another. Much has been written about the opportunities digitalisation offers the UK in terms of efficiency and international competitiveness. Less explored is how to support SMEs on their digital journey and enable them to take advantage of the multiple benefits that industry 4.0 presents in terms of productivity, sustainability, and cost.

In this article, I will give my view on the main hurdles to digitalisation in the UK, and how overcoming them requires vision, collaboration and funding on a meaningful scale so that SMEs in particular – and UK PLC in general – can keep pace with more digitally advanced nations such as China, Germany and France, and compete from a position of strength in an increasingly competitive global marketplace.

What is stopping SMEs from digitalising?

Towards the end of 2020, I wrote a piece in which I rejected the assumption that UK manufacturing doesn’t work as hard as its rivals; instead, I argued that we need to increase our use of automation to increase productivity. For example, global robot density i.e., how many robots are installed per 10,000 workers. By this measure, the UK probably languishes in division three when it comes to the uptake of automation – take car manufacturing out of the equation, and it falls to the fourth division.

One of the reasons for this, I said, was the tendency for UK companies to just focus on purchase cost and rapid payback times when installing a new asset, rather than taking a more holistic view where initial CAPEX is measured against longer-term factors such as productivity and equipment downtime.

Fast-forward 18 months, I wish I could say that things have improved. Instead, the UK continues to stand still.

This is borne out by a report from Enterprise Research, ‘The State of Small Business Britain 2021’, published in January 2022. While acknowledging that Covid-19 accelerated home and hybrid working and therefore digital adoption among SMEs, the report cites OECD statistics that suggest UK firms have been slower adopters of digital technologies than those in other countries.

“Limitations in UK SMEs’ absorptive capacity are reflected in their level of ‘digital readiness’ – or their pre-disposition or propensity to adopt digital technologies,” the research report states.

This builds upon another Enterprise Research report from 2021 into the digitalisation of UK SMEs during the pandemic, which identified compatibility with existing equipment as a barrier to digital, along with a lack of access to finance and cyber risks. Some issues were specific to the make-up of the SME, with older firms citing workforce resistance and younger ones a lack of funding.

There is also a perception problem, in that SMEs that are lagging in their digital journey may not be sufficiently aware of, or underestimate, the obstacles to implementation of new digital technologies.

As the government makes more free trade agreements, digitalisation becomes even more important to allow UK SMEs to compete for – and win – business in Europe and beyond.

A question of culture

Underestimating the scale of the challenge when it comes to digitalising and automating small-scale manufacturing is one hurdle, but often we find that SMEs are very resistant to any kind of change.

Here’s a real-life example. ABB sat down with a chief engineer, who basically told us he believed digitalisation was just a gimmick that technology companies had devised.

So, ABB asked that chief engineer some questions, starting with how many times do you have an equipment break down? Do you have to shut down the entire production line and the workforce? If this takes place at midnight on a Friday evening, do you spend precious time and money trying to fix specific servers because you need them so desperately? The answer to all these questions was ‘yes’.

ABB then asked, what if you had a tool that not only told you when something was about to fail, but also enabled you to plan for that outage to avoid costly downtime? The chief engineer began to understand that, ultimately, we were talking about a limited initial investment versus very serious implications should something fail on the manufacturing line.

This mentality of ‘if it isn’t broken, don’t fix it’ and a refusal to step out of the comfort zone is often matched by the idea that automation means job losses, whereas statistics show that automation actually creates higher skilled jobs, a fact borne out by productivity mapping across Europe, which shows that a project takes five days on average in the UK, compared with a full day less in Germany.

A lot of this resistance is most likely a legacy of the post-war years, when the UK took pride in polishing and maintaining what it had rather than investing in building something new. For this reason, we cannot realistically expect to change workplace culture among UK SMEs overnight; instead, it is a journey made up of many small steps, and employers must ensure staff are engaged at every step of the way and upskilled to meet the challenges of the digital future, a key element of the Made Smarter initiative.

This process begins with building long-term relationships with colleges and universities in the form of outreach programmes, internships and work placements to ensure that UK graduates know what to expect when they enter the workforce, possess practical, real-world skills that enable them to hit the ground running, and to avoid a costly talent drain to more technologically advanced countries.

At the outset, I mentioned that SMEs are the birthplace and bedrock of disruptive technology and innovation in the UK. So, why isn’t innovation always translated into long-term success?

At ABB, we often see that SMEs have a great idea, apply it to one project and then it is forgotten. Disruptive technologies must be developed so that they can be replicated and scaled up again and again; only then will SMEs and their partners see real value from innovation.

SMEs, understandably, often try to develop technology solutions on limited budgets, only for a promising idea to fail because it doesn’t have the infrastructure and funding behind it. Often, this is down to mindset: many SMEs still believe that being productive means working an extra four or five hours a week, rather than investing time and money in something that is truly innovative in the long term.

SMEs must align themselves with partners that can see the potential of that initial idea and possess the expertise and the funding to identify which segments are ripe for innovation and bring that solution to market at the right time.

With that said, SMEs also need the confidence and freedom to pursue new avenues and innovations. At ABB we have a saying, ‘fail fast’ – in other words, if something isn’t working, don’t be afraid to try something new. In this regard, support and sponsorship from government and industry is crucial.

The Made Smarter coalition

The Made Smarter coalition, which comprises leaders and innovators in digital technology spanning UK government bodies, academia and technology specialists such as ABB, is an example of how that support and mentoring, backed by strategic funding, can help steer UK SMEs on their digital journey.

Earlier, I mentioned upskilling, which, along with future skills, is one of four recommendations made by the industry-led Made Smarter review – the pilot project of which successfully upskilled around 200 SMEs in the north-west of England – into how UK manufacturing industries can prosper through digital tools and innovation, the others being leadership training, adoption advice and innovation.

One of the takeaways from last year’s North West productivity forum, organised by the Productivity Institute, was mentoring sessions during which SMEs could learn from larger organisations about the steps required to automate and digitalise. Talking to SMEs, ABB found that less than 20% had a medium-term business plan to give them the stability they need to develop and grow their business.

In conclusion, SMEs represent both the present and the future of UK manufacturing. We must nurture this bedrock of our industry by creating a circular economy based on knowledge-sharing and financial support that encourages SME’s to thrive, for the benefit of everyone.

To read similar articles to this one, check out our Leadership & Strategy channel. 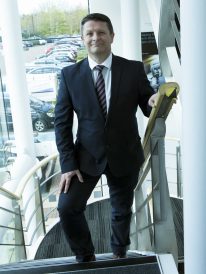 David Hughes has had a long and distinguished career working across many sectors including Utilities, Renewables, Rail, Food and Beverage.

He joined ABB UK in 2003 and held senior positions in four divisions (Power Products, Power Grids, Motion, Robotics and Motion), before being appointed UK Chief Executive Officer in October 2019. Before ABB, David worked for Rolls Royce and studied electrical engineering at Sunderland University, having started his career as an apprentice.

David sits on the CBI Manufacturing Council and was a BEAMA board member for many years. David has championed many sector initiatives, engaging with Government on subjects such as industrial automation, workplace development (health and wellbeing), apprenticeships / retraining, industrial productivity and innovation. He is a member of the Government’s Made Smarter Commission, Making it Board – Liverpool Enterprise Partnership, North West Productivity Forum, and the Made Smarter North West Pilot.