Posted on 9 Jul 2013 by The Manufacturer

Senior Economist at EEF, Rachel Pettigrew, delves deeper into the surprising output drop from UK manufacturing in May.

Today’s official statistics cast a bit of a cloud over the manufacturing sector and the positive run of data we have seen in recent months. The trade and production figures released today indicate the Manufacturing sector faced a difficult May:

Taking these figures at face value, however, leaves out a lot of the flavour of the manufacturing sector. The top layer of data hides a much more varied and interesting picture of how the sector and the economy are operating.

We have said many times that the manufacturing sector is very diverse and this can be seen in today’s output figures for May which are shown on the chart below. 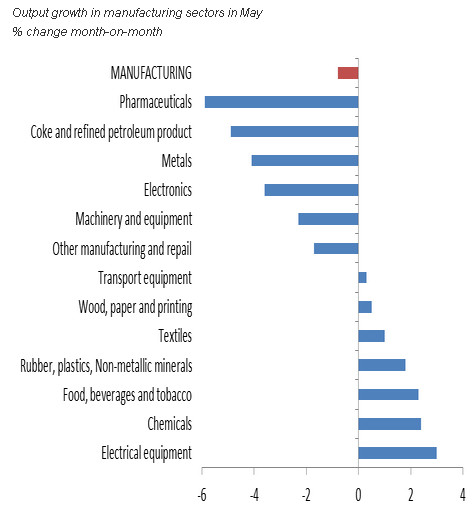 As seen above, 7 out of 13 manufacturing sectors grew in May with the strongest gains being made in the food and drink, electrical equipment and chemicals sectors. However, these output gains were not enough to offset bigger contractions in pharmaceuticals, metals and electronics leading to a second month-on-month fall in manufacturing.

Looking in more depth at the trade figures we can also see that, despite the worsening in the trade deficit, exports have picked-up. Total goods exports grew £0.4 billion or 1.5%, rising to £25.6 billion.

… and wider indicators paint more of a mixed and positive picture

Monthly figures can also be quite volatile so taking a wider range of economic indicators gives a better read on the mood of the sector.

So the real story is…

There are signs that confidence is returning and growth should start to resume as we move into the second half of the year. We need to be realistic though; we need to see more momentum in the economy. If the UK is to make any progress towards better balanced growth, greater confidence needs to be quickly followed by a pick-up in investment.

To read more from Rachel Pettigrew and EEF, click here.