EEF conference 2013: Naysaying is out of fashion

Posted on 4 Apr 2013 by The Manufacturer

They say bad news makes good news – but it was the optimists that stole the show at EEF’s second National Manufacturing Conference on March 5.

“What on earth makes us think that central government can do any better? What evidence have we of its omniscient wisdom!”

This was Lord Heseltine’s robust response at EEF’s second National Manufacturing Conference to a delegate who questioned what protection he planned against local failure in his scheme to decentralise economic development, giving greater investment powers to British regions.

Laughter swelled as battle scarred manufacturing executives, with too much shared disappointment in government, acknowledged his earlier diagnosis that “there are no easy options left” in the pursuit of growth. Defying pessimism, they focussed their attention on the effectiveness of tabled solutions to challenges in skills provision, supply chain resilience, export success and finance. 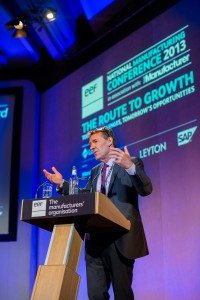 “Analysing data on national retail sales and consumer spending shows that we are moving towards an equilibrium” – Jim O’Neill, Asset Management, Goldman Sachs

Optimism, in short, was a characteristic of the day. “It feels like progress is being made. There is not the same sense of angry frustration as was [at the EEF National Conference] last year,” said Craig Naylor managing director of precision tooling company NTR.

The opening presentation from Jim O’Neill of Goldman Sachs Asset Management, showed that such optimism is not without reason. He carefully laid out evidence to show that the global economic outlook is not as dire as most believe.

Mr O’Neill, who coined the term BRIC in reference to the world’s fastest growing economies, clarified the business imperative of becoming involved in those markets. He also defined a global economic rebalancing of power between the US “which used to consume too much and produced to little,” and China “which used to consume too little and produce too much.” Analysing data on national retail sales and consumer spending shows that we are moving towards an equilibrium says O’Neill.

Glossing over concern in some quarters that China’s growth is slowing, O’Neill stated some stunning facts about its continued expansion – between 2010 and 2012 China’s growth equalled the entire value of India’s economy, worth over $4 trillion.

Countering naysayers who moan that the UK still exports more to Ireland than it does to the lucrative BRIC markets, Mr O’Neill stated that “this is no longer true”. Canny firms are changing the balance and O’Neill revealed that UK exports to the eurozone have in fact declined by 10% since 2000. In the meantime, UK exports to the BRICs have grown to account for 8% of what Britain sends overseas and Goldman Sachs’ guru says this should reach 17% by the end of the decade.

The message to those with a thirst for growth was this – grab your competitive advantage while you can.

But do UK firms really have this thirst, and who is helping them quench it?

An interview with Siemens UK CEO Roland Aurich at the conference touched on the now traditional comparison of UK SMEs with the more mature German Mittelstadt, characterised by professional management despite often being family owned. By comparison, later comments from an expert panel of industry leaders and finance professionals linked family management in the UK with a ‘lifestyle’ approach to business which often dulled aspirations for expansion.

This linked to debate on access to finance. A divide became apparent between those with anecdotal evidence of being turned down for the funding they needed in order to invest and expand, and bank representatives who insisted that they were willing to lend to good business propositions but were experiencing little demand.

What is it we love about the Mittelstadt?

Mark Ridgway, president, the Manufacturing Technologies Association: “I strongly believe that the internationalisation of SMEs is essential in achieving UK growth. But the conference exposed a confused view of SME ambition and competency. We heard family run businesses described as the backbone of the German manufacturing sector with stable long term strategies, but similar ownership in the UK being associated with ‘lifestyle’ operations. It also became clear that understanding of supply chains and the potential position of SMEs within them is weak in some quarters. The possibility of an SME being a capital equipment ‘prime’ was ignored in the supply chain workshop.”

Craig Naylor, managing director, NTR: “It was great to hear [the shadow Chancellor] say that they are working on a system to reduce the influence of party-political interests in policy making. But at the same time he admitted that political point scoring is getting worse! We can only hope that the aggravation of effecting change is making things worse before they get better. I only know that businesses are tired of the rhetoric. I’m more interested now in seeing what we can do independently as an industry – with customers, suppliers and academia – to create confidence.”

Let the macro message get you moving

Chris Tompson, CEO, Xpresss Group: “I’ve been made aware that we must accelerate our investment plans. Jim O’Neill made it clear that, for wider industry and individual companies, the opportunities are in the BRIC economies – for Xpress the focus is Brazil. But his startling statistics on the rate of growth in the BRICs and how quickly those markets are developing show that we must move faster to gain a meaningful competitive position. We’re doing the right things strategically, but we must do them quicker.

Chris Sullivan, chief executive of the UK Corporate Banking Division at Royal Bank of Scotland stated that the bank “is holding £55bn in SME current account deposits.” He held this up as proof that most companies are not looking for debt and are cautious about re-investing their reserves in an uncertain climate.

Lord Heseltine agreed. “There is no army of people looking to increase their debt,” he stated, also asserting that this is reasonable in a time of low confidence.

In such a context, Heseltine argued, it becomes ever more important to effectively stimulate competitive spirit. He is confident that his plan to deliver regional business funding, won in competition between 39 local enterprise partnerships, is an effective way of doing this, if coupled with better capability in the nationwide network of the British Chambers of Commerce and sector trade bodies. The UK compares unfavourably with European peers when it comes to the clout and strategic alignment of these networks.

Heseltine’s plan for growth is driven by a belief that the UK must raise its average business performance. “It is easy to find examples of excellence in Britain,” he said. “But the global economy will judge us on our average.”

The positivity of Jim O’Neill and Lord Heseltine was well received by most delegates in stark contrast to the negative campaigning of shadow Chancellor Ed Balls. While delegates welcomed news that Sir John Armitt has been tasked with finding ways to reduce the impact of party political interests in long term policy making, most were doubtful that any real difference could be made to such an embedded aspect of British politics.

It was also observed that, while Mr Balls preached long termism and identified the need for an industrial strategy, he failed to acknowledge or respond to the strategy issued by the Department for Business Innovation and Skills last September. He also sidestepped a request from one delegate that Labour should adopt EEF’s industrial strategy, Route to Growth published in November.

Three steps to RFID success: From the sports field to the supply chain