Posted on 1 Jun 2015 by Victoria Fitzgerald

After a surprising election result in May, Victoria Fitzgerald looks at what a Conservative Government means for manufacturing in the UK.

On May 7, 2015 the Conservatives achieved what the BBC’s political editor Nick Robinson called “Mission Impossible – a Tory majority”. Whether this result has left you feeling like a Tory lapdog with two tails or positively blue, the fact remains that the Conservatives triumphed in the 2015 general election, with a majority of 12, winning 326 seats.

But what does this mean for the manufacturing sector? There are conflicting views. On one hand manufacturers can be comforted by at least a sense of continuity and a relative degree of stability, not to mention a catalogue of good performance figures with the UK currently being the 11th largest manufacturing nation in the world, making up 11% of UK GVA and 54% of UK exports, as well as, directly employing 2.6m people. 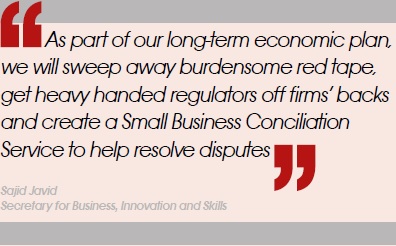 It also seemed that the Coalition did make some progress in supporting manufacturing. The maintenance of relatively low corporate tax rates and a moderately flexible labour market – which has benefitted from job friendly employment law and an open EU labour market – has done much to assist UK manufacturers’ competitiveness.

But the critics would say the figures were all part of Tory propaganda engineered to assure us that austerity has worked. In reality, the deficit has grown 10% in the last year to over £100bn; average pay, taking account of rising prices, has fallen every year for six years; and Government investment has decreased from 3.6% of GDP to 1.5%.

After the news broke, figures from all areas of industry spoke out to implore the new Government to address key issues to support the growth and prosperity of UK manufacturing. Terry Scuoler, CEO of EEF, urged policy makers to deliver on the real opportunity to properly rebalance the economy and ensure a strong focus across government on investing in and building on our industrial strength as a manufacturing nation.

Five key areas have been cited as a priority for nurturing a strong manufacturing sector, those include: addressing the decline in productivity levels, the lack of credit for SMEs, infrastructure and skills.

Appointment of the new Secretary for Business, Innovation and Skills is a major concern for manufacturing businesses. Firms will be looking to Javid for a seamless transition from his predecessor and industry champion Vince Cable, as well as, a focus on industrial strategy; maintaining funding for research and innovation; and support for exporters through UKTI; and infrastructure projects.

CEO of EEF, Terry Scuoler commented, “Sajid Javid takes on this critical brief at a pivotal time for the economy and industry. Business needs stability and continuity in policy and the Government’s commitment to a long-term economic plan and business strategy remains key.

“The new Secretary of State will also play an important role in any EU negotiations and in the forthcoming referendum, and I am sure he understands that the vast majority of businesses he will now be representing  in Government want Britain to remain at the heart of a reformed Europe.”

In one of his first statements after taking up the role, the former Secretary of State for Culture, Media and Sport, backed the plight of the small business and promised to address regulation, saying: “Small businesses are Britain’s engine room and the success of our whole economy is built on the hard work and determination of the people who run and work for them.

“As Business Secretary I will always back them and, in my determination to get the job done, one of my first steps will be to bring forward an Enterprise Bill that helps them to succeed and create jobs.

“As part of our long-term economic plan, we will sweep away burdensome red tape, get heavy handed regulators off firms’ backs and create a Small Business Conciliation Service to help resolve disputes.”

James Wharton, MP for Stockton South, was appointed to a ministerial role for the Northern Powerhouse. The new position gives him responsibility for the development of infrastructure and industries in the North, where universities will benefit from expanding their offer to global industrial partners.

Prof. Sir Keith Burnett, VC of the University of Sheffield, said: “We are on the eve of a new industrial renaissance. Today The Prime Minister has taken a leap towards fully realising this vision with the appointment of James Wharton as minister responsible for the Northern Powerhouse. George Osborne has promised investment in major infrastructure projects and innovation.

“The Northern Powerhouse will see a resurgence of the UK not only as a crucible for financial services and creative industries, but a country that makes essential parts for export. Equity markets alone can no longer support the route from innovation to product. Only institutions, such as universities and Government, can take a longer-term view and invest in the innovation we truly need to grow and thrive.

“Combined with improved transport infrastructure, this approach will benefit not only the North but the whole of the UK economy, as the advanced capabilities will attract companies from China and elsewhere.”

High on the agenda is a renegotiation of the UK’s role in Europe and several high profile names have spoken out on the debate. One such figure is JCB boss, Lord Bamford, who told the BBC in May, that the UK could exist “peacefully and sensibly on its own”.

Following Bamford’s comments, president of Airbus’ UK operations, Paul Kahn, revealed that investment in the UK would be reconsidered in the event of Britain leaving the European Union. Kahn was not the only one countering Bamford’s comments, Chris Aylett, CEO of the Motorsport Industry Association, was emphatic that remaining in the EU was the smartest move for the UK for so many reasons, particularly for skills and trade.

Aylett outlined the very real crisis in finding the right talent right now for growing SMEs and industry pointing out that “highly qualified, skilled people” are “adequately available in Europe and we should go like hell to find them”. Not only to fill the skills gap but the EU is important in that many industries in the UK view Europe as their domestic market, one of which is the Motorsport industry, “because we compete their every weekend” and to interfere with the trade agreements could be catastrophic.