George Edwards, 18 years old and a recent sensation in manufacturing and industrial policy circles talks to Jane Gray about his ambitions and how to bridge the skills gaps by increasing empathy with his generation.

“The financial side is great. But the fact that this product which I thought up is going to be made – that’s what is most meaningful,” enthuses George Edwards as we discuss a recent deal to licence the manufacture of Gas Sense, his invention, to Irish pump maker Whale.

Gas-Sense is a simple but valuable product which accurately measures the amount of gas left in canisters by using a string of temperature sensors to find the cold area between the liquid and the gas level in the container.

Mr Edwards developed the product as part of his A Level engineering course work but was prompted to patent it and seek out commercial opportunities after receiving intense interest at the Big Bang Science Fair’s annual Young Engineer for Britain Competition where his project was highly commended.

“It was actually really moving,” says Edwards, recalling his return to school after his first visit to Whale. “That was the first time that it became really apparent that this was actually happening – the real thing. Before that, despite what a lot of people had said, I still only really saw Gas-Sense as a school project. And then the penny dropped. This is going to be a real product, on shelves, which people will buy and use.” 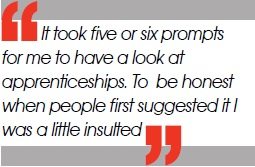 Edwards now looks forward to a year working with Whale two days a week to develop Gas-Sense for market entry in early 2015. Sales of about 20,000 units are expected in the first year.

Alone, this achievement for such a young individual would be remarkable. But Gas-Sense might merely be called a platform for the activities that have recently shot George Edwards to prominence in the world of engineering and industrial policy.

In December 2013, Edwards delivered a compelling, no-holds-barred, presentation at The Manufacturer Directors’ Conference in Birmingham (see video below), which criticised the incoherence and lack of empathy for young people in the majority of engineering outreach work.

Listening to his presentation was fellow conference speaker and MD of BAE Systems, Nigel Whitehead.

“He decided to champion my views,” explains Edwards. “He summarised them and sent them to an MP he is in regular contact with Sir Peter Luff who then took a series of quotes from me to help support an upcoming debate in the Commons.”

That debate was the session which saw a unanimous vote to support the implementation of recommendations in the Perkins Review of engineering skills, a highly acclaimed publication released towards the end of last year.

Mr Whitehead has also taken it upon himself to champion Edwards’ professional development by offering a placement for several months at one of the defence manufacturer’s UK factories.

“I’m touring BAE’s facilities at the moment deciding where and what I want to do when I get there,” says a delighted Edwards.

More irons in the fire

But, unsurprisingly for such a proactive young man, there are other commitments, beyond his schooling, that will need to be completed before the BAE stint can begin.

Edwards has already spent a summer holiday working for international cosmetics manufacturer Coty, developing a robotics training cell where existing and new staff can get to grips with new manufacturing technologies.

Training will be formally rolled out to employees this summer and will help them learn about working with robots and overcome misconceptions about the consequences of automation for their work.

Once A Levels are out of the way, Edwards will spend a few more months with Coty improving the flexibility and capability of this cell.

“I’ll also be working on one of their ‘trouble lines’ to look at process engineering opportunities to make it more efficient,” he says.

Working with automation technologies at Coty, a factory Edwards raves about for its ability to alter the negative preconceptions many of his peers have about manufacturing has made a strong impact on Edwards.

“I absolutely love working at Coty. My friends were completely taken aback when I took them round by the technology, the whole environment. It’s amazing and challenging work,” Edwards continues.

“It’s often understanding the interface between the human element and the technology which is fundamental to solving problems in complex automated manufacturing systems and the problem-solving approaches for that were something I had never encountered before my time with Coty.”

Edwards’ experiences at the Kent-based factory have had a major influence on his ultimate career ambitions. “I’d like to work at a high level, either developing and selling my own system solutions or working as a systems design engineer for other people’s solutions – ideally I’d also like to work autonomously, to be self-employed.”

So what further education options will Edwards follow to accelerate him towards this goal?

A university degree has been the de facto choice. While the alternative of a higher apprenticeship has raised its head, Edwards admits that despite his relatively enlightened knowledge of manufacturing and engineering career paths, he still had strong preconceptions about vocational qualifications being unsuitable for the academically gifted.

“It took five or six prompts for me to have a look at apprenticeships,” he shares. “To be honest when people first suggested it I was a little insulted.”

Edwards is not easily satisfied by any of the further education options at hand in the UK however, and has set his sights on a spot at the prestigious Massachusetts Institute of Technology in America.

Explaining why this is, Edwards observes, “Engineering degrees in the UK are funny. I don’t like the idea that you have to specialise right away. When you’re at school it’s hard to get a grasp of all the different variations of engineering – so how can you make a decision about what you want to end up doing for the rest of your life? Also – I want a degree that is hands on – not just theoretical.”

Whatever the education choice, one thing is in no doubt, George Edwards’ career shall be watched by many of the most influential figures in industry and industrial politics with interest.

Much of the recent attention and acclaim George Edwards has received is due to his articulate analysis of the failures of engineering outreach programmes and careers advice for his generation.

A great deal of what he says has been identified before in skills reviews and industry thought leadership forums, but coming directly from a young person, whom adults too often try to speak for, his words have added potency and insight.

“There’s not a lot of empathy in the engineering community for my generation,” comments Edwards. “I don’t think they understand how and why my generation perceive things or how to address that.

“Education has changed dramatically from when the vast majority of engineering executives were at school. People don’t understand engineering today as they did then,” he says. What Edwards means is that his peers don’t believe anything is made in the UK anymore. Of course today’s industry executives are acutely aware of this misconception, but Edwards’ point is that they aren’t going the right way about altering it.

“There is a lot of ‘noise’ made by education and schools outreach programmes in the engineering and manufacturing sector, but little coherent message as far as I have experienced – at least not that really makes an impact on my peer group.”

Greater centralisation and standardisation of the modes of engagement between manufacturing companies and schools would make things easier on both sides says Edwards. It would help to create a more consistent and rational message that young people can follow about the kinds of career opportunities available and the perks of the jobs involved – like pay scales, opportunities to travel and the chance to contribute to sustainability and environmental challenges.

Edwards is also scathing about the quality of careers advice available for engineering and manufacturing – even in his own public school environment or in well-funded state schools.

“Engineering is particularly poorly served for careers advice,” he confirms. “Even in a school with quite a good careers department, you’d only come away with a couple of pages of information about engineering, while you’d come away with reams if you said you were thinking of becoming a lawyer or an investment banker.”

And when it comes to teachers delivering effective careers guidance, an anecdote from George’s own experience shows how even the most well intentioned tutors are simply out of touch with the reality of the rapidly evolving work environment of a modern factory.

“At King’s Canterbury we have form tutors who are responsible for helping us think about our education more holistically and looking to the future.

“My tutor is a maths teacher who studied Chemical engineering at Cambridge – not that long ago. Yet when he had a factory tour at Coty after I’d presented the results of my work there, he said he had completely forgotten how exciting manufacturing is.”

Driving his point home, Edwards concludes: “If someone with relatively recent experience of industry and a technical degree in a relevant field can feel out of touch with manufacturing and engineering today, just imagine how disconnected other teachers are! And yet they are expected to advise us on our careers.”

Part of the solution is to increase the visibility of industry role models, says Edwards. His own personal hero is Mark Koska, an engineer who developed a new type of disposable syringe which has been credited with saving 60 million lives by halting the spread of AIDs via contaminated needles in developing countries.