Exporting in the face of uncertainty

Posted on 1 Sep 2016 by The Manufacturer

Bolstering UK exports could be key to economic growth. The Manufacturer glimpses into manufacturers’ exporting attitudes in the wake of Brexit.

As the dust settles on the United Kingdom’s vote to leave the European Union, the UK manufacturing community is accepting the situation and getting down to business in the face of uncertainty.

Institutions such as EEF have reported a tumble in confidence for manufacturing firms, which expect trading conditions over the coming months to weaken. In fact, a recent report by EEF revealed that 29% of firms surveyed were bracing themselves for decline, 7% reported a decrease in UK order volumes and 8% admitted a fall in EU export order volumes.

What is clear is that the number of firms reporting decline is small and the larger numbers are only, at this point, speculation. So far, the majority is experiencing little to no change in these areas. The only fact industry can be certain of is uncertainty.

Now more than ever, the future of UK economic growth rests, in part, on manufacturing businesses investing in exports. Charles Garfit, head of manufacturing (UK) at Santander Corporate and Commercial Banking is adamant that firms should not let doubt prevent them from taking the plunge.

“Naturally there is uncertainty following the vote to leave the EU, however there are significant opportunities for UK manufacturers to export across Europe and beyond, perhaps even to markets they may not have previously considered,” he said.

“The weaker pound should also help manufacturers that are considering exporting and they should make the most of this competitive advantage.

“Businesses that export tend to grow faster than those that are solely focused on their domestic market and are also more resilient because of that diversification. For those that are new to exporting there is a wealth of information available from the government, banks and other business groups such as the International Chamber of Commerce.

“It is important for British businesses to recognise that they are part of a great trading nation whose products and services are in demand across the world.”

No matter the size of the manufacturing company, there is no question that the rewards from selling products overseas can be significant. Exporting can boost company profile, credibility and most importantly a firm’s bottom line. Foreign markets can offer access to brand new customers, income, as well as valuable business opinions.

By investing in export activity, firms can boost a product’s commercial lifespan, spread the business risk and secure economies of scale, all of which is not always viable in the UK.

And although headlines of late have been dominated by stories of doom and gloom, not everyone is down in the dumps on Brexit.

Lord Anthony Bamford, chairman of construction equipment firm JCB, was always vocal in his desire to leave the EU and commented that the UK could exist “peacefully and sensibly on its own”, adding that there was no reason the UK couldn’t “negotiate as our own country, rather than being one of 28 nations.”

Following the news of the UK’s departure Lord Bamford said, “We [JCB] remain positive about the future. European markets are important to many UK businesses, including JCB, and this will not change.

“We should look ahead to opportunities to trade more freely with the rest of the world, as well as building on existing trading relationships with customers and suppliers in Europe.

“The UK is the world’s fifth largest trading nation. We therefore have little to fear from leaving the EU,” he added. And this may be true for many large companies, but what about Britain’s SME community?

Back in 2012, the former Prime Minister David Cameron, said that if the proportion of SME exporters increased from just under 20% to 25% it could add £30bn to the UK economy.

Rowan Crozier, managing director of SME contract presswork and stampings firm, Brandauer, told TM, “I’m still coming to terms with it. I had been vocal about the importance of remaining.

“It’s now down to the business to protect itself from what might or might not be.” As expected, Crozier hasn’t seen any immediate change, however what is encouraging is that the firm has received new orders since the referendum.

“I’ve had two orders, both in different markets. One is a Dutch company, and the other is an American-owned German business, an area of the world which I thought would be risky. This company is actually moving existing business from a German-based competitor to Brandauer. It won’t change the world for us, but it is a good, positive signal. I think that’s worth noting.”

While there are opportunities to be capitalised on, the challenges are real and Crozier explained that Brandauer’s customers in the EU, in particular, may become unsure of how they want to buy in the future. For Crozier, this has an impact on the rest of the business.

“We’ll keep pushing our customers for more vision and commitment. That has had an effect on our investment strategy slightly, we still will invest, but more carefully. We are still investing in kit. This quarter we have had approval to spend the best part of £100K to spend on kit. We could have been spending a lot more if the landscape was more certain,” he explained. 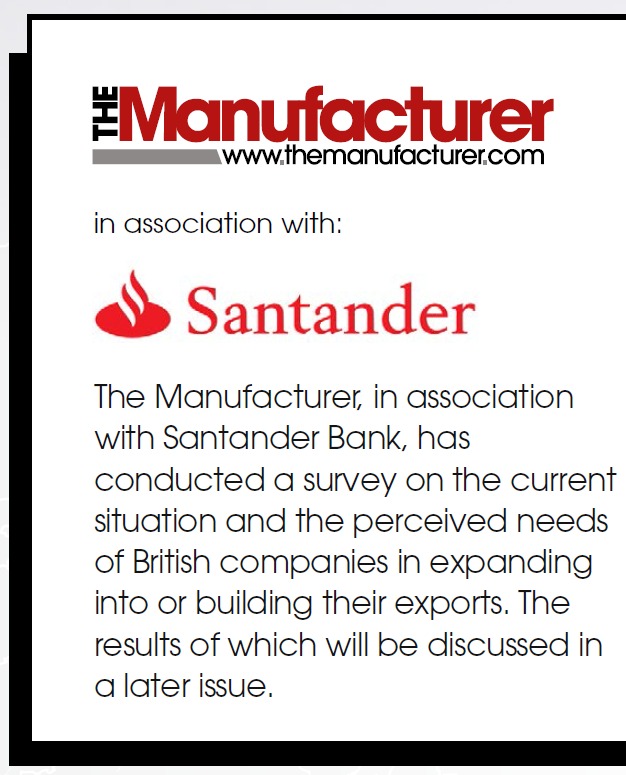 If manufacturers are to navigate the export challenges created by Brexit and take advantage of those exporting opportunities, they will need appropriate support. Crozier urged government for “swift decision making” and “a clear and concise direction”, and there seems hope for this with the introduction of the Department for Business, Energy & Industrial Strategy.

For manufacturers, particularly those that are keen to start exporting, the key priorities are safeguarding access to key markets for goods and services; financial stability; securing regulatory certainty; bolstering a domestic policy concentrated on supporting investment; and continued focus on addressing the skills gap.