The incredible Bloodhound SSC has one almighty and unrelenting appetite when it comes to being fed by its supply chain. Callum Bentley spoke with the project’s Engineering Lead – Commercial, Conor La Grue to see what it takes to handle such a beast.

For those lucky enough to have stepped inside the Bloodhound SSC workshop in Avonmouth, just outside of Bristol, you would know the friendly and dynamic atmosphere that comes with the close knit team that is building the car which aims to shoot Wing Commander Andy Green past the 1,000mph mark next year.

It was with this knowledge of how the team interacts with people from outside the Bloodhound bubble, that I jumped into my quite laid back first question.

“Conor, how are things coming along out in Avonmouth?” I ask.

I am speaking with Conor La Grue, engineering and supply chain lead for Bloodhound SSC. Without a moment’s hesitation, Mr La Grue runs with it, as if it was the question he hoped I would ask.

“We’ve just signed our biggest sponsorship deal in the history of the project,” he enlightens, his enthusiasm obvious. Honestly, this was not the answer I was expecting; instead hoping to lead him into a conversation about the milestones the team has this year ticked off. Both the vehicle’s cockpit had been revealed earlier this year, and only recently the massive EJ200 Rolls-Royce jet engine had been fixed to the main structure.

But it was clear by La Grue’s tone that this new sponsorship deal, later to be revealed as Jaguar, was big news.

“What this means is that a lot of the remaining structure that we’ve had to order to finish the car, certainly for the front of the car which is predominantly composite, will be delivered before Christmas,” he says. “A lot of the rest of the car, as far as a design standpoint is concerned, will be finished by Christmas. By the end of February early March all of the primary components of the car will be here.”

What this fundamentally means for the Bloodhound team is that the design phase is now wrapping up, and the physical act of bolting the machine together can truly begin. This news is doing wonders for the team’s confidence, as La Grue explains.

“It’s a very exciting time for us, because we’re fully funded through this phase, and we’re going at full speed to get it done,” he says. “The feel of surety for getting the car out in the desert next year is going up and up.

“This is a massive injection of funding at a crucial point from a supply chain standpoint.”

Securing the dog to the chain

Building what is essentially a missile with wheels and a steering wheel doesn’t come cheap – this is no surprise. According to La Grue, up until this point, Bloodhound SSC has spent just over £1m cash spend. On top of this the team has leveraged close to £25m of ‘in kind’ product sponsor support in the supply chain. Considering the car, according to La Grue, is at about 50% completion, there is still a lot more funding to come in to get the car in the desert in 2015.

Conor La Grue will join a line up of other high profile speakers at this year’s Manufacturing Directors’ Conference happening at Birmingham’s ICC on November 26 & 27. To find out more or to register your attendance, visit bit.ly/TMDC2014

“We’ve got about the same to go again in cash parts to spend and, to be fair, we’re probably about 50% of the way through the build of the car,” La Grue says. “We’re not quite at 50% of the component part, but as far as build effort is concerned, we’re about 50%.”

But is 50% where the team intended to be at this stage in the programme?

“That’s the thing,” proclaims La Grue. “This latest sponsorship means this critical phase of completely finishing the design and getting most of the primary structure done between now and Christmas, which is about 80% of the car, the next 20% will be done in the first quarter of next year, most of that is fully funded so really we are masters of our own destiny for the first time in a long time.

“We’re usually chasing for resource, however the bias has shifted recently from getting design headcount in and keeping the supply chain moving, to actually recruiting heavily for the assembly team.”

It’s seems a bit nonsensical to say managing the supply chain of such a unique and highly engineered project like Bloodhound is a massive task – what part of putting this incredible machine together isn’t? But I press on, quizzing La Grue on how he can even begin to handle the pressure, along with suppliers, of meeting such strict construction guidelines within even stricter deadlines.

“I’m very lucky I’ve got great support here from the design team as far as design liaison and design for manufacture is concerned, and I work very closely with three guys form a company called Overmarsh who are a supply chain specialist and, basically, my extended team.

“I take great pride in the relationships that we’ve developed that, as a team, we’ve been able to deliver to this level of first-time quality because some of the bits are really difficult, really juicy, chewy bits, and they’re a real challenge. Some of the partners have done the most extraordinary work in the strictest of timelines and we’re getting there now. We are starting to see the reality that we will be running next year – we’re going to get this thing finished. It’s been a real battle, the project survived and thrived through the deepest recession and it’s going against the flow and the level of support we’ve had is quite extraordinary.” 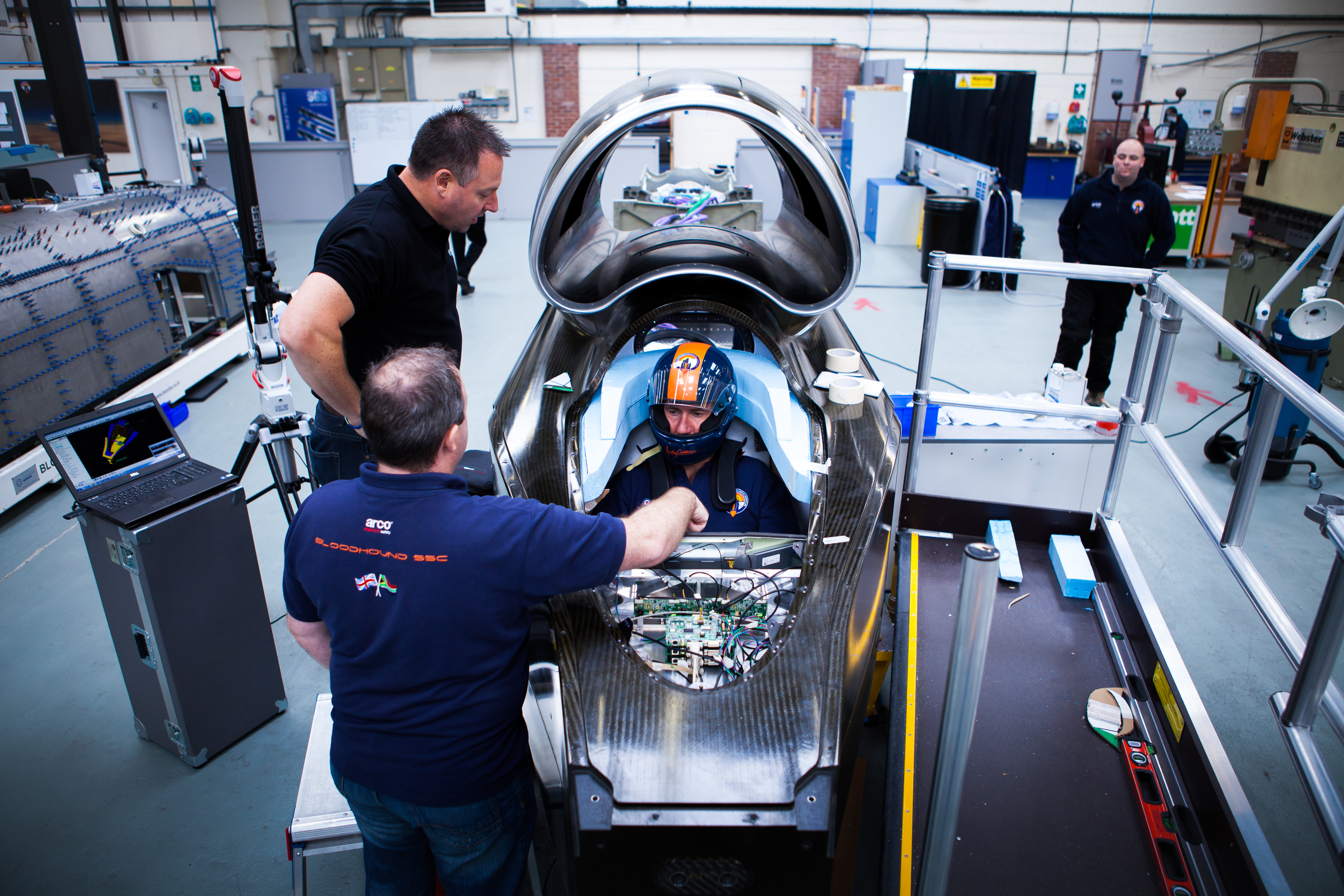 Now in his seventh year working on the Bloodhound SSC programme, La Grue says he is still working with individual partners who have changed companies up to three times, but are still willing to throw support behind the project when needed.  He says, as with any proper supply chain management, relationship building is critical to success for all parties.

“It’s a long burn project, but we’re completely blessed. Some of our key partnerships, they just keep surprising us and they’re completely invested. It’s important to them that it succeeds. They’ve aligned their brands with ours, and as with any good business and any good supply chain, it’s about those business to business relationships and developing a culture of trust. They’re an absolute extension of this team and arguably you can call Bloodhound the biggest team in the world.”

While speaking with La Grue, the occasional workshop sound would come down the line, interrupting conversation – not something unusual when you are in the line of business I am. But there was reason for the sound of heightened activity at Bloodhound HQ.

“Another key activity happened this morning,” La Grue says. “They bolted a couple of key components in that link the EJ200 to the lower chassis. They’ve gone in the first time, which for me is quite extraordinary.

Quite remarkably, according to La Grue, Bloodhound has a less than one per cent rejection rate on components. Considering how many of these parts are one offs and extremely difficult to manufacture, the attention to detail from the Bloodhound design team and it’s supply partners is testament to the dedication form all parties to this project.

“Those outside companies that form our supply chain and our technical partnerships, they are absolutely part of the team. It’s not one individual in any department or area, it’s completely reliant on everyone working together,” he says. “The guys in design have this uncompromising requirement that we have to meet where we have to make things as easy to make as we can, but the engineering requirement – getting a man safely to the flying mile and back again faster than a high velocity rifle round – is pretty uncompromising when it comes to the engineering and the materials.”

If the Bloodhound SSC programme had to be summed up in one word, that word would probably be “ambitious”. As La Grue explains, the programme actually launched the same week as Lehmann Brothers collapsed. Public and private investment was not interested in pouring money into a car that aimed to break the 1,000mph mark.

The programme had to find a different focus. As La Grue explains, that focus was education.

“It’s at the heart of it,” he says. “Let’s be fair, the project wouldn’t have survived the recession and wouldn’t exist if it wasn’t for the education programme at the heart of everything that we’re doing.

“We launched the same week as Lehmann Brothers went under, there was no appetite for multi-million pound fast car programmes for the sake of speed. But a programme to encourage kids to take up STEM subjects in school and help with the massive shortfall of engineers in the UK, that was something that big companies wanted to talk about because they were set to benefit themselves. 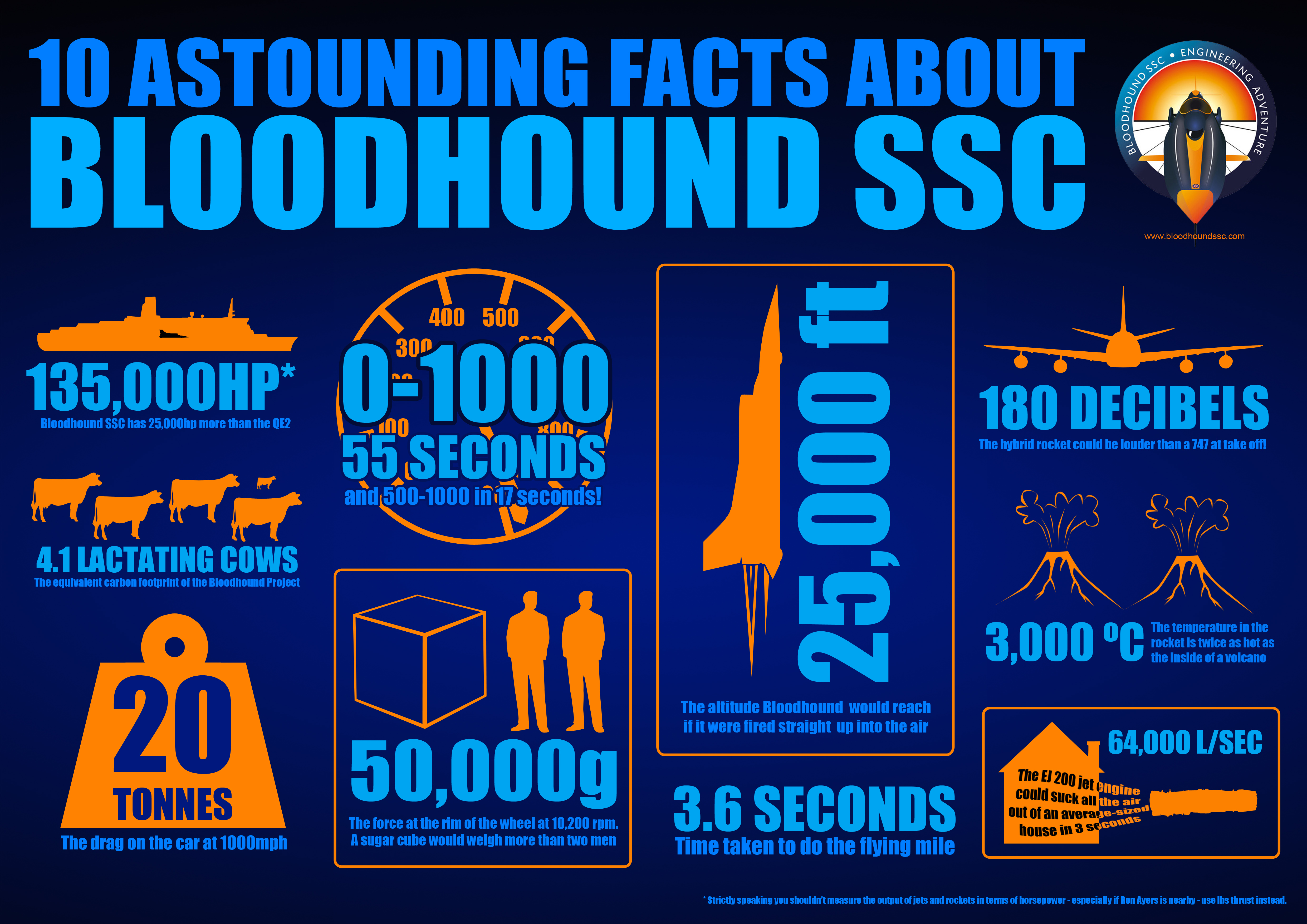 “The land speed record car is just the entertainment, the inspiration and the stimulation we need to get kids interested in how we developed it and explore whether or not they themselves would be interested in having that as a career choice too.

“And we’re sharing every intimate detail of it too. We’re the highest technology open source project on the planet. Formula 1 can’t share because of the need for a competitive advantage. We share absolutely everything so big kids and little kids can geek out as much as they like and the education programme is growing all the time.

“Sharing them in this way, in an open source way, is remarkable. When kids go to shows and they can see and touch an EJ200 – £4.5m if you could buy one, and we’re the only people that aren’t a nation with a typhoon squadron to have access to that engine – you watch a kid’s face exploring that engine and it’s remarkable. I would love to see more stuff like this. The reality is that a project like bloodhound is probably a once in a generation thing.”