Employment Tribunal claims are a fear-factor for many businesses, and the Government says this fear is stifling job creation. By making it harder for employees to lodge claims, it hopes employers will be more confident in hiring new workers. But will proposed changes have a real impact on UK unemployment? Tim Brown reports.

On average only 25% of claims get as far as a tribunal and the rest reach a settlement or are withdrawn. But even so, those headline numbers are staggering and an understandable concern for employers. With approximately 62 million workers in the UK, that equates to 3 claimants per thousand workers.

The Government picked up on employer concerns in its consultation paper Ending the Employment Relationship. “Such concerns are driving various Government proposals to give employers additional tools to hire and fire staff more easily,” says Nikki Duncan Partner at law firm Michelmores. “The combination of these changes is undoubtedly likely to make claimants think twice about lodging claims.”

Paula Whelan, employment law partner at law firm Shakespeares, says that in its current form, the unfair dismissal claims process is often perceived as being weighted in favour of the employee, but that the changes should help reduce the risk for employers.

“A decision to settle tends to be reached when you are actually staring down the barrel of a day in court” – David Beswick, partner at Eversheds LLP

“Access to justice is still a priority for those bringing more serious allegations,” says Ms Whelan. “But the combined effect of the changes, particularly the requirement for employees to have two years service in order to proceed with the claim, undoubtedly discourages time wasters. At a time when all employers are focused on cost management, this should help encourage more hires.”

Currently the maximum compensatory amount for unfair dismissal is £74,200.

The proposals, which come into force this summer, suggest that the maximum payment will be one year’s pay or £74,200, whichever is the lower. Considering the national average salary is approximately £26,000, this will essentially be the cap on unfair dismissal payments for most workers.

On the other side of the coin, less scrupulous employers could be tempted to unfairly dismiss higher paid employees because it is cheaper than going through the proper disciplinary procedure.

The fees due to take effect this summer will include a £160.00 charge to lodge a claim plus a £230.00 hearing fee for straightforward cases such as those for notice pay. A £250 to £950.00 fee will aplly for more lengthy cases such as unfair dismissal. There has been a discussion about an exemption for those on low incomes but this would mean the original intentions behind the fees may become diluted.

The fees might achieve the objectives of stimulating job growth, but they might also deter genuine claimants who, having lost their job, dare not risk, or cannot afford to pay fees. According to David Beswick, partner at Eversheds LLP, most employment tribunal cases settle in the last three days before a hearing. He says that the idea of bringing the hearing fee in is “to get those settlements a greater distance than four weeks before the hearing date to help the efficiency of the tribunal service.”

Mr Beswick says he believes in the merits of the system but is not convinced it will help bring settlement dates forward. “Everybody believes that early settlement is the right way for everybody to go. However, as in most litigation, a decision to settle tends to be reached when you are actually staring down the barrel of a day in court.”

Moreover, Tony Burke, assistant general secretary at Unite the Union, says the tribunal fees might actually reduce the instances of settlement and further clog up the tribunal process. “It’s going to make it much more difficult to achieve pre-tribunal dispute resolution. If people are convinced by their cases and have to put money up they are less likely to reach a compromise. What you’ll find is that people are more likely to go all the way to the tribunal.” Mr Burke says that any suggestion that the fees will weed out vexatious claims is “nonsense”. He says that the existence of such claims are highly overstated. 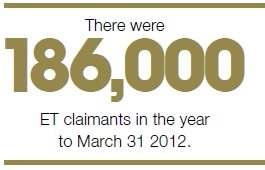 Whether Burke is correct or not it is certainly true that some tribunal cases could be better dealt with outside of the tribunal system. Independent research has found that the Acas helpline helps avert around 14,000 employment tribunals a year. Last year this voluntary helpline dealt with 925,000 calls from employers, employees or their representatives.

The introduction of mandatory consultation with Acas will mean parties will initially be encouraged to work through their problems via mediation. Where a solution cannot be found, parties will then be assisted in reaching settlement, rather than progressing immediately to tribunal, as a part of the Acas Early Conciliation Scheme. This should reduce the number of claims that actually require a tribunal at all.

However, this system does seem to shift the workload from the Tribunals to Acas and doesn’t suggest to employers that they will be less likely to have complaints lodged against them. Indeed some employees might see the Acas route as an easier option to make an initial claim for settlement.

Will the changes help get more people into work?

All the upcoming changes to the employment tribunal rules are designed to lower the risk of tribunal costs for employers by discouraging frivolous claims.

The frequency of such vexatious claims is relatively low, but Acas should help reduce the number of tribunal cases by helping to resolve cases before the tribunal stage. However, it is feasible that legitimate claims could become easier to lodge through Acas. While the risk of tribunal costs would be reduced, the potential settlement costs could be even greater under the new system.

The real question is whether these changes will actually result in the creation of more jobs. When asked, the response from manufacturers has been mixed and it appears that only time will tell.

If the employment tribunal measures fail, the introduction of fees will reduce worker access to justice while providing little benefit to employers.