A new study from Lloyds Bank Commercial Banking says firms in England and Wales’ food and drink sector are preparing plans to create tens of thousands of new jobs in the next five years as they look to drive growth at home and abroad. 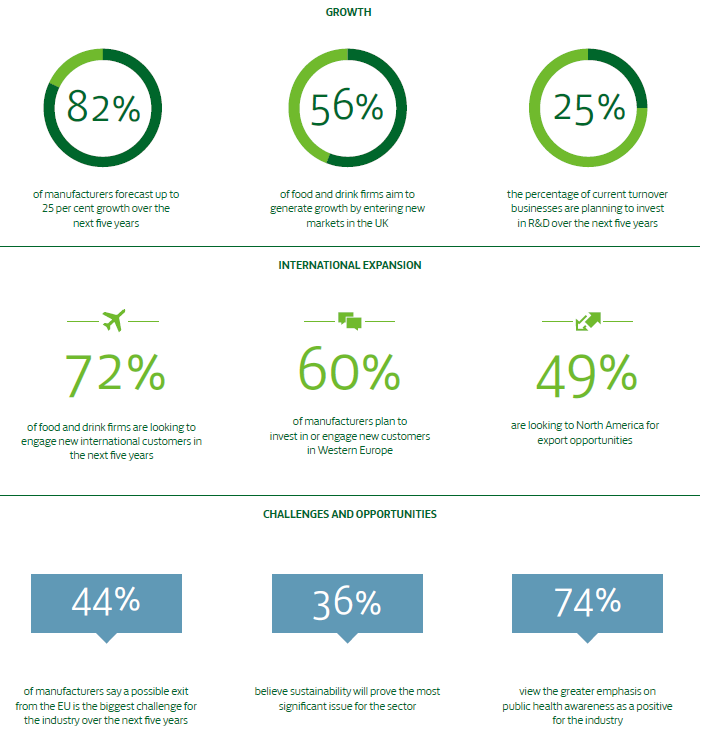 The second annual study, which surveyed English and Welsh producers of alcohol, fresh produce and food and drink products, examines the opportunities for – and challenges faced by – the industry over the short to medium-term.

The forecast for job creation in this year’s report is strong, with firms planning to create more than 73,000 new jobs over the next five years.

Against this backdrop, just over a third (34%) plan to drive business growth through job creation.

However, with the sector facing the retirement of hundreds of thousands of workers by 2020, over a quarter of survey respondents (28%) cited a lack of skilled labour as one of the biggest challenges facing the food and drink industry today.

Head of mid-sized business at Lloyds Bank Commercial Banking, Andrew Connors commented: “The contrast between the 2014 report and our latest research is really positive, with significant job creation and investment figures revealed.

“Productivity presents an ongoing challenge for the UK economy. Against this backdrop, the continued commitment from food and drink manufacturers to drive productivity and innovation through R&D is a clear indication of the crucial role this sector plays in the broader economy.”

The majority of firms are focused on both entering new markets in the UK (56%) and developing new products (55%), as a way of achieving their growth ambitions.

The cautious approach to spending and investment adopted by many companies post-recession is evident in this research. The majority of respondents (53%) will fund growth using cash reserves, followed closely by cash flow finance at 45%.

While Western Europe remains the most popular target export market amongst respondents (cited by 60 per cent of businesses), North America has overtaken the Far East and Asia since last year to become the second most attractive export destination, driven by significant demand for dairy products – in particular cheese – from the United States.

With 88% believing English/Welsh produce has an excellent reputation internationally, the same number is activity capitalising on the heritage of their produce overseas.

“Although many of the most dynamic and best-loved food and drink brands originate here in the UK, our producers are exporting innovative techniques and ways of working worldwide. This report confirms that trading internationally is a real driver for growth, especially the opportunities offered by non-EU markets and developing economies.”