Scientists at BAE Systems and City, University of London have revealed how research work on how falcons fly is inspiring new technologies for future aircraft that could contribute to their safety in the air, aerodynamics and fuel efficiency.

The scientists have reportedly developed several concepts following research into how the peregrine falcon – the world’s fastest bird – is able to stay in control and airborne at speeds of up to 200mph, even in high winds. These technologies could be applied to future aircraft within the next 20 years.

The technologies being developed include ‘sensory feathers’ – 3D-printed polymer ‘hair’ filaments which would act like sensors on the body of an aircraft, providing an early warning system if it began to stall.

Similarly, more densely packed passive polymer filaments may also be capable of changing the airflow very close to the surface of the aircraft which could counter ‘drag’ on the aircraft wing-skin, which ultimately slows aircraft in flight.

A further technology has been inspired by the falcon’s ability to stabilise itself after swooping or landing by ruffling its feathers.

Small flexible or hinged flaps on an aircraft could allow the wing to manoeuvre quickly and land more safely at lower speeds. The added safety margin gained using this approach could allow future aircraft of a more compact design or to carry more fuel. In addition, the research so far has shown that the flaps could potentially lower aircraft noise pollution. 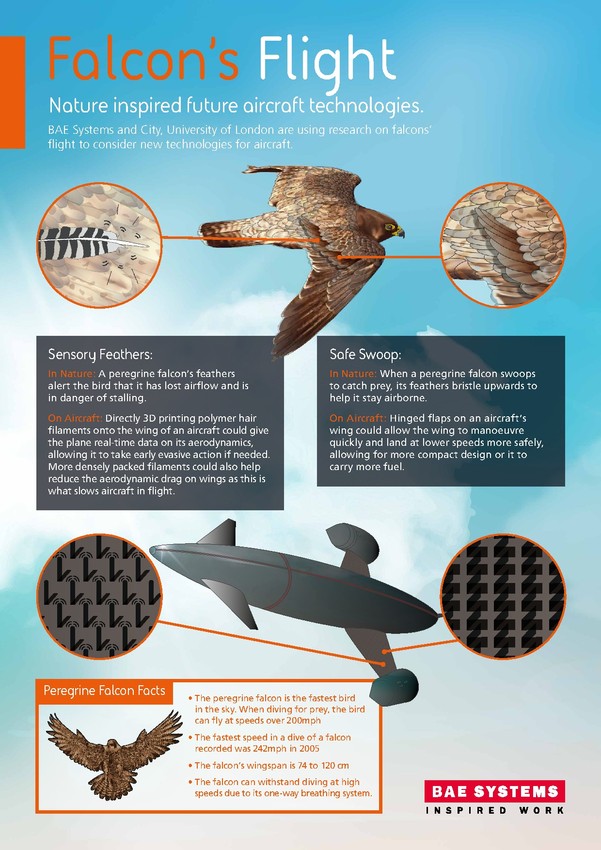 Professor Christoph Bruecker from City’s Aeronautical Engineering department, explained: “The peregrine falcon is the world’s fastest bird, able to dive for prey at incredibly steep angles and high velocities. The research work has been truly fascinating and I am sure it will deliver some real innovation and benefits for the aerospace sector.”

Professor Clyde Warsop, a specialist in Aerodynamic Flow Control at BAE Systems’ military aircraft based at Filton in Bristol and Warton in Lancashire added: “Working with Professor Bruecker and his team at City, we’ve investigated how we could apply the unique abilities of the peregrine falcon to aircraft. Bio-inspiration is not a new concept; many technologies that we use every day are increasingly inspired by animals and nature.”