How should the UK government stimulate manufacturing growth?

When a new Cabinet is named, the focus is generally on the Prime Minister and the Chancellor. Rishi Sunak’s new team, announced as this is being written, includes Grant Shapps as the new Secretary of State for Business, Energy and Industrial Strategy.

I include the full title to illustrate the broad reach this job has, and I would argue that the person with the most influence on wealth creation in the UK is at least as important as the new PM and Chancellor.

Shapps takes up this new role as manufacturing stares over a cliff edge in the UK. That is no vague use of hyperbole for effect – every manufacturer reading this who is contemplating their power bills knows exactly what I mean.

Some are in the midst of three-year deals, or similar, and may have no immediate worries.

Others are trying to negotiate new deals but are looking at 100% increases which, in some cases, amount to more than their net profitability.

It really is as simple as that.

The Energy Bill Relief Scheme for non-domestic customers is set to run, initially, for six months from 1 November to 30 April. For many businesses, manufacturing or otherwise, this is merely a stay of execution.

There have been suggestions that some form of help will continue but we don’t know how or when, or for how long.

And therein lies the rub.

We need a much clearer idea of when and how the help from the government will come. Six months’ support is not enough to stop business owners from making key strategic decisions such as moving their business abroad, especially if those owners are foreign parents.

Manufacturing businesses don’t take strategic business decisions in six-month cycles. They have to plan for the medium to long-term, such is the nature and scale of innovation and investment decisions.

Unless the new Business Secretary gets to grip with the key issues at the heart of manufacturing’s problems, then this could jeopardise key elements of manufacturing supply chains and have the effect of creating business failures, redundancies, and the knock on effect of unemployment on wider economic policy – and all in just a few months.

The current full employment status is so fragile because the loss of one manufacturing job, invariably causes 10 others. We know this from the past impact of key OEM and Tier 1 supply chain failures in the past.

Every time we lose a link in the supply chain, the potential need to import increases, and with the current dollar pound rate, this is more expensive too. On the other side of the coin, those manufacturers winning export orders are benefitting more than they might have expected.

Manufacturing is key to the economic success of this country and while cost pressures continue to increase, manufacturers are constantly seeking savings.

Where innovation can be achieved, investment is invariably required, and this brings us to another issue: capital.

Many businesses have still got Coronavirus debt to deal with and banks are understandably reluctant to lend to highly geared businesses in an uncertain economic climate.

But investment is needed, especially investment in green processes and green energy production.

Much has been said of the thousands of acres of industrial rooftop spaces that could accommodate solar panels but, just as going green requires significant available capital for domestic users, the cost for manufacturers will be far greater.

We need a strategic government approach that will help unlock green investment and this will require assistance and encouragement.

To incentivise manufacturers and drive ‘good behaviours’, we should be looking at tax allowances in the order of 150% to 200% to make an irresistible case for investment.

The case needs to be strong and robust, especially where there are overseas parents, to persuade board members that now is a good time to invest.

A six month stay of execution on the power front is welcome but is not an answer. A joined-up industrial strategy is long overdue and must be Shapp’s first priority.

Our manufacturing base is key to the growth initiatives championed by the Conservative Party in government and also the aspirations, at least, of all political factions.

We cannot afford to lose our manufacturing base. It powered the economic success of the last economic cycle.

Workers in manufacturing are high-earning individuals who spend their incomes and support the service tourism and leisure economy.

If we lose this base, then we will never rebuild it, and we could then be looking at a sustained period of key underlying unemployment and a generation devoid of aspiration as a result, both in the manufacturing hotbeds of the country and beyond.

Industrial bodies such as the Confederation of British Metalforming, based in West Bromwich, the industrial heartland of the UK, are calling on the government to:

In the same manner that the incoming Prime Minister Rishi Sunak called on all in government to unite behind him and drive the country forward, manufacturers are calling on the new Business Secretary to provide clear leadership and a strategic plan for UK manufacturing that we can all get behind.

To read similar articles to this, check out our Leadership channel. 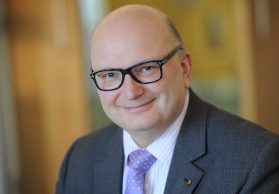