How to become a self-driving factory of the future

Digital technology is redefining what it means to manufacture, but how can businesses best leverage technologies to their ultimate advantage and become a self-driving factory of the future?

The road to seamlessly integrating digital technology into manufacturing businesses is a windy one.

But, the benefits of cohesively introducing AI-led systems are virtuous; they can optimise production, operations and transform entire business models.

“Historically, manufacturing and data science have existed separately. We need to bridge that gap to really maximise the potential digital technology holds for the manufacturing industry,” Rebecca Brooke, Business Development Manager at ECC.ai, tells The Manufacturer.

For manufacturers to optimise their businesses, Brooke believes leaders need to leverage advanced technologies. They need to think big, map out their “moonshot goals” and  exploit the capabilities digital technology holds to accomplish them. Is that easier said than done though?

AI-led systems can aid businesses in their fourth industrial revolution journey, and help manufacturers reach objectives they perhaps never believed they could have historically.

To do this, the company builds a digital twin of a manufacturer’s existing system. Brooke explains: “One of the challenges of working in the manufacturing industry is that very expensive machinery in real-time operations makes for a high-risk environment for introducing new intelligent systems.”

To counter this, ECC.ai build a digital replica of the physical process, which they validate alongside the real-world system.  They can then test optimal control policies on the twin before deploying them on the real equipment.

This incurs minimal loss in production or down time spent testing out potential new technologies. It can allow manufacturers to realise the benefits of utilising advanced AI-led technology, such as the savings it can generate, and the overall improved efficiency that can be enabled.

Karel Dumon, Lead Data Scientist at ECC.ai, tells TM: “We build a digital twin and verify its potential in a virtual environment before we touch any assets. This minimises risk and builds trust at the same time.”

He adds: “The system is a copy of the processes in place, and we use it to optimise the original operation. The end result can take different forms, such as a virtual assistant that suggests ways to undertake operations in a more efficient manner.”

The power of data

Historically, manufacturers have been in possession of large quantities of data but all too often it is not being used effectively.

Dumon explains that ECC.ai’s approach is to start with this historical data: “Manufacturers are storing this data, and they know there is much to gain by using it, but they don’t have the means or techniques to access and visualise it, let alone make it actionable.

“We take this data, build a dynamics model with it and make it actionable towards improving their real-time operations. This allows manufacturers to access a whole host of operational benefits through a system that learns over time and adapts to changing context or environment.”

ECC.ai is working with a pharmaceutical company to optimise the energy efficiency of three different cooling engines by intelligently deciding which engine to use as ‘master’, based on their real-time load and individual dynamics and characteristics.

The differing internal structures of the coolers and their self-regulatory systems, coupled with a ‘primary-secondary-tertiary’ cycle model, make for a complex project.

But, the company’s unique algorithms have learned the behaviour of the three engines from previous operational data and by combining these models with the load requests, ECC.ai is training an intelligent agent to decide which setup to use.

In order to achieve this, they used five months of historical logs of time-stamped sensor data (incoming load, delivered load per machine, temperature etc), to establish which system will be most energy efficient.

The self-driving factory of the future

The concept of the self-driving factory may not be so distant. By utilising artificial intelligence to make informed decisions, and then continually using process data to improve systems, the ‘self-driving factory’ could become a realisation.

Brooke explains while there is never a good time to divert resources and attention away from a manufacturer’s everyday operations, business leaders need to prioritise adopting tech innovations to remain competitive, and maintain the country’s position as such a strong manufacturing nation.

Dumon adds what he believes the platform can offer: “We want to evolve towards this real concept of self-driving factories, and that is where our ECC.ai platform can and will be used in the future.”

He concludes: “We try to aggregate all the data and expert knowledge together into a self-learning model to provide efficiency gains and automate certain steps wherever possible.

“In the future, the more steps and actions that are guided by the platform, the more self-driving and efficient a factory will become.” 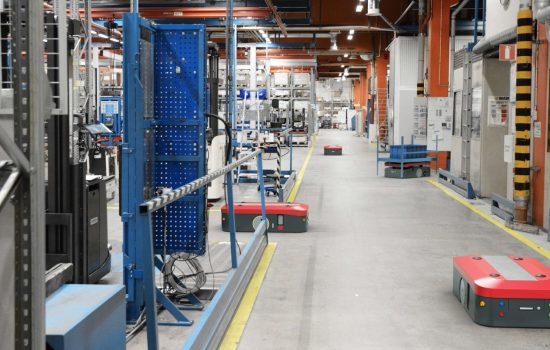