Editor of The Manufacturer, Callum Bentley talks to former Innovate UK chief, Iain Gray about returning to his true love.

I spent 27 years in the aerospace sector and I loved it, and I still love it, but you begin to form this perception that aerospace is unique.”

This is the sentiment that Iain Gray, former head of Innovate UK and now head of aerospace at Cranfield University is having to overcome since moving on from his role within the public sector back to an industry role.

The move back to his roots in aerospace in March this year was a move he made with great anticipation, not so much because of his familiarity with it, but because of the comprehensively broader visibility he could now project onto the sector.

Prior to his role as chief executive at Innovate UK, Gray clocked up almost 30 years in the aerospace sector.

After finalising his studies, he cut his teeth inside the walls of some of the world’s biggest aerospace businesses including British Aerospace, BAE Systems, and finally as director of engineering and then managing director at Airbus UK.

“I spent seven years at Innovate UK,” Gray says. “That broadened my mind in terms of seeing outside the aerospace sector and some of the great things that are going on [in other sectors]. 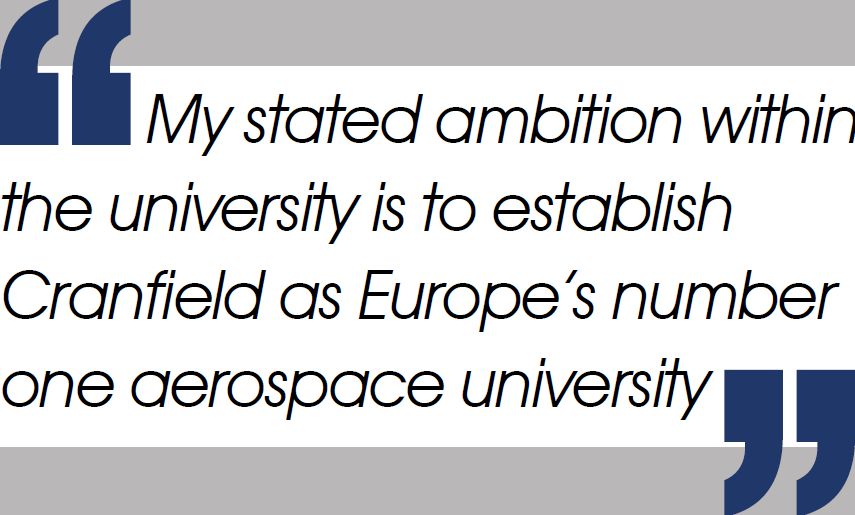 “It introduced me into a much more structured way of doing business between university and industry and seeing more clearly what works and what doesn’t inside these relationships.

“I made my mind up that I wanted to go back into an aerospace scenario and with that industry and public service background I felt I could bring some unique thoughts into academia.”

Gray’s role at Cranfield University Aerospace, as he describes it, is “a much bigger and more embracing role than just business development”.

As director of aerospace, everything that effectively comes under an aerospace theme at the university, comes under his responsibility, whether that is teaching, executive education, research, or business development.

But there is one leading goal Gray is looking to achieve form his new role. “My stated ambition within the university is to establish Cranfield as Europe’s number one aerospace university,” he says. And he’s in a solid position to make that happen.

Cranfield Aerospace Limited is a wholly owned commercial arm of Cranfield University. The arm’s modus operandi, according to its website, is to drive “rapid innovation and de-risking of product solutions for meeting some of the most challenging issues facing the aerospace industry.”

“It’s a university that has its own company; Cranfield Aerospace, which has full regulatory approval for repairs and modifications. There are some real unique assets that nobody else has that already position it in a very strong way.

“But I think in terms of being number one in Europe, what we can do and what we will do is leverage those assets in a much more joined up way. Not just for Cranfield but making those assets available in a broader UK research sense in aerospace. That’s where I would like to position Cranfield.”

And within each of these areas, there are technological challenges which Gray aims to overcome by producing the best, young engineers to feed into the burgeoning aerospace sector. 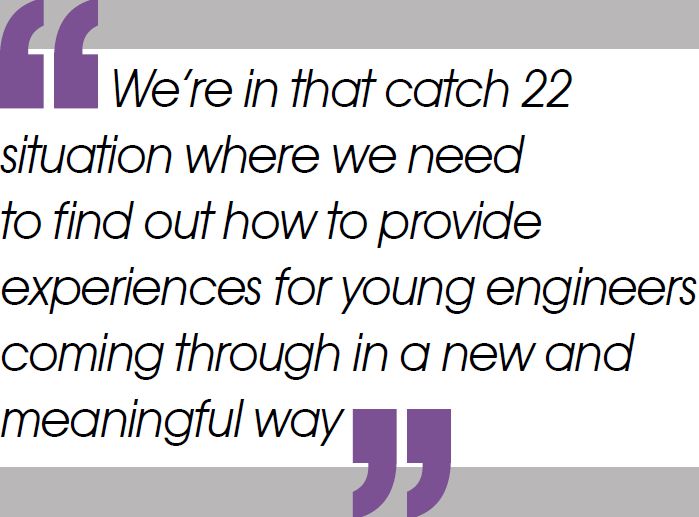 But he is the first to admit that this aerospace sector is far from the one in which he gained his stripes.

“Aerospace is in my blood,” he says. “I loved every minute of it and saw some great highlights – the A380 first flight would probably be the real highlight.

“However, now one of the biggest challenges that I see in a technology and research sense, is that we’re unlikely to see any major new platform developments like this in the next decade.”

So how do we get our young engineers to be trained and developed in a way where they actually know how to apply the research they are learning in a real sense?

“It’s been great over the past decade when you look at Boeing; Airbus; Rolls-Royce, and GE, what they’ve been through in new product development, there have been some real opportunities for young engineers to cut their teeth on new products.

“Whether it’s designing new factories, new ways of working. Whether it be about new engineering solutions, every industry is screaming out for engineers, people with the right skills.

“But now we’re in that catch 22 situation where we need to find out how to provide experiences for young engineers coming through in a new and meaningful way when there aren’t necessarily the new products coming through.”

While what we would perceive as “traditional” aerospace product development such as new passenger models is more than likely to decline over the next decade, the UAV market is set to continue its already massive growth.

According to a 2014 report produced by aerospace and defence market research firm, Teal Group, about $6.4bn is being spent each year on drone technology development around the world.

That number is expected to nearly double in future years, bringing the total amount spent on drones for both military and commercial applications to $11.5bn annually by 2024.

It’s these kinds of figures that excite Gray about the future of the country’s aerospace engineers. “It’s a staggering number and that type of technology and capability is developing all the time,” he says.

“You look at the applications that might exist there around agrifood or smart transport solutions. While there may be large commercial aerospace products, there are lots of opportunities emerging in lots of different markets.

“So from a Cranfield perspective, it’s how we develop the engineers of the future in the current commercial aerospace markets. But how do we also develop the entrepreneurial flair and talent to realise the new emerging opportunities that exist in the non-conventional industries?”

He raises a good point, and while it’s unfair to throw the proverbial blanket over all engineers, the profession is not really renowned for its vehement personalities.

But the saviour to the industry’s challenges might not lie so much in developing personalities, but more the future business models in which they work.

Rolls-Royce has been at the forefront of the service-based switch. The company’s “power-by-the-hour” model has had academics and industry professionals alike studying how taking what was once simply a build and sell model, into a cyclical, fluid and ongoing model which ties manufacturer and customer together over the lifespan of a product.

“I think the business models are changing, and Rolls-Royce have placed a lot of emphasise on the service aspect of the industry in the past decade or so,” Gray says.

“My analogy in a completely different market is the musicindustry. When I first started collecting music I bought LPs, then cassettes and then CDs. Suddenly there was a big switch where I wasn’t buying a physical object, I was getting my music through social media or Spotify or YouTube.

“It’s exciting times and I think the models are changing and will change.”

Changing of the guard

With his eyes firmly locked on his future at Cranfield Aerospace, I feel as though it’s only natural to try and draw him back to his time at Innovate UK, or more so, what he sees for the future of the body.

Since his departure, Ruth McKernan has been appointed as the new chief executive. McKernan does not come from an aerospace background, instead her CV lists a long and illustrious career in the pharmaceuticals industry.

Key appointments include heading research teams in some of the sector’s biggest players including Pfizer and Merck.

No doubt the innovative-rich pharma sector can continue the sector-neutral push for growth in R&D across the UK. But does the old guard agree?

“There’s a remarkable read across between the two sectors. Should aerospace be worried about someone from pharma coming in? Absolutely not,” Gray confirms.

“What you’ve got in Ruth is a genuine leader in a science and technology management industry who’s now leading Innovate UK, and I think it’s terrific.

“I’ve known Ruth for many years. She was doing a great job in her previous company at Pfizer, but she was also playing a very strong role in the innovation landscape and was involved in the Knowledge Transfer Network mechanism, some of the collaborative R&D programmes and even some of the Catapult thinking.

“I think she really brings a lot of capability to Innovate UK.”