IMI Precision Engineering is why I really enjoy getting out of the office and into industry. I’ve been writing about manufacturing for the better part of half a decade, so I’d like to think I’ve got a fairly broad knowledge of the major movers and shakers. And yet, though the name rang a bell, IMI Precision Engineering had essentially passed me by.

The firm has amassed almost 100 years of experience, rising to become one of the world leaders in motion and fluid control technologies. British born and bred, the business operates in more than 70 countries with manufacturing capability in the UK, Germany, Switzerland, the Czech Republic, China, the US, Mexico and Brazil.

It has a combined workforce of nearly 6,000 and is a key partner with more than 100 global blue chip companies, I headed to Fradley in Staffordshire to take a tour around one of IMI Precision Engineering’s four global centres of technical excellence.

Such a broad range sees the site handling more than 9,000 active part numbers and effectively balancing both high-volume, low-value output, alongside low-volume, very-high-value products. Such a feat is made possible by the company’s desire to become as operationally efficient as possible through a deeply embedded culture of continuous improvement.

Plant director Charles Bamford, explained that the site was recognised as a leading example of the wider group’s efforts to not just say it was ‘doing lean’, but to truly embody it at every level.

Having joined the business in August 2016, Bamford oversees the operations and sets the strategic direction of the Fradley site, a core tenet of which is to further the site’s lean transformation. He praised the achievements of his predecessor in starting Fradley’s journey towards more efficient, flexible and agile assembly, but noted that his responsibility was substantially more challenging.

“The past two years have been about getting our house in order,” Bamford told me, “it’s been relatively inwardly focused, gaining momentum and successes by picking predominantly low-hanging fruit in terms of layout and manufacturing process efficiencies. What I would call the ‘bread and butter’ of lean. 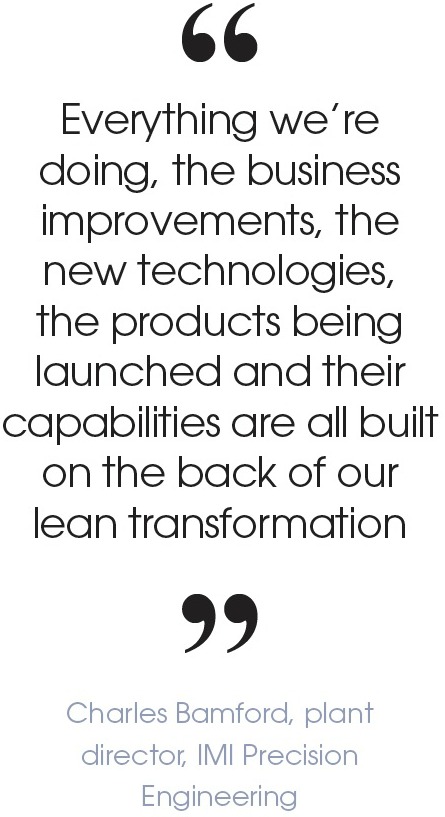 Now the emphasis is very much on the external, leveraging lean principles to deliver better service and outcomes for our customers,” Bamford explained.

With that vision in mind, the group is aware that lean must broaden its focus from just manufacturing to all departments, driving process efficiencies from sales and design, to logistics and support. The sizeable task is already underway and will continue to be refined and expanded over the coming year, said Bamford.

“The same version of lean is currently being implemented across each of our global sites, so we will all be working towards the same standard. There really will be no place to hide, but that’s what you need to drive a consistent level of quality and service,” he added.

During our tour, Bamford pointed out the almost 500m² of shop floor space that had been released through process consolidation and internal efficiencies. Visibly fenced off, he reiterated that the space wasn’t created through a lack of work or a slowing of orders, rather the opposite. He said freeing up space is a sign that a lean transformation is working and should be celebrated as such.

More space has been saved alongside the shop floor where inventory levels have fallen by more than a third over the past two years, coinciding with the move towards more robust, flexible processes.

IMI Precision Engineering’s lean transformation is already beginning to pay dividends outside of the manufacturing space, with new product development (NPD) cycles no longer measured in years, but mere months – a significant achievement when you consider what’s being created is a precision-engineered product.

Supporting, and arguably leveraging, this drive for greater efficiency is the organisation’s approach to digital. A new global ERP system has been rolled out across the group with a new website launched at the beginning of 2017, uniting a dozen or more disparate sites under one single domain.

This unique event offers a one-of-a-kind opportunity for you, and your team, to see the premier enterprise software solutions, in one place at the same time – condensing six months’ research into just one day.

Such a progressive digital attitude creates its own challenges, as Sarah Middleton, marketing communication manager, highlighted. “If you’re going to promise customers instant availability then you’ve absolutely got to back it up and deliver. That’s where the time we’ve invested in creating agile, flexible manufacturing really pays dividends.”

The success of Fradley’s lean adoption will be no more evident than at Hannover Messe this April, where IMI Precision Engineering will launch a number of new products, with a large proportion designed and manufactured at the Fradley site.

“Everything we’re doing, the business improvements, the new technologies, the products being launched and their capabilities are all built on the back of our lean transformation,” Bamford said.

“It’s a constant feedback loop; we won’t stop after these new products have launched and we certainly won’t stop identifying future efficiency improvements. That’s why it’s a journey, an ongoing process.”